Some Of The Most Striking Art Deco Buildings Around The World

This 13-storey building, nicknamed the “Jewel of Downtown,” was designed by architect Claud Beelman in 1930. Standing at a height of 264ft, this building with its four-sided clock tower dominates the Los Angeles skyline. Its blue-green terracotta exterior, along with its golden doorways reflect the lavish and avant-garde lifestyle of the ‘20s and ’30s.

This building was designed by Serbian architect D. S. Petrovitch in 1932 and was influenced by both Art Deco and Neoclassical designs. The Art Deco style is evident by the geometric patterns in the arches of the portico and the ceiling, as well as the four sculptures in the facade that denote four sectors of the Malayan economy — agriculture, commerce, transport, and industry. The former Tanjong Pagar Railway Station is currently being renovated.

Located in the capital city of Asmara, this cinema was constructed in 1937 by Italian colonial authorities. It was built after Italian leader Benito Mussolini’s conquest of the country and proclamation of the Italian Empire. Designed by architect Mario Messina, the building is adorned with 45 lights in the front, along with illuminated letters that spell out “Cinema Impero.” There are several doors with semi-circular handles that lead into the cinema. Its sharp vertical lines, paired with symmetrical yet minimal designs along its windows, lights, and nameplate make it one of the finest examples of Art Deco style. Today, this landmark theatre exclusively screens Eritrean films.

Originally designed to house the new Metropolitan Opera house, Rockefeller Center is one of the most recognisable complexes in New York City, comprising 19 individual limestone buildings across 22 acres of land. Built mainly in the Art Deco style, the buildings feature signature vertical lines, spires, and skyscrapers with crowned rooftops. Some of the most notable Art Deco motifs and sculptures here include limestone panels “Morning, Present, Evening” above 1270 Avenue of the Americas entrance, the carving of Columbia called “Progress” above the 49th Street entrance, and “Wisdom” (pictured), above the main entrance of 30 Rockefeller Plaza.

Nestled in the heart of Mexico City, the Palacio de Bellas Artes’ interior is designed in Art Deco style — with luxuriously coloured marble and sharp lines with a streamlined look. The exterior is primarily in the Neoclassical and Art Nouveau styles. This national landmark houses murals by artists such as Diego Rivera, José Clemente Orozco, and David Siqueiros. It depicts the rich cultural history of Mexico and is marked by its distinctive tympanum in the central part.

This bright yellow and green building in Mumbai is known as the “eyebrow queen” of the city, owing to its rounded shades jutting over the windows. Built between 1934 and 1935, it is also characterised by its Egyptian-inspired inverted sunbursts, sweeping curves, layered chevrons, and frozen fountain motif (a symbol for eternal life), made famous by French designer René Lalique.

7 - 9
Basilica of the Sacred Heart, Belgium

Basilica of the Sacred Heart, Belgium

This church in Brussels was built to commemorate the 75th anniversary of Belgian independence. Construction began in 1905 but it was halted due to the outbreak of the two World Wars. Its most striking feature is the big, green dome, set in contrast with the church’s red terracotta walls. One can enjoy breath-taking panoramic views of the city from the basilica’s observation deck.

Located in Shanghai, this hotel (lit in green in the picture above) overlooking the Bund is a luxurious Art Deco masterpiece. It was originally known as the Cathay Hotel in 1926, built by British businessman, Sir Victor Sassoon; and was later refurbished. The building boasts of a Renaissance-style exterior and is divided into the south and north buildings. It is also known for its grand copper-sheathed roof, high-ceilinged corridors, and Art Deco details like a geometric façade with sharp, linear lines.

This skyscraper in Buenos Aires was conceptualised by local architects in 1934. It was designed in Modernism and Art Deco style, with a rationalist approach (where preference is given to simplicity instead of decorations) — replete with straight, slender lines and no external ornamentation in order to avoid any extra weight. 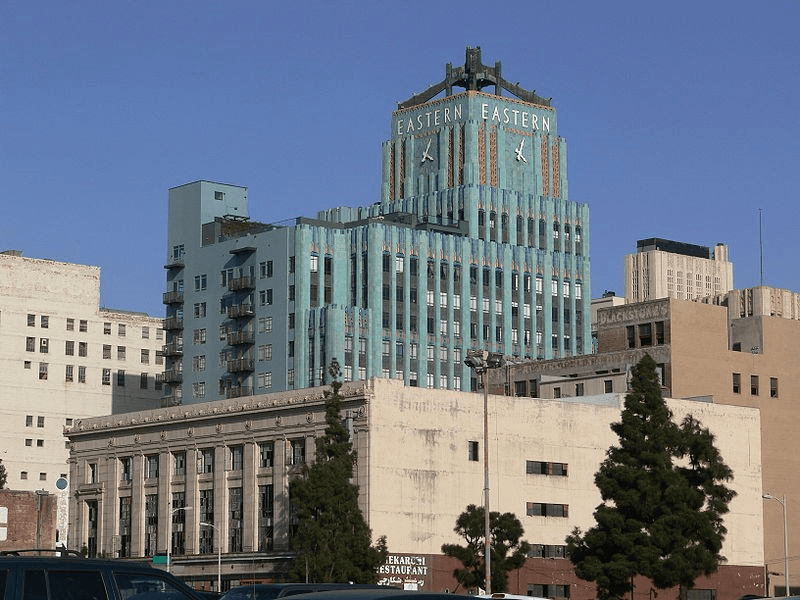 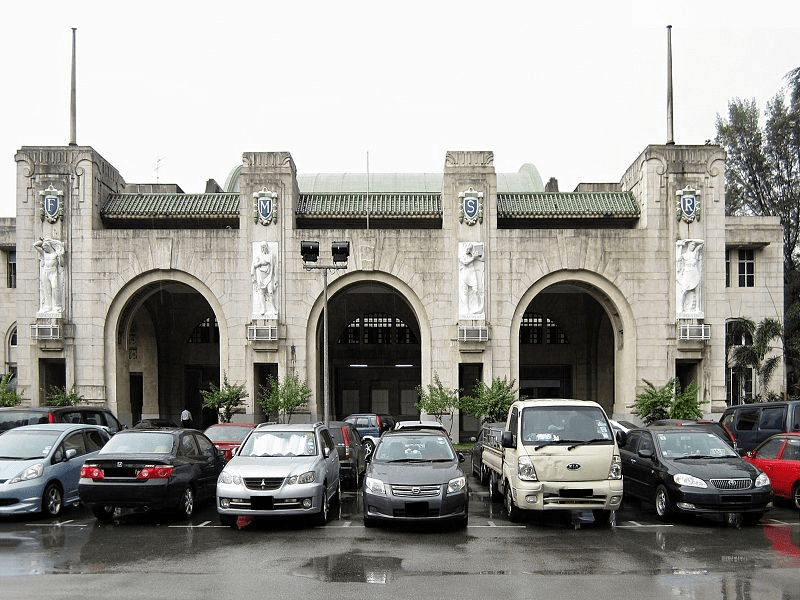 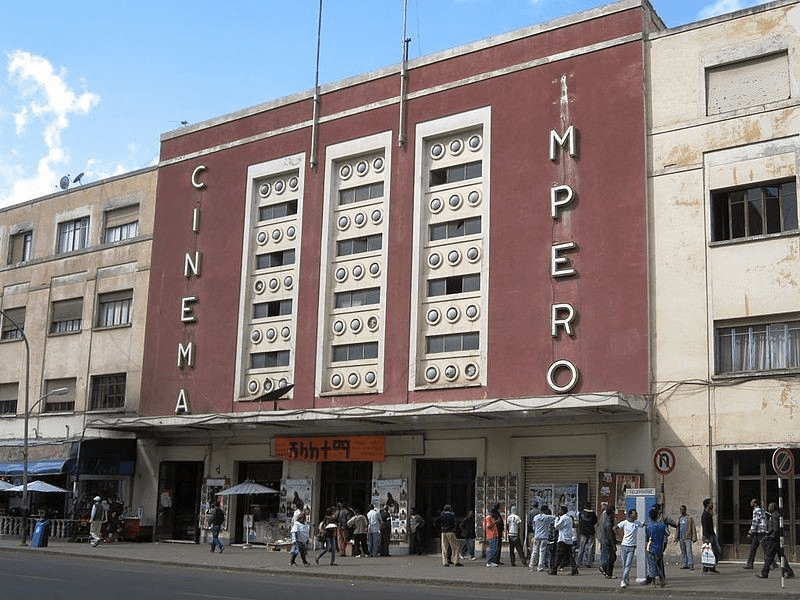 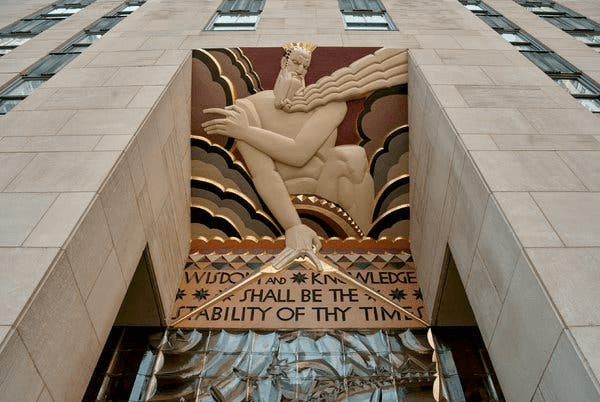 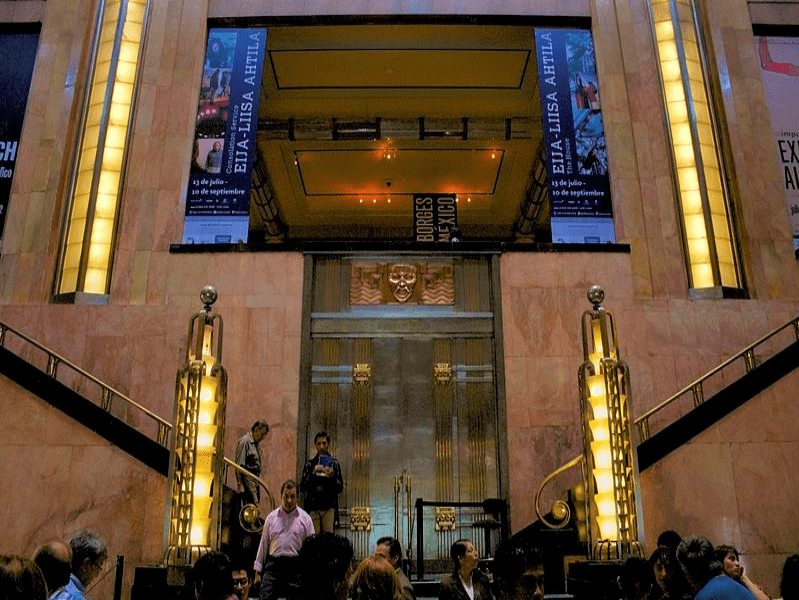 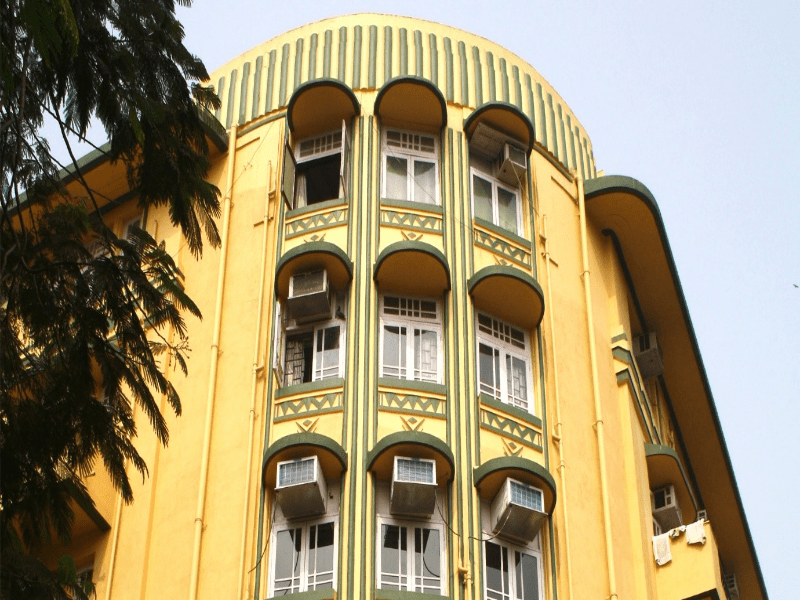 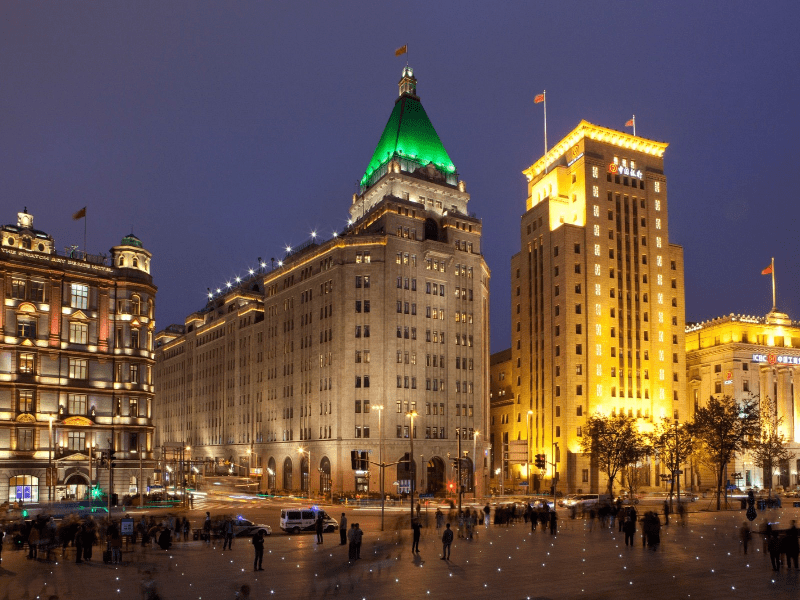 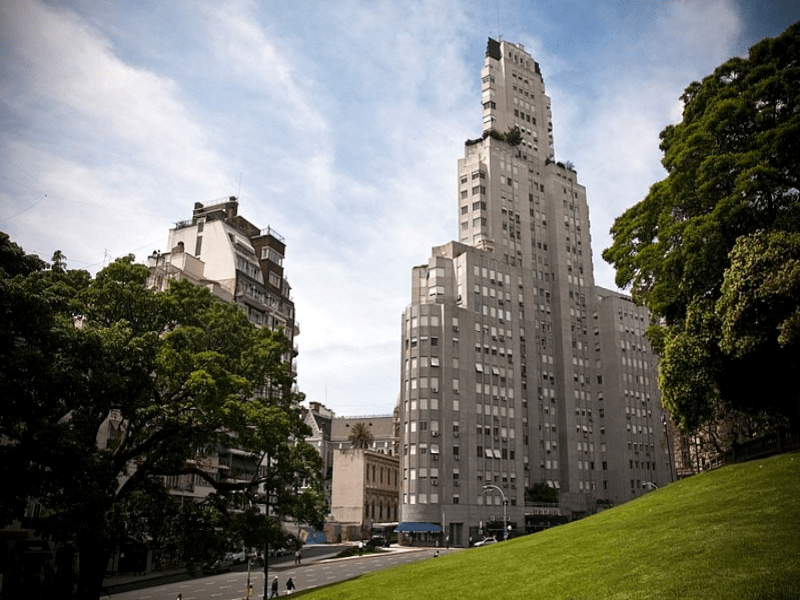 Of all the architectural styles, Art Deco — or Arts Décoratifs — is perhaps the most recognisable.

Known to illustrate luxury, old-school glamour and sophistication, with vibrant hues and bold geometric patterns, Art Deco was developed in France while the country was recovering from the aftermath of World War I. Years of austerity during the war gave way to a period of extravagance after it ended, giving birth to this opulent style.

The style was first exhibited at the International Exhibition of Modern Decorative and Industrial Arts (“Exposition Internationale des Arts Décoratifs et Industriels Modernes”) held in Paris in 1925. On display were works of over 15,000 designers, artists, and architects such as Émile-Jacques Ruhlmann, Jean Dunand, and Pierre Chareau. The artworks showcased the bold use of colours and straight, clean lines. The exhibition was toured by 16 million people over a span of seven months.

The movement soon reached the US, and icons of Art Deco architecture like the Rockefeller Center were built. In the 1930s, it also saw a boom in Miami’s South Beach. After experiencing a decline during World War II, the style slowly revived in the 1960s and 1970s, especially in the US, owing to illustrations in books and magazines. Today, Art Deco finds a place in buildings, contemporary fashion, jewellery, and art.

Let us look at some of the most stunning Art Deco buildings around the world — some incorporated with Egyptian influences, as well as elements of cubism and futurism.

The Most Showstopping Trunks At The Louis Vuitton 200 Trunks, 200 Visionaries Exhibition