Reversing the sands of time with Timberland - Augustman
Sort & Filter
Close Filter
Sort By
Date
Relevance
Filter By Category
All Categories
All
Style
Culture
Gear
Food & Drink
Travel
Wellness
AM Select
Apply
Filter By Location
malaysia
All Countries
Culture
10 Important Artworks That Paint A Vivid Picture Of The Malaysian Identity
Culture
Someone You Loved: Up Close with Lewis Capaldi
Culture
How ‘Parasite’ is breaking language barriers for foreign films in the US
Culture

Reversing the sands of time with Timberland David Beckham unveils his new DB shades collection
StyleRead More
10 Important Artworks That Paint A Vivid Picture Of The Malaysian Identity
CultureRead More
Someone You Loved: Up Close with Lewis Capaldi
CultureRead More
How ‘Parasite’ is breaking language barriers for foreign films in the US
CultureRead More
Here's your ticket to incisive commentary and insights from the celebrity sphere. Sign up for our newsletter.

Enchanted by the mystery of the desert and the prospect of adventure, and perhaps having listened to Oleta Adams’ Get Here a tad much, we spontaneously said “yes” to an invitation from Timberland to participate in its global reforestation project in the Horqin Desert, China, in celebration of Earth Day and in line with the brand’s latest campaign “Nature Needs Heroes”. 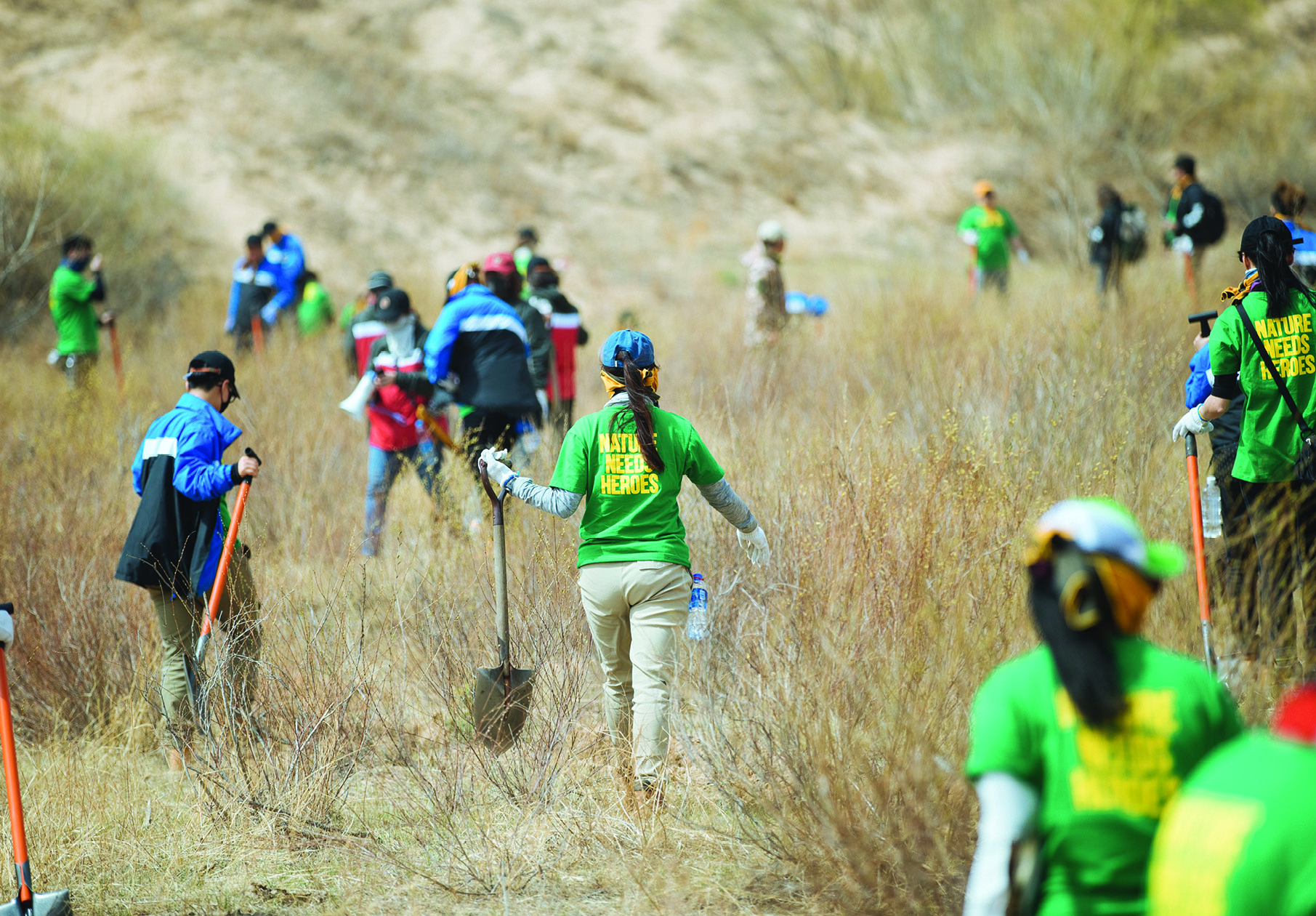 What we discovered, however, wasn’t quite as romantic and picturesque as what we had in mind. Instead we experienced first-hand a desperate reality resulted from human activity and a taste of the formidable forces of nature. Despite the grim situation and harsh conditions, we were inspired with hope by the long-term environmental stewardship undertaken by Timberland and its collaborators that have made them true heroes of nature and the leading role they play in bringing the community together and restoring Horqin to its former glory. 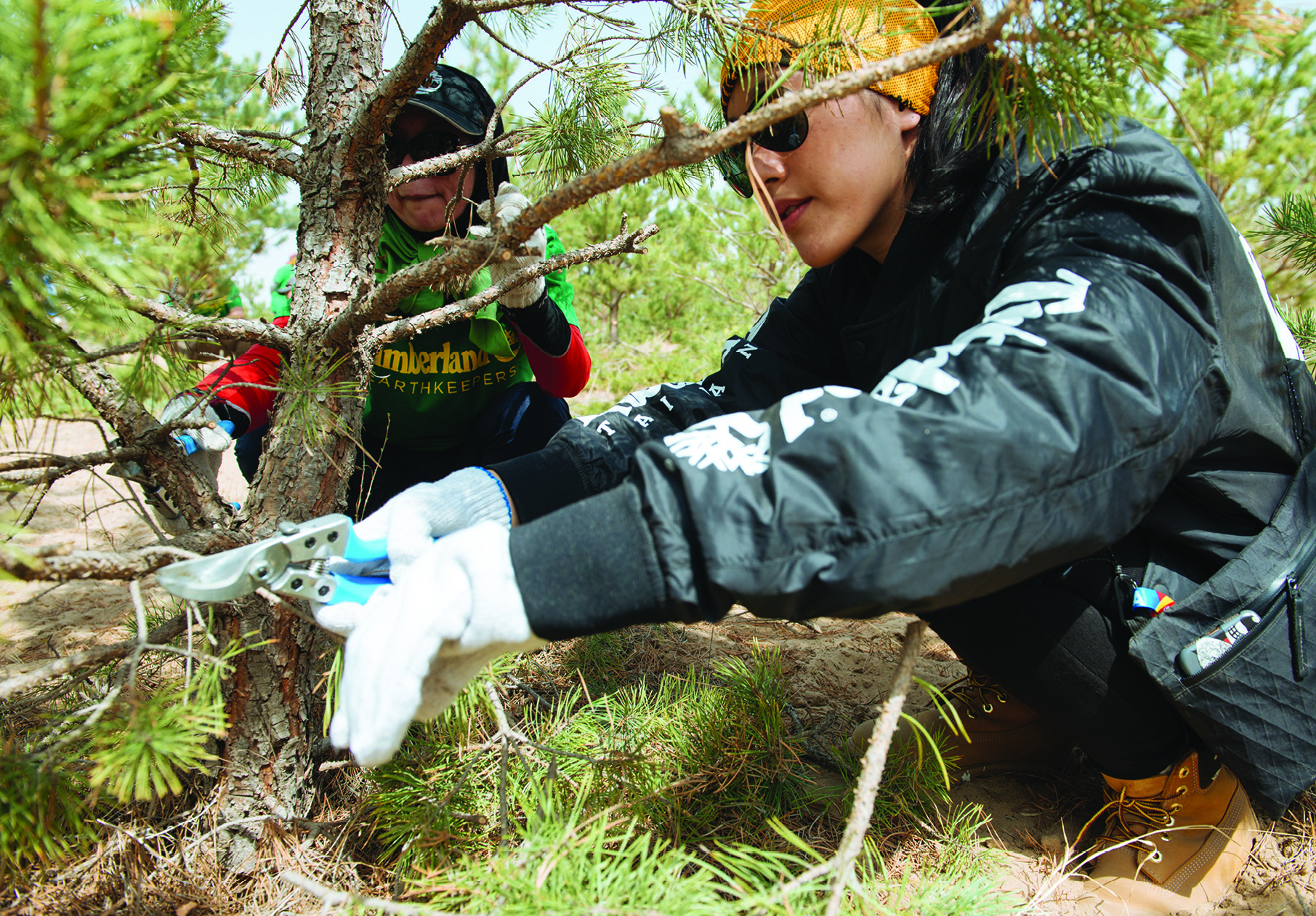 Located in the eastern part of the Inner Mongolia Autonomous Region, North China, the Horqin Desert encompasses the prefectural municipality of Tongliao and the surrounding areas. To get there, we travelled first to Beijing, followed by another short flight to Shenyang in the neighboring province of Liaoning. From here, the journey continued north by coach for several more hours to a provincial town of Horqin, where we lodged for the duration of our visit. 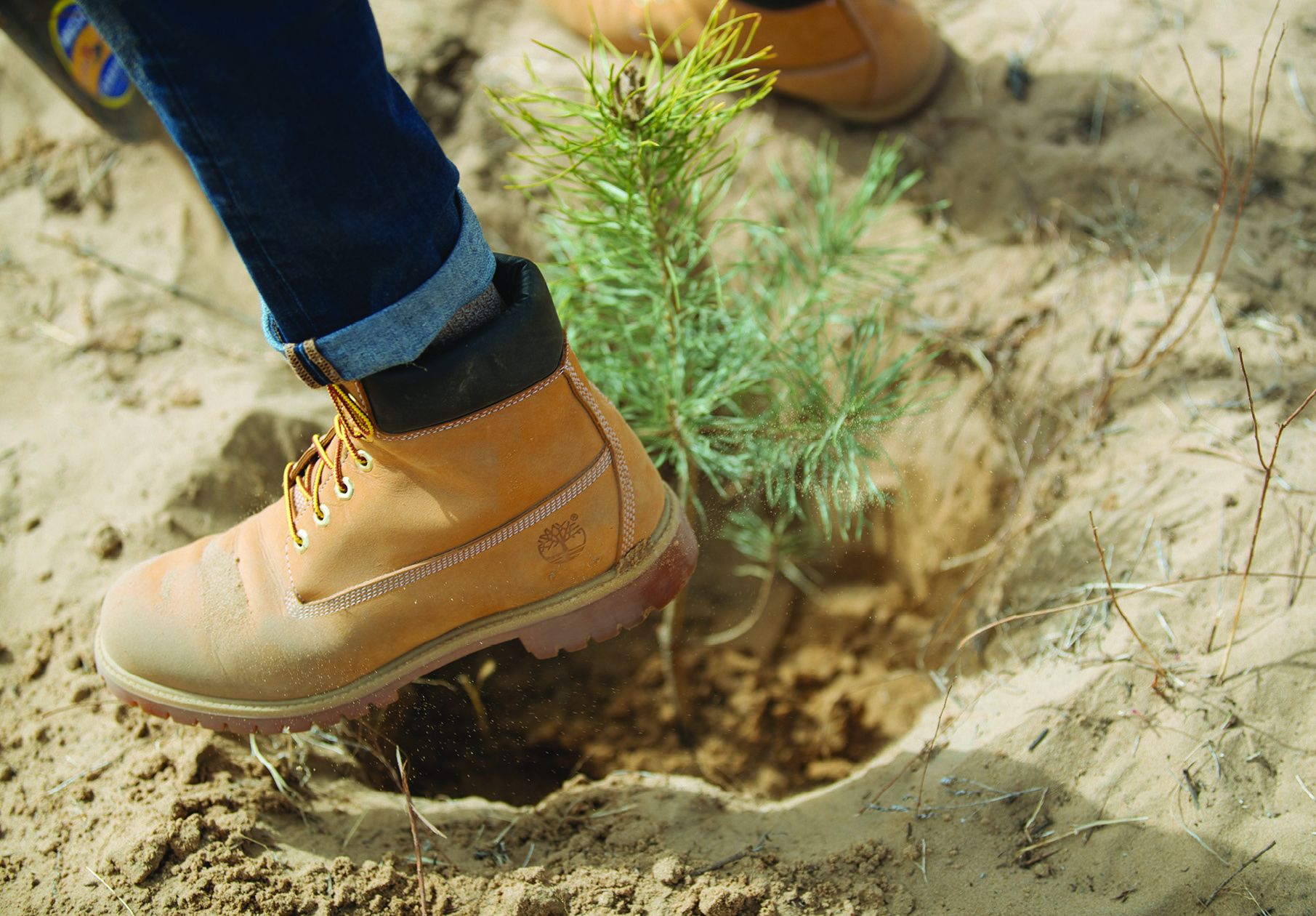 Over the next two days, as we ventured into the Horqin Desert, flanked by dreary views of dry, sandy landscapes interspersed with random light industrial structures and what looked like abandoned farmhouses along the way, we learned from Timberland that the Horqin Desert is not as much a natural occurrence as it is a land degradation, and discovered in person the detrimental effects of desertification brought on by human activity. Horqin was, in fact, once a vast verdant grassland in Inner Mongolia. Sadly, it has undergone long years of grazing and reclamation to an extent over its capacity. As a result, the desertification area has expanded to over 420,000sqkm in size at a rate of 10,000sqkm per year. The desertification-incurred sandstorm has come with adverse impact on such Asian regions as northeast part of China, all the way to the neighbouring Japan and South Korea. 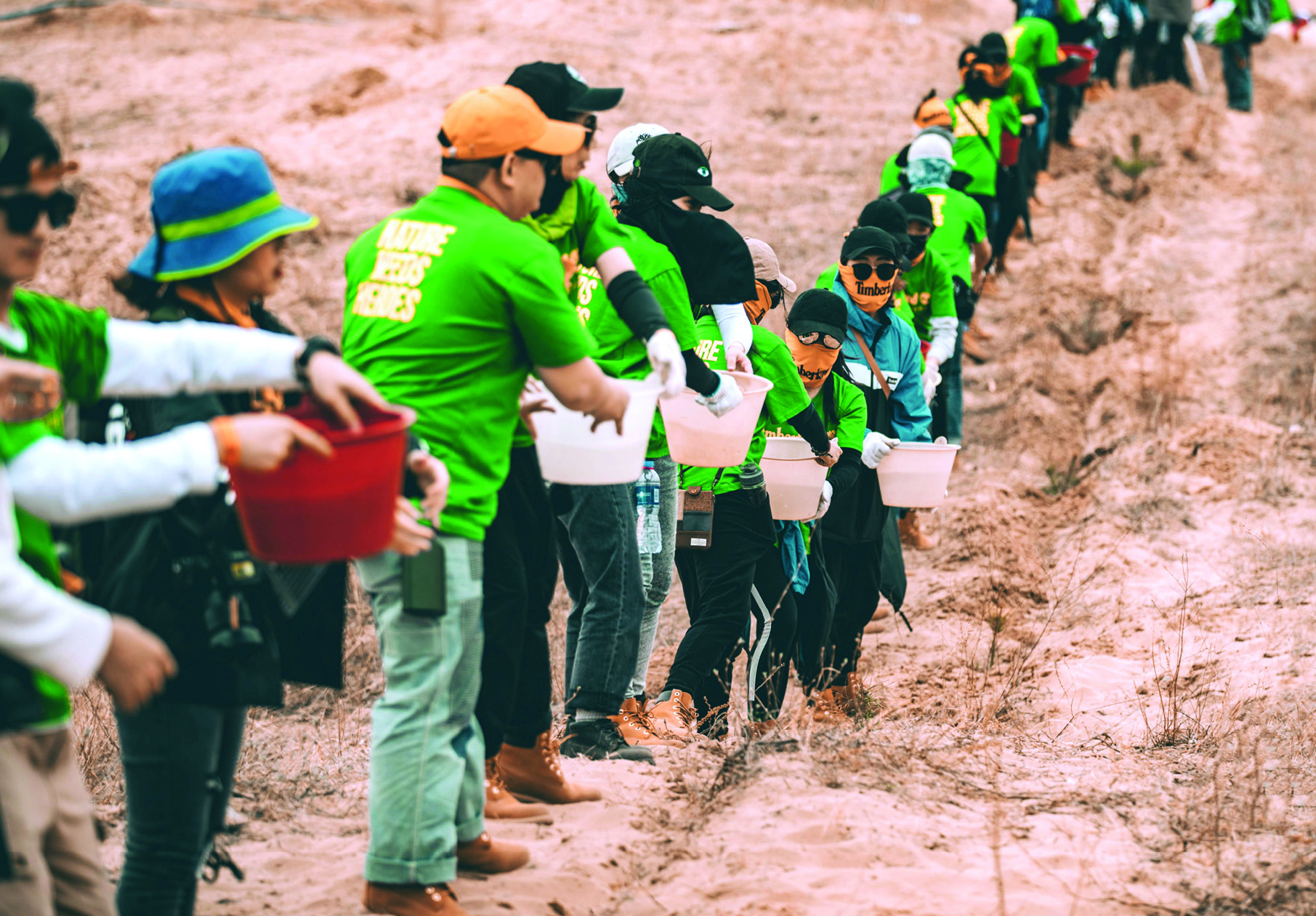 Being committed as a contributor to the sustainable development of the environment, Timberland has joined hands with Green Network, a Japanese non-profit organisation, since 2001 for tree planting events in Inner Mongolia in order to prevent and improve the desertification in the Horqin Desert. Years of concerted efforts have finally paid off as evidenced by the reduction in soil loss and mitigation in the frequency and severity of sandstorms thanks to the newly planted vegetation. More importantly, the reforestation initiative has the potential to improve the local ecological environment and promote the production of agricultural works with positive impact on the local economy. By the year of 2018, 120 million Yuan has been invested into the plantation of more than 2.6 million trees in China, greening an area up to 846 hectares, enough to fill 1,450 football fields. The accumulative servicing time for the project is 347 days. Up until today, Timberland has planted as many as 9.7 million trees worldwide. This year, for its 19th consecutive year, Timberland, along with over 130 volunteers made up of members of the media from China, Hong Kong, Taiwan, South Korea, Singapore and Malaysia, including us, led by Takashi Otaki, co-founder and executive director of Green Network, and Atlanta McIIwraith, senior manager, Timberland Community Engagement and Communication, successfully planted a total of 650 pine trees to form barriers around the affected area in the Horqin Desert to limit the spread of decay. 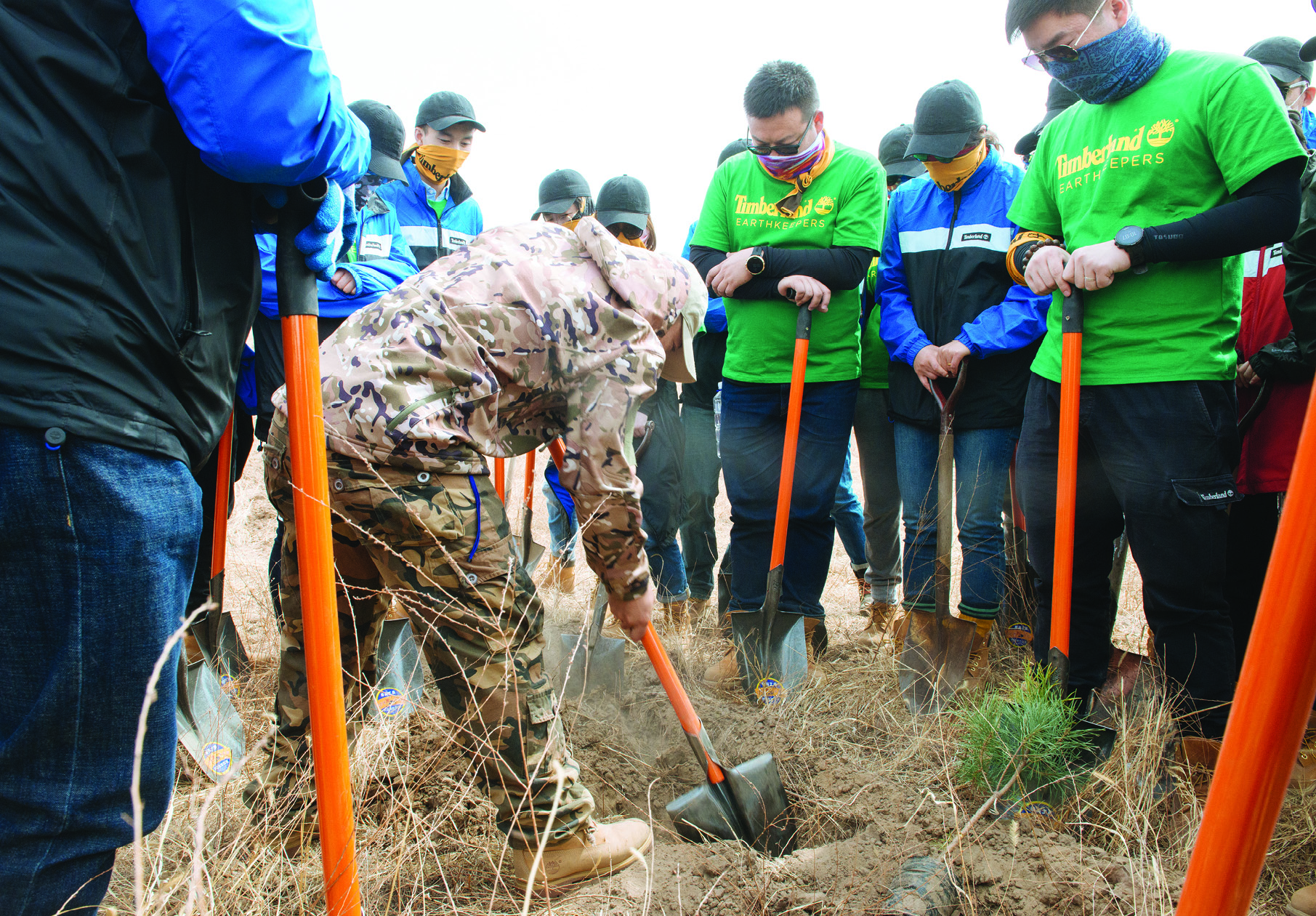 For each tree, we had to dig 30cm deep into the sand to plant the sapling and later form a human chain to water it, armed with a pair of gloves, a shovel and a bucket, using water collected from a well. Despite the labour and being all geared up in long-sleeve shirt, face mask, cap and sunglasses, not to mention Timberland’s iconic Original Yellow Boots, what took a toll on us was the dry, sandy atmospheric conditions – sands were everywhere, in our mouth, our hair, our eyes, and the very air we breathed. Nevertheless, the group soldiered on in high spirits. In addition, we pruned 5,400sqm of pine and 10,880sqm of poplar respectively so as to promote the growth of grasslands. 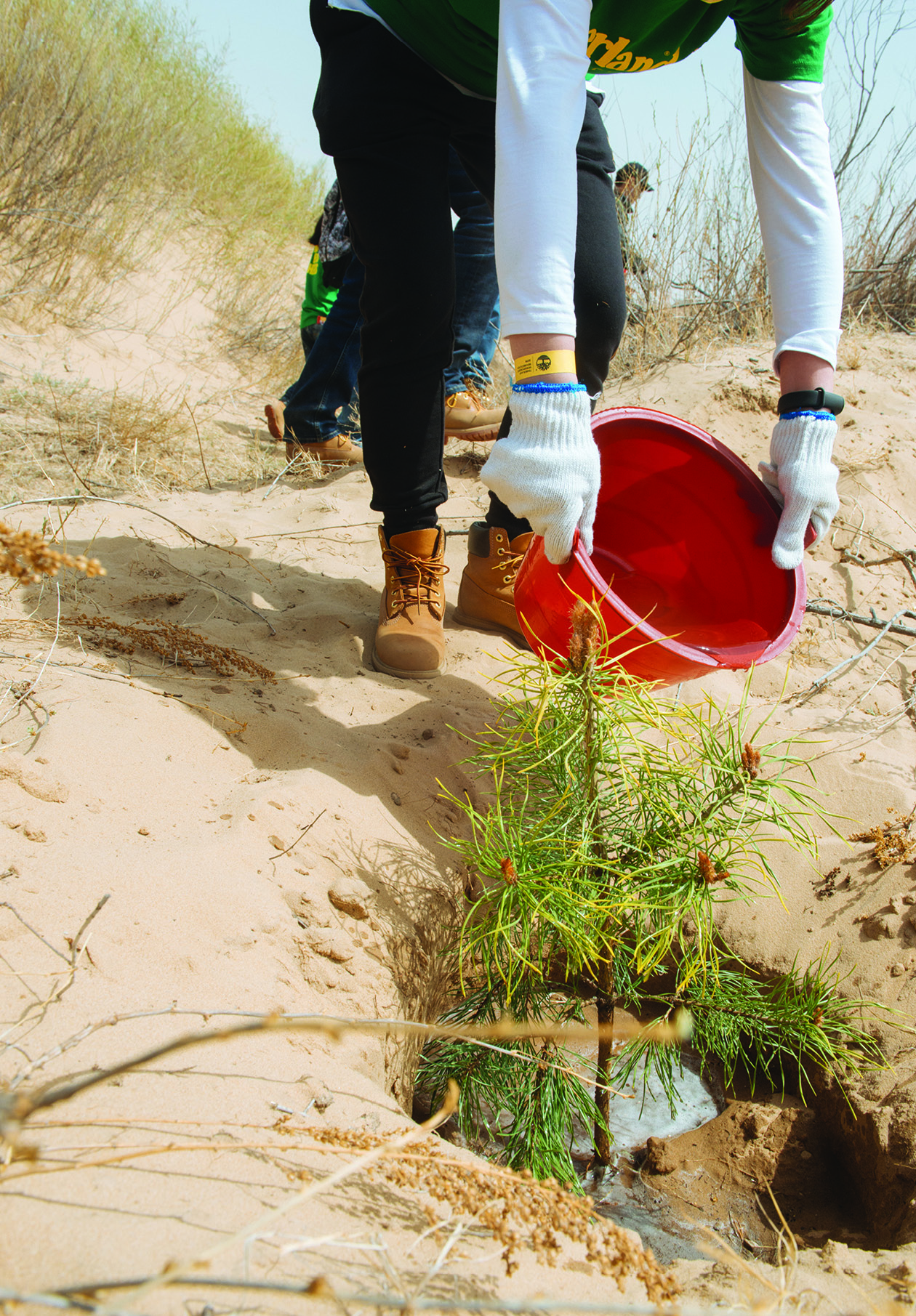 Throughout the operation, we were joined by Timberland’s Asia Pacific ambassador, actor, singer and entrepreneur Will Pan, who had earlier pledged to lend his support to the brand’s “Nature Needs Heroes” campaign and got his hands dirty with us, in true Timberland style. According to Pan, who has long been committed to community outreach and environmental sustainability, the experience from the Horqin Desert has truly reinforced his consideration for the environment and strengthened his resolve to push forward the sustainability cause while encouraging his supporters in person.

In anticipation of the 20th anniversary of its reforestation project in the Horqin Desert in 2020, Timberland, with its Earth Day service events and community greening projects worldwide, and eco-conscious products, strongly encourages people to be a role-player in environmental protection and to step outside, work together to create better products, stronger communities, greener cities, and a better life for the world.

Conservation
nature
timberland
KC Yap
Talk to Me About:
timberland

5 scary folklores in Malaysia that will give you the chills
Dhakshaan Kumar
Culture
Laughing with Jahow See of Parody Parlour
Celeste Goh
Culture
Interview: ‘The Garden of Evening Mists’ actress Lee Sinje on embracing the lead role
Rubin Khoo
Culture
The Ghost Bride: What the Directors have to say about the first locally produced Chinese Netflix series
Celeste Goh
Culture