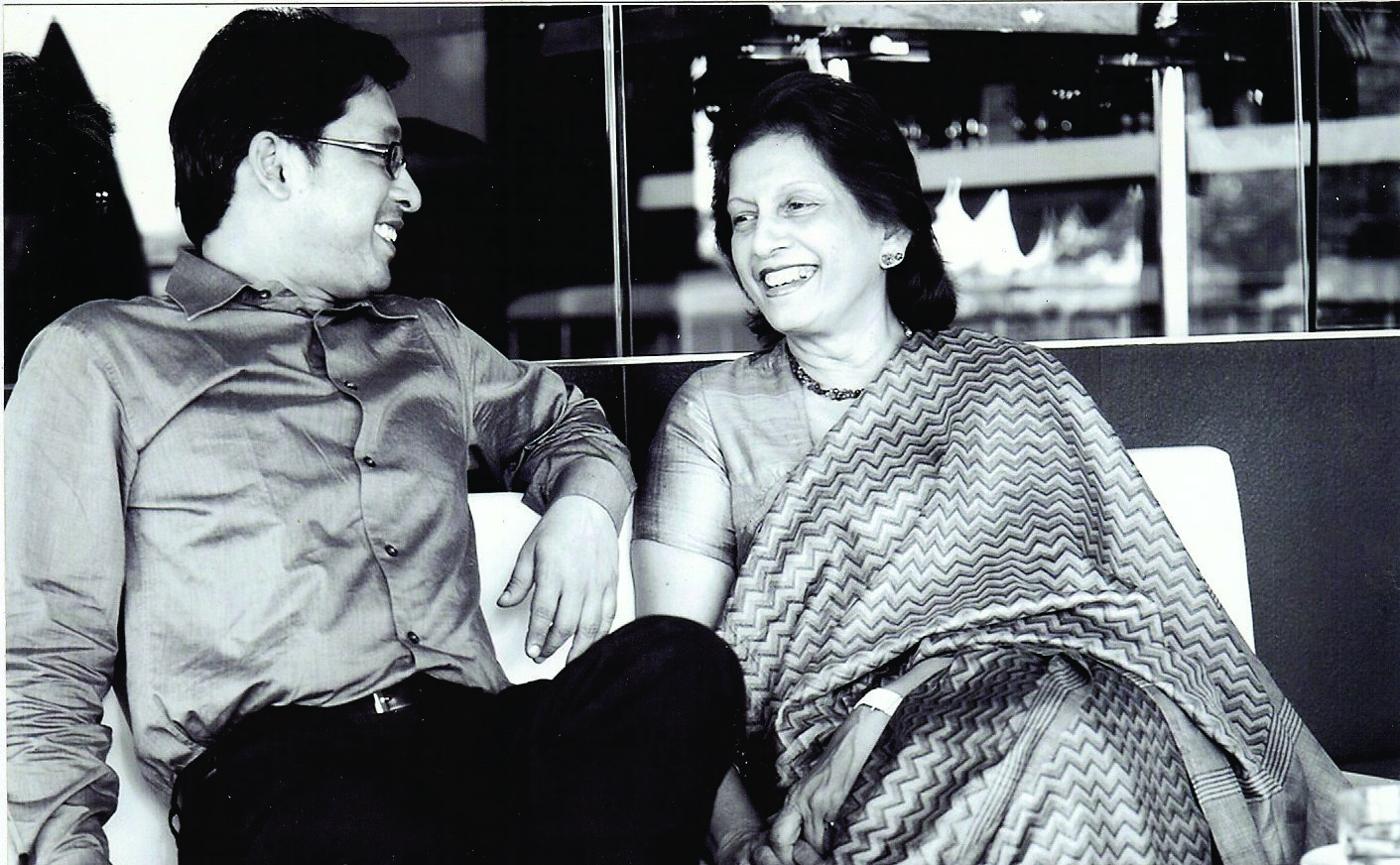 Meet Puan Sri Rathi Khoo and Eddin Khoo, a mother-son duo that truly celebrate and cherish Malaysia, who share with us their personal takes on Merdeka. While we might expect significantly less pomp and parade, we could certainly do with a lot more of the Merdeka spirit.

If anything, our multiple lockdowns have laid bare the social pressures and inequality faced by the varying stratas of our society. Honouring our national birthday is a great way to remember how far we’ve come collectively, and an awesome reason to celebrate our humanity. As long as we’re jogging on the great wheel, we’re going to need each other. So we reached out across the generational divide, asking a veteran and scion what Merdeka means to each generation. Here’s what we heard back from Puan Sri Rathi Khoo, a teacher who is also wife of the late historian, Emeritus Professor Tan Sri Datuk Dr. Khoo Kay Kim along with her son, Eddin Khoo who is the founder of cultural centre, PUSAKA and publishing house, Kala.

What has changed most about Malaysia compared to when you were younger?
I cannot believe how much has changed in the last few decades in our country. Both my late husband and I grew up in a completely different era. There didn’t seem to be racial or religious divisions; our parents were government employees and throughout our childhood we lived in Government quarters. It gave us a wonderful opportunity to grow up in a multi racial environment. I have fond memories of how we used to buka puasa with Datuk Yusoff’s family. Everyone came from moderate backgrounds but we shared everything and there was a lot of kindness and affection. I went to a Catholic convent school and learnt to read the bible and some beautiful Catholic prayers and hymns. Despite that I have remained a staunch Hindu. Today, everything is seen in terms of race and religion. It is sad.

What is a local culture you’d like to see the younger generation pay more attention to?
Our children should be exposed to all cultures. When we were young we would have troupes come and perform in the little towns. The audience was made up of all races. Everyone would bring a little mat, lay it on the ground and watch what was on stage with great enthusiasm. During the month of the Hungry Ghosts we would be treated with Chinese Operas. I remember my brothers and I would re-enact the opera performers much to the amusement of our parents.

Then during Hindu festivals, we would again be entertained with Indian dance and music. A number of my Malay classmates could sing beautiful Tamil and Hindi songs and they would show off their ability during our school concerts. As children we were very intrigued by the Wayang Kulit, we didn’t understand how the shadows appeared on the screens and we would all scramble to the back to watch the performers. My mother would always explain the story of Rama and Sita as told in the Wayang Kulit. All efforts must be made to preserve all the cultures – no where else in the world, I believe, can you find all these cultures coming together.

We are lucky to be in a country so rich in culture. When our children were born we encouraged them to appreciate all cultures. I remember when Eddin was in primary school, he was accidentally sent to the ugama classes. He looked Malay and had a name that sounded Malay. Weeks later Tan Sri and I noticed that he was reciting verses from the Koran.

Interests in different cultures still run in the family. Eddin is very involved in preserving Malay culture and Mavin Khoo is a world-renowned Indian classical dancer. He was completely encouraged by Tan Sri who always taught the children that there should be no racial prejudices. I also remember Rubin Khoo going to get his MyKad. The girl at the counter giggled and told her friend next to her “Muka macam Melayu, nama Cina, agama Hindu” which translates to “He has the face of a Malay, a Chinese name but is Hindu”. I think they are perfect Malaysians. I remember Datuk Kadir Jasin coming to pay his respects to Tan Sri and his message was “A good journey, Tan Sri — a man without race”

What is a unique quality that you’ve picked up from the generation before?
Nothing unusual. Just the nice traits that we Malaysians are known for—to say a Please, a Thank You, respect to elders, giving up a seat to an older person and never speaking rudely to anyone. These traits are very special to all Malaysians. These are also traits I taught my students in La Salle PJ. A lot of my students have now grown up to become perfect gentlemen. We must make sure that we preserve these traits that make us Malaysians.

What event made you feel proud to be a Malaysian?
On Merdeka Day 1957, I remember sitting on the carrier of my father’s bicycle and going with him to the field in the little town of Teluk Intan. We sat on the ground and Tunku Abdul Rahman’s speech was telecast on the huge screen. And at 12 midnight the whole crowd of people, including my father and brothers were shouting ‘Merdeka’ together with the image of Tunku. I didn’t quite understand what was going on and
my father and brothers had to explain to me the meaning of Merdeka and Independence. I knew that at that time I felt very proud of being a Malaysian.

Then in 1971, the whole family gathered together to watch the All England Badminton Tournament. Gunalan partnered with Ng Boon Bee (who was a school mate of my husband in St Michael’s, Ipoh). There was great excitement when they captured the title and became the leading men’s double team in the world. It was a proud moment for all of us.

Much later in life, during the 14th Malaysian general election 2018, I was really proud when there was a change in Government, mainly because it showed that Malaysians had matured and were able to express themselves in the right way.

What is an important lesson you’ve learnt throughout the years about Merdeka that you wish the younger generation would always remember?
Merdeka means Independence and with Independence there should be responsibilities too. The leaders of the country should behave in a responsible manner and instil a sense of loyalty and love for the country. When you become a leader you have to have the peoples’ welfare at heart or there will be dissatisfaction on the ground. Creating this sense of responsibility starts with education. As a teacher, I believe education goes beyond just exams but also creates a generation of leaders. My education was at a mission school and later I taught at two mission schools—Bukit Bintang Girls School (BBGS) in Kuala Lumpur and La Salle Secondary School in Petaling Jaya. The principals at these schools insisted that good values should be inculcated in our classrooms and to teach our children to grow up to be good citizens. I think I did just that and my students have grown up and taken their place in society as individuals we are proud of.

Where do you see Malaysia in the next 10 years?
I fear for the future of our country. My husband was a dreamer and he always believed that things would become better. He always said that there would be a rainbow after a shower of rain – but I fear that it will not happen. I am getting old and for the first time I feel frightened for the country. We are lucky in Malaysia; we have never had any natural disasters and God has been kind to us. We should work towards bringing our country back to its heyday when we were known to the world for all positive reasons.

What has changed most about Malaysia compared to when you were younger?
I would surely say space, and freedom: the city seems now so closed in. Kuala Lumpur when I was growing up in the 1970’s and 1980’s had so much more open space. It was also a less intrusive city and it was possible then to make long explorations in your neighbourhood and also into the city. I enjoyed being a loner, and would often do things on my own. There was a great freedom for that then: even the existential nature of Malaysia is no longer the same.

With modernisation, you see Malaysian cultures like Chinese Opera, Mak Yong, Wayang Kulit etc on the verge of dying. What is a local culture you’d like to see the younger generation pay more attention to?
This is actually a misconception: these cultures are not dying. No doubt they suffer from the ebbs and tides of anything popular but these traditions actually have an enduring power beyond anything we can see in the commercial world. Of the various ritual-traditional groups our organisation PUSAKA works with, close to 80% of practitioners are under the age of 30. So when we say ‘young’– who do we mean by ‘young?’ Only the middle class, metropolitan young? There are many among the ‘young’ who are returning to practicing these art forms in search of roots and cultural strength. Having said that, the younger generation can pay attention to ALL these traditions mentioned, and more. Better still ‘pay attention’ by actually going in search of these traditions, travel, make your country a lived experience…

What is a Malaysian trait your mum or dad has passed down to you?
Everything in this country and culture was formed by liberty and openness. On a more personal note – the art of eating: this was not passed down to me by my parents so much (who were rather modest eaters) but my uncles; large, hearty men — who passed down to me the trait of believing a meal is only a meal if it has meat and curry in it.

Can you recall a time that made you feel proud to be a Malaysian?
Simple: every time I step into a town or kampong to be with our PUSAKA communities and am received, from the first instance, as family. Race and religion matter? Only on our identity cards, not in the hearts of our communities.

What is an important lesson you’ve learnt throughout the years about Merdeka that you wish the younger generation would always remember?
That history is intimate, always with us, and difficult. And it is our duty to begin and sustain that dig of the past that makes all of us, individually— have a story, and matter.

Where do you see Malaysia in the next 10 years?
I don’t know: I would like to see all the vibrancy, wildness and resourcefulness of Malaysia’s people and culture serve to inspire a world- angry and confused at how vast it actually is- with our own, and our region’s, cultural complexity. What I hope I will not see, narrower and narrower identity politics, baa baa black sheep politicians, and a culture gripped by a puritanism that is not true to its cultural essence and historical reality.

Importance Of International Men’s Day And The Theme For 2021

The Origins Of Diwali: Uncovering The Festival of Lights And Its Remarkable Celebrations

Get Your DIY Mode On: Halloween Costumes You Can Make At Home

How K-Pop Stars Like BTS And Dreamcatcher Celebrate Halloween