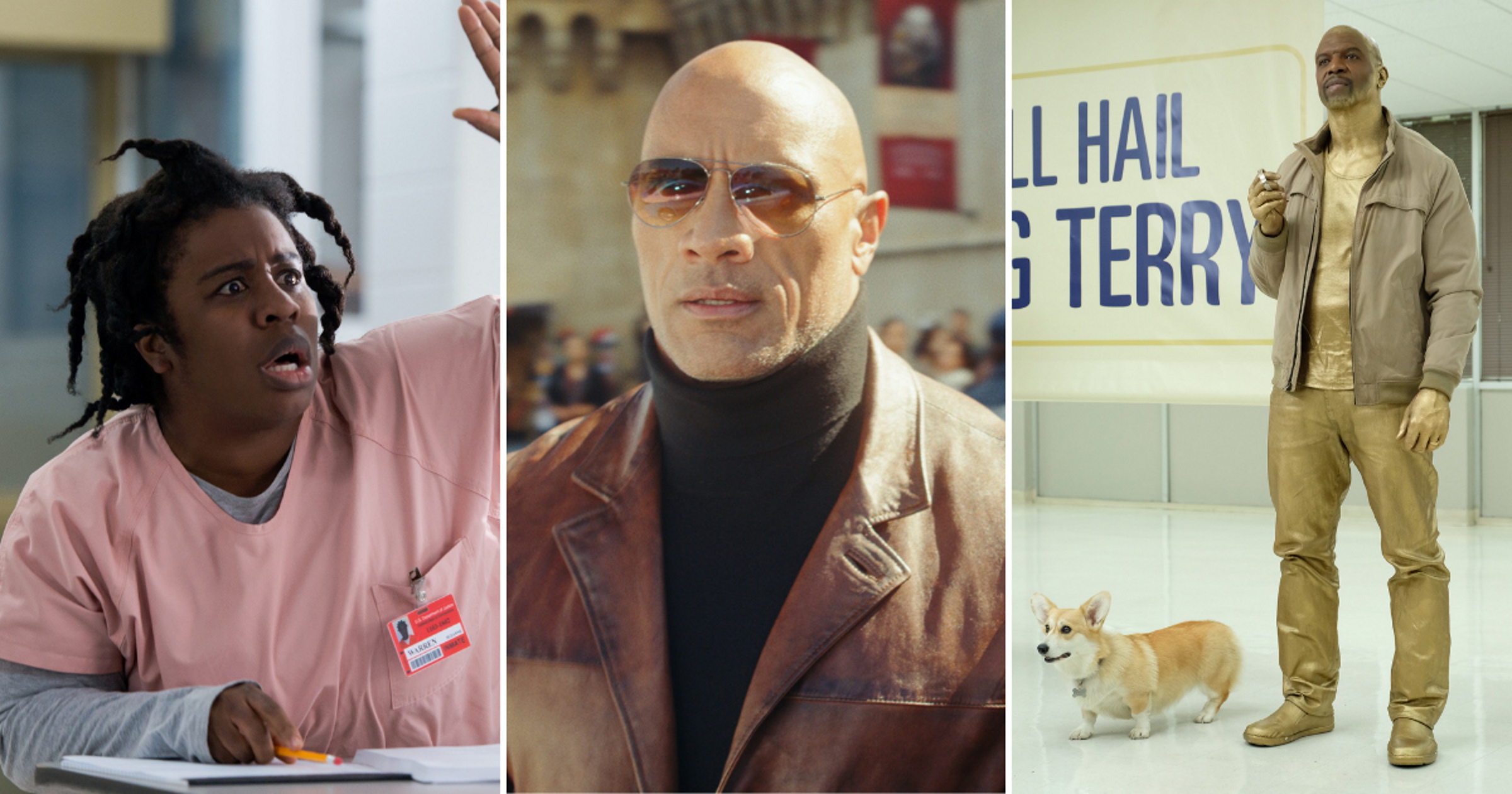 7 Former Athletes Who Became Actors And Never Looked Back

From sports to film, here are seven former athletes who became actors.

Having already had to deal with eyes on their every move on the pitch (or in the stadium), it almost feels natural for some athletes to put on convincing – and even award-winning – performances when dipping their toes into the entertainment industry.

While some actors’ athletic histories are known to many (think Dwayne Johnson and John Cena’s pro-wrestling careers), you’d be surprised by how many of them actually started their professional careers on the pitch and in other arenas. Here are some prominent athletes who became actors with great success.

Do you smelllll what The Rock is cookin’?! We were all introduced to Dwayne “The Rock” Johnson as the WWE superstar whose right eyebrow had a life of its own, but did you know that he briefly pursued a career in professional American football? A young Johnson played for the Miami Hurricanes in college and won a national championship as part of the 1991 line-up.

His dream, however, was cut short when he was let go from the Canadian Football League’s Calgary Stampeders in his first season. Following in his father and grandfather’s footsteps, he decided to pursue a career in professional wrestling instead and signed on to the WWE in 1996.

Johnson made his acting debut in 1999 playing his father Rocky Johnson in That ‘70s Show before making his theatrical debut in 2001’s The Mummy Returns. He has since starred in countless movies and even co-founded production company Seven Bucks Productions in 2012, which has churned out films like Baywatch, Jumanji: Welcome to the Jungle, Fast & Furious Presents: Hobbs & Shaw, and the recent heist comedy Red Notice starring Johnson himself alongside Ryan Reynolds and Gal Gadot. He will next be seen in the comic book adaptation of Black Adam.

To wrestling fans, he will always be ‘Batista’ a.k.a. The Animal.  Known for his hulking muscular frame, Bautista began his professional wrestling career in 1999 and signed with the WWE the next year. He quickly rose to fame under the aforementioned ring name and would go on to become a six-time world champion, winning the World Heavyweight Championship four times and the WWE Championship twice.

Bautista’s early filmography consisted of guest appearances and cameos as himself in TV shows like Smallville and Chuck. In 2014, he played Drax the Destroyer in Guardians of the Galaxy, paving the way for more appearances in the Marvel Cinematic Universe as well as starring roles in major blockbusters such as Spectre, Blade Runner 2049, Zack Snyder’s Army of the Dead, and most recently, Dune.

Despite making his first ever on-screen appearance at the tender age of seven in Spike Lee’s Malcolm X, which starred his father Denzel Washington in the titular role, John David Washington did not immediately follow in the latter’s footsteps when it came to pursuing an acting career.

Having excelled in football, basketball, and track in high school, Washington continued playing football at Morehouse College and signed with the St. Louis Rams as an undrafted free agent in 2006. For four years, he served as the running back for the United Football League’s Sacramento Mountain Lions until the league ceased operations in October 2012.

Washington scored his first major role when he was cast in HBO drama series Ballers, which he starred in until 2019. He was also cast in lead roles for Spike Lee’s BlacKkKlansman and Christopher Nolan’s Tenet and played the titular characters in Malcolm & Marie and Beckett.

Crazy Eyes has crazy fast feet!  As a child, the Emmy award winning actress dabbled in competitive figure skating. The Orange Is the New Black star also won a track scholarship to Boston University where she became one of its top sprinters and even holds the record for sprinting there.

Fast forward to the present day, Aduba continues to flex her endurance muscles amid acting projects, having participated in the Boston Marathon and the New York City Marathon.

If you can’t see him then, you sure can see him now! When discussing former athletes who became actors, you can’t leave out the name John Cena. Before his days of spouting witty one-liners and flexing his muscles on the big screen, Cena was spitting rhymes and winning championship belts in the WWE. He is widely regarded as one of the greatest professional wrestlers of all time, tying with former pro wrestler Ric Flair for the most world championship reigns in professional wrestling history.

Cena’s acting career began with starring roles in The Marine, 12 Rounds, and Legendary — all three of which were produced by WWE Studios, the motion pictures arm of the WWE. Since then, he has brought his charismatic presence to comedies such as Trainwreck and Blockers, as well as high-profile blockbusters like Bumblebee and The Suicide Squad. He will also reprise his role as Peacemaker in the upcoming HBO Max series.

In the days before Jason Statham stopped growing out his hair, the action superstar was part of Britain’s national diving team, which he was a member of for 12 years and even competed in the 1990 Commonwealth Games. He was also an avid footballer and practiced Chinese martial arts, kickboxing, and karate in his youth.

After making his film debut in Guy Ritchie’s Lock, Stock and Two Smoking Barrels in 1998, Statham broke into Hollywood at the turn of the millennium with notable action movies such as Snatch and The Transporter. In the years that followed, he carved a niche for himself playing stoic, tough characters in films like Mechanic: Resurrection and even teamed up with some of the world’s most iconic action stars in the Expendables films and the Fast and Furious franchise.

That’s not to say he doesn’t have range; he did, after all, flex his comedic chops as a debonair yet incompetent spy in Spy alongside Melissa McCarthy, Jude Law, and Rose Byrne.

Way before ‘A Thousand Miles’ was anyone’s jam, Terry Crews played football in college and even went on to pursue a professional football career. His time in the NFL included stints with the Los Angeles Rams, the Green Bay Packers, the San Diego Chargers, the then-Washington Redskins, and the Philadelphia Eagles before he retired in 1997 and moved to Los Angeles to pursue acting.

Nowadays, he is mostly known for his memorable rendition of ‘A Thousand Miles’ in White Chicks, Old Spice commercials, and as yoghurt-loving Sergeant Terry Jeffords in Brooklyn Nine-Nine.

King James of the basketball courts has also hinted at an acting career. He got the ball rolling with an appearance in Amy Schumer’s comedy, Trainwreck in 2015. He also pulled double duty as producer and star of 2021’s Space Jam, a follow-up to the OG anime/live-action comedy, which starred Michael Jordan.

Still, don’t expect to see James on the silver screen in the near future, as he is busy trying to secure his fifth NBA championship with the LA Lakers in the NBA.

Brazilian footballer Neymar da Silva Santos Júnior had many doing a double take when he briefly appeared in two episodes of Money Heist Part 3. In the show, Neymar played João, a monk at the Italian monastery where Berlin and Palermo plotted their Bank of Spain heist.

It doesn’t seem like he’s about to quit football anytime soon though, having just extended his contract with Paris Saint-Germain F.C.