SweetDream Malaysia Wants You To Swim Well To Sleep Well
CultureRead More
Here’s A First Look At The New Snake Eyes Movie Starring Henry Golding
CultureRead More
Built To Last: Luxury Watches Made Of Precious Metals
StyleRead More
Virtual Travel Experiences You Can Enjoy From The Comfort Of Your Couch
TravelRead More
Want honest food & drink reviews or handy dining & nightlife guides? We have it all. Sign up to receive it.

A brand spanking new hotel in Four Points by Sheraton and the additional fame courtesy of a Michelin-star awarded chicken rice franchise, Kuala Lumpur’s Chinatown is on a roll. Tying all the gentrification of the historical and cultural heartbeat together is the rejuvenation of the once gritty Kwai Chai Hong.

The hidden alley with an unusual cul-de-sac design many decades ago was said to be an unscrupulous haunt for young punks and subsequently the alley was christened after their antics and notoriety. Customary of many inner-city neighbourhoods in Kuala Lumpur, Kwai Chai Hong was relegated into a state of neglect as residents moved on and moved out. The alley spent years unbeknownst to visitors despite its proximity to the bustling Petaling Street market. It all changed last year thanks to the foresight of a group of young people and financial aids from Think City, a unit of national sovereign wealth fund Khazanah Nasional, who channelled their resources into remaking Kwai Chai Hong and bringing it to modern lights.

Now, Kwai Chai Hong tempts visitors with its bright lights, expansive murals, and contemporary restaurants and bars. The anchor tenant of Kwai Chai Hong, Concubine KL, arguably encapsulates the spirit of this laneway in its most earnest.

Housed in a refurbished pre-war shoplot which is increasingly rare in the city, the restaurant and bar welcomes curious diners through its doors on its ground floor facing Lorong Panggung, and cajoles them to discover Kwai Chai Hong which lies at the end of another set of doors. One bar is located on the ground floor. But if you wish to discover Concubine KL’s cavernous first floor, a second bar awaits and is ever ready to entice after a perilous-looking flight of stairs up, bolstered by narrow steps reminiscent of the good old days. Rest assured, assures co-owner Andy Yap, as works were poured into the extensive renovation to ensure it is safe. Walls were largely left untouched with exposed brickwork, but adorned with murals that remind visitors, the place is at the centre of Chinatown’s revival. Red lanterns too dot the ceiling.

Apart from boasting a lounge-like ambiance for relaxation and acting as a refuge from the city’s heat and humidity, one end of the first floor opens up to a terrace that overlooks Kwai Chai Hong, providing visitors a vista not found in other establishments in the locale. The terrace, which is decked out in repurposed wooden furniture salvaged from Andy’s other line of work, plays to the tune of sustainability. In the air throughout the restaurant is upbeat music, much to our delights. 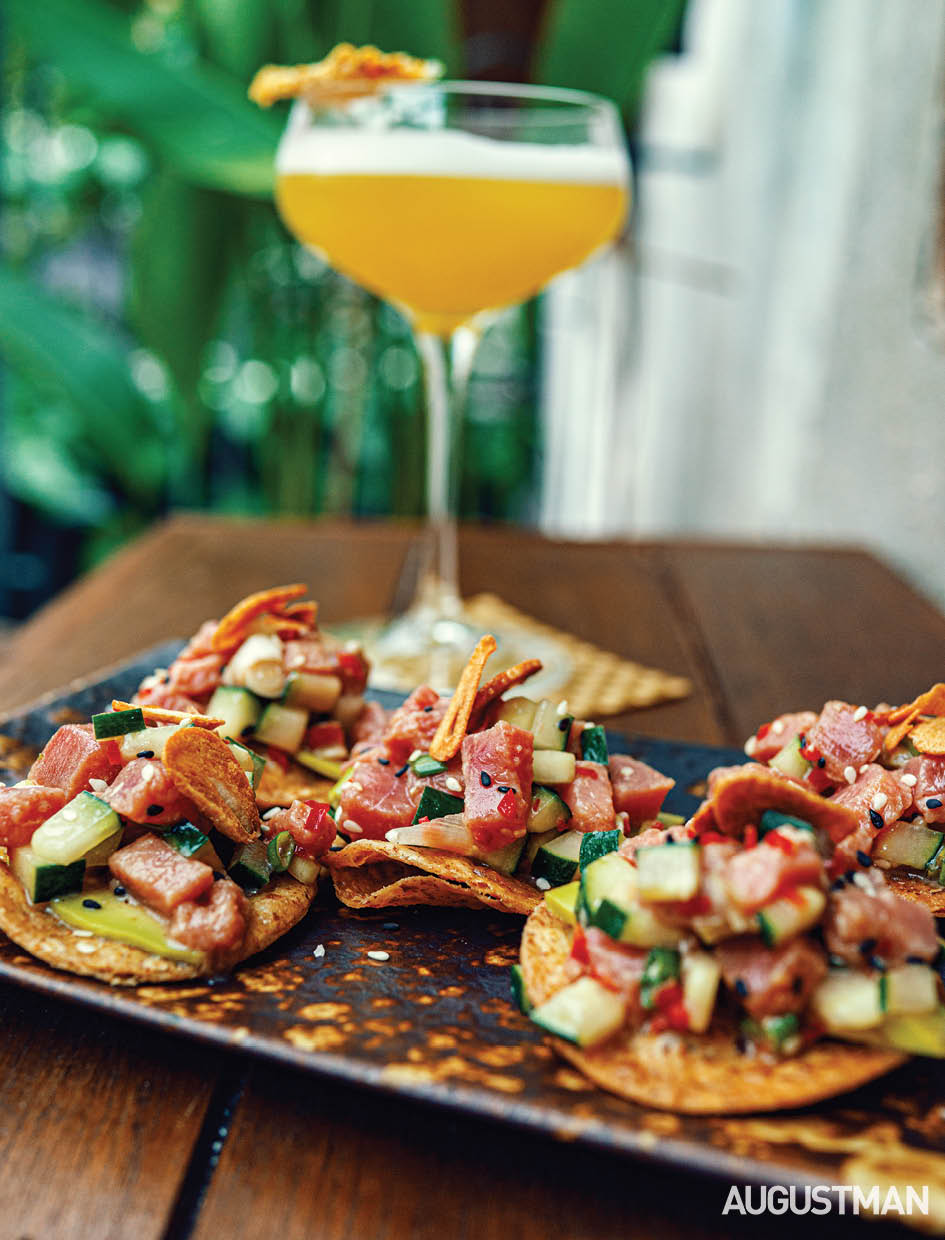 The menu, be it drinks or food, is in line with the expectation – modern, contemporary and most importantly delectable. There are Japanese-inspired salads such as yuzu spinach (baby spinach, yuzu truffle, parmesan cheese and crispy gyoza skin), green sesame (snow pea, edamame, alfalfa, cucumber, sesame and gama dare), and charred lettuce (grilled lettuce, katsuobushi, tabiko dressing and anchovy).

Apart from steaks, lamb racks, chicken sliders and grilled mackerel, meats also come in the form of various skewers. For those who are fearless to carbs, Concubine KL offers a range of tostadas, buns and dumplings. Szechuan prawn dumplings tingle the tongue, as do keropok nachos that unionise Malaysian favourites such as keropok, sambal and anchovy with those of Mexicans. Yuzu is also found in Concubine KL’s cocktail menu. This time around, it is concocted into the bar’s unique take on the perennial gin and tonic (Bombay Sapphire, yellow chartreuse, yuzu, kaffir lime and soda). If you prefer having a rum base, Bacardi 8 is inventively combined with pineapple, pineapple cordial, asam powder and nutmeg soda to devise a lift-me-up.

Drinks aren’t limited to these couple of cocktails, naturally. There is more. Perhaps the whimsically named Minyak Cap Kepak is worthy of your endeavour? If you arrive early – after 5pm, happy hours run till 8pm daily with selected big brew beer, craft beer, house wine and cocktails all priced democratically.