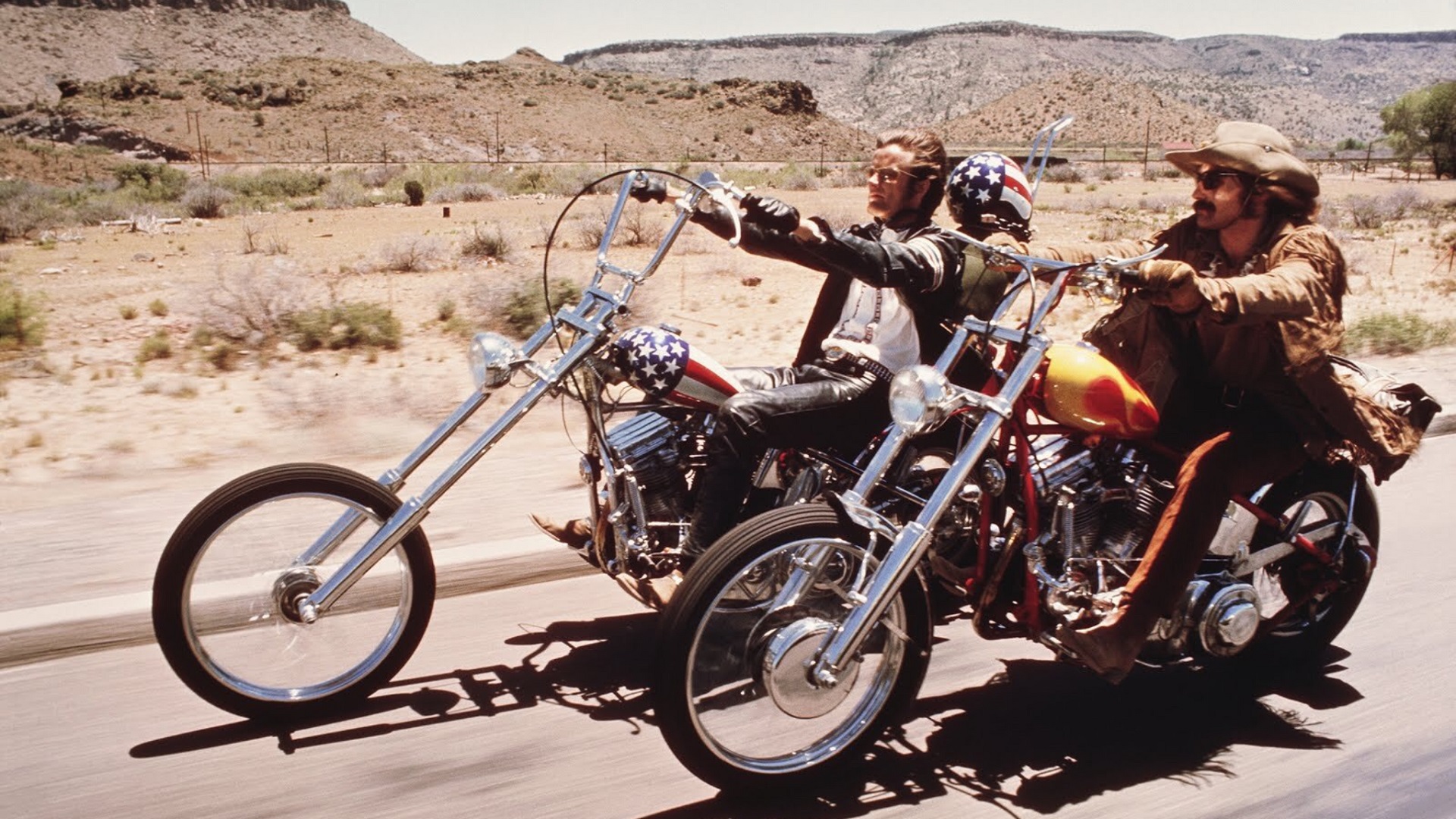 10 Unforgettable Motorcycles In Films That You Would Want To Ride

Check out some of the most iconic motorcycles in films.

From James Bond’s Aston Martins to the Dodge Charger in The Fast and the Furious — though the four-wheelers in these movies have shone and dazzled its audience with riveting car chases, another machine that has always brought a certain coolness to the big screen is the motorcycle.

While bikes symbolise adventure, there is also a sense of freedom about them, which is why everyone — from society rebels to daredevils — connect with a two-wheeler like a samurai to his katana. From Thunderbird, which Marlon Brando immortalised, to the iconic ‘Captain America’ chopper, here are some of the legendary motorcycles in films.

1950 6T Triumph Thunderbird in The Wild One

Around the time of the release of The Wild One in 1953, British motorcycle maker Triumph was concerned about its brand’s image. The reason being — the film’s controversial storyline, by those standards of the time. Yet, the company later admitted that The Wild One helped cement the Triumph’s legacy. But how did that happen?

Enter Marlon Brando. The actor’s phenomenal portrayal of Johnny Strabler, the head of a biker gang in 1950s America, laid the foundation for the film’s success. Adding to his gang leader image was a 6T Triumph Thunderbird, a bike that was originally owned by the actor and one that is today an icon among motorcycles in films.

The Thunderbird was powered by a two-cylinder 650cc engine. Unfortunately, the film’s subject led to its ban in the United Kingdom (UK) for 14 years. Nonetheless, The Wild One set a legacy on both sides of the pond. It is considered the first film that popularised biker gangs and is counted among the most iconic counterculture films of all time.

Arnold Schwarzenegger was perhaps the biggest reason behind the superhit status of this 1991 film. Dark shades, leather jacket, stone-cold expression, Austrian accent and the iconic shotgun flip created a steely look that worked for Schwarzenegger’s character.

However, there’s another aspect of this remarkable image — the heavy-duty Harley-Davidson Fat Boy that completed the enigma around his futuristic machine character known as T-800. The motorcycle, with Schwarzenegger on it, became the highlight in the scene where John Connor (Edward Furlong), on a dirt-bike, is trying to escape T-1000 (Robert Patrick), who is driving a tow truck, through flood control channels.

This is where Schwarzenegger, our hero Terminator, comes in on the Harley-Davidson Fat Boy to save the day. In 2018, the bike was sold by LA-based auction house Profiles in History for US$ 480,000, which was almost double the estimated price, to an unnamed bidder with just 630 kilometres on its odometer.

Norton Model 18 in The Motorcycle Diaries

The 2004 film explores the real-life journey of Ernesto Guevara de la Serna and Alberto Granado before the former became “Che” for millions around the world. The duo journeyed on a motorcycle nicknamed La Poderosa II (“The Mighty II”) through South America, exploring cultures and witnessing people’s hardships.

La Poderosa II was a single-cylinder 1939 Norton 500cc motorcycle owned by Granado. Makers of the film used Norton International besides restored Nortons and bikes made by Suzuki for some scenes. Gael García Bernal portrayed the legendary Argentine revolutionary while Rodrigo de la Serna essayed the role of Granado.

One of the greatest war films ever made, The Great Escape (1963) features one of the most unforgettable motorcycles in films. Based on a real incident during World War II, the film stars Steve McQueen and Richard Attenborough in prominent roles.

Among the many fabulous scenes, bike lovers will bet on the one in which Captain Virgil Hilts (McQueen) tries to make a daring escape on his bike by jumping over German-Swiss fences with Nazis hot on his tail.

Considered one of the best stunt scenes in film history, McQueen rides a Triumph TR6 Trophy 650cc painted and modified to resemble a Nazi German BMW motorcycle. Known for his love of bikes, he rode the TR6 in most of the scenes.

However, the earlier-mentioned scene, which was filmed over a 12-feet high fence, was performed by his double, Bud Ekins. The bike used in the film was sold to a farmer, which was later restored and put on display at Triumph’s UK manufacturing facility in Hinckley, Leicestershire, in 2017.

Starring the late Prince in his debut film, Purple Rain (1984) is deeply loved by the singer-songwriter’s fans for its music, story and — of course — Prince. One of its most memorable images is the movie poster, showcasing the pop icon astride a motorcycle. A significant imagery for the film is after all that of a singer who is coping with issues at home and his band while trying to make his name shine on the music scene.

Painted purple, the bike adds dimensions and charisma to Prince’s character, The Kid. Although it seemed like a Harley-Davidson chopper to some at the time, it was actually a modified twin-cylinder Honda CM400A. Named ‘Hondamatic’ because of its two-speed automatic transmission, the bike underwent major changes to fit Prince’s persona and his 5’2” frame.

Among them were the low king-and-queen style seat and a large windshield. It also bore an early version of the singer’s ‘Love Symbol’. However, today, the image of Prince sitting on the bike resonates more with pop culture.

Directed by Quentin Tarantino and starring Uma Thurman, the two-part Kill Bill is a must-watch for anyone who loves blood-splattering action. Thurman, who essays the role of an elite assassin on a revenge mission, rides a Kawasaki ZZR250 in the first part of the film released in 2003.

The yellow-coloured bike perfectly complemented her attire, which was inspired by martial arts artist and actor Bruce Lee’s iconic yellow jumpsuit from Game of Death (1978). The six-speed sports bike is internationally renowned as a member of the Kawasaki Ninja series of bikes. In the same film, the Crazy 88 gang, comprising the antagonist’s henchmen, are seen riding Yamaha FZS400.

Remember the scene from Top Gun (1986) where Maverick, played by Tom Cruise, rides his bike to Charlie’s (Kelly McGillis) home? That is the Kawasaki GPZ900R, another member of the Ninja family, which went on to become one of the famous motorcycles in films.

Launched by the Japanese bikemaker around two years before the release of the film, the GPZ900R today is considered the first among modern-day sports bikes. Its 908cc four-cylinder engine gave the bike a top speed of 254 km/h, perfect fit in a film about fighter aircraft and naval aviators of the time.

The six-speed bike makes a cameo appearance in the upcoming Top Gun: Maverick (2021) but it is unclear whether we will get to see Cruise riding it.

Tom Cruise’s history with bikes on screen is similar to that of Vin Diesel’s with cars. Portraying the role of Ethan Hunt, who is a secret agent, Cruise can be seen performing various stunts on different types of bikes in the Mission Impossible film series. Mission Impossible Fallout (2018), the latest MI movie, shows him riding a BMW R nineT.

That’s no doubt among amazing motorcycles in films, but our pick will be the one he rode in Mission Impossible II (2000), and the kind of stunts Triumph Speed Triple was used to perform is tough to describe in words, but we’ll try.

Towards the end of the film, Hunt performs a dangerous stoppie, turns around with the bike and shoots at the car chasing him. Known for its iconic twin headlamps and powerful engine, the Speed Triple was picked by Cruise himself for Mission Impossible II. In the same sequence, the antagonist, Sean Ambrose (Dougray Scott), chases Hunt on a red Triumph Daytona 955i, a four-stroke, six-speed bike with a top speed of around 263 km/h.

The Matrix trilogy is about Neo (Keanu Reeves), a mysterious man, on a quest to defeat the virtual world created by the Matrix. The superbike appears in the famous chase sequence of the second instalment of the trilogy, which was released in 2003. In the scene, Trinity (Carrie-Anne Moss) tries to escape the Twins on a freeway to save Keymaker (Randall Duk Kim).

The powerful six-speed, liquid-cooled, 4-stroke engine delivered a minimum of 112 horsepower and a top speed of about 257 km/h, which was quite prominently visible in the scene.

What makes the chase more amazing is the fact that the entire freeway was constructed from scratch costing US$ 2.5 million. This was done to perform the breathtaking stunts on the bike that we see in the movie. The success of the film and the response to the scene made Ducati release a limited Matrix edition 998.

Easy Rider (1969) is one of the most culturally significant movies in Hollywood history, and part of it is because of the ‘Captain America’ chopper. The film is about two bikers, Wyatt (Peter Fonda) and Billy (Dennis Hopper), who begin their journey from Los Angeles to New Orleans after a drug deal to discover themselves in a changing American society.

The chopper that Fonda rides is known as ‘Captain America’, and it remains one of the most unforgettable motorcycles in films for any bike lover. Its most distinguishable feature is the stars-and-stripes patterned American flag-themed fuel tank. Originally a Harley-Davidson Hydra-Glide, the bike was bought at a police auction for US$ 500 along with three others. These were then modified by chopper builders Cliff Vaughs and Ben Hardy.

Together with pinstriper Von Dutch, they gave the iconic ‘Captain America’ a makeover to two of the bikes. The other two served as the main and backup bikes for Hooper’s character in the film. One of the ‘Captain America’ bikes was partly destroyed at the end of filming while the remaining three were stolen.