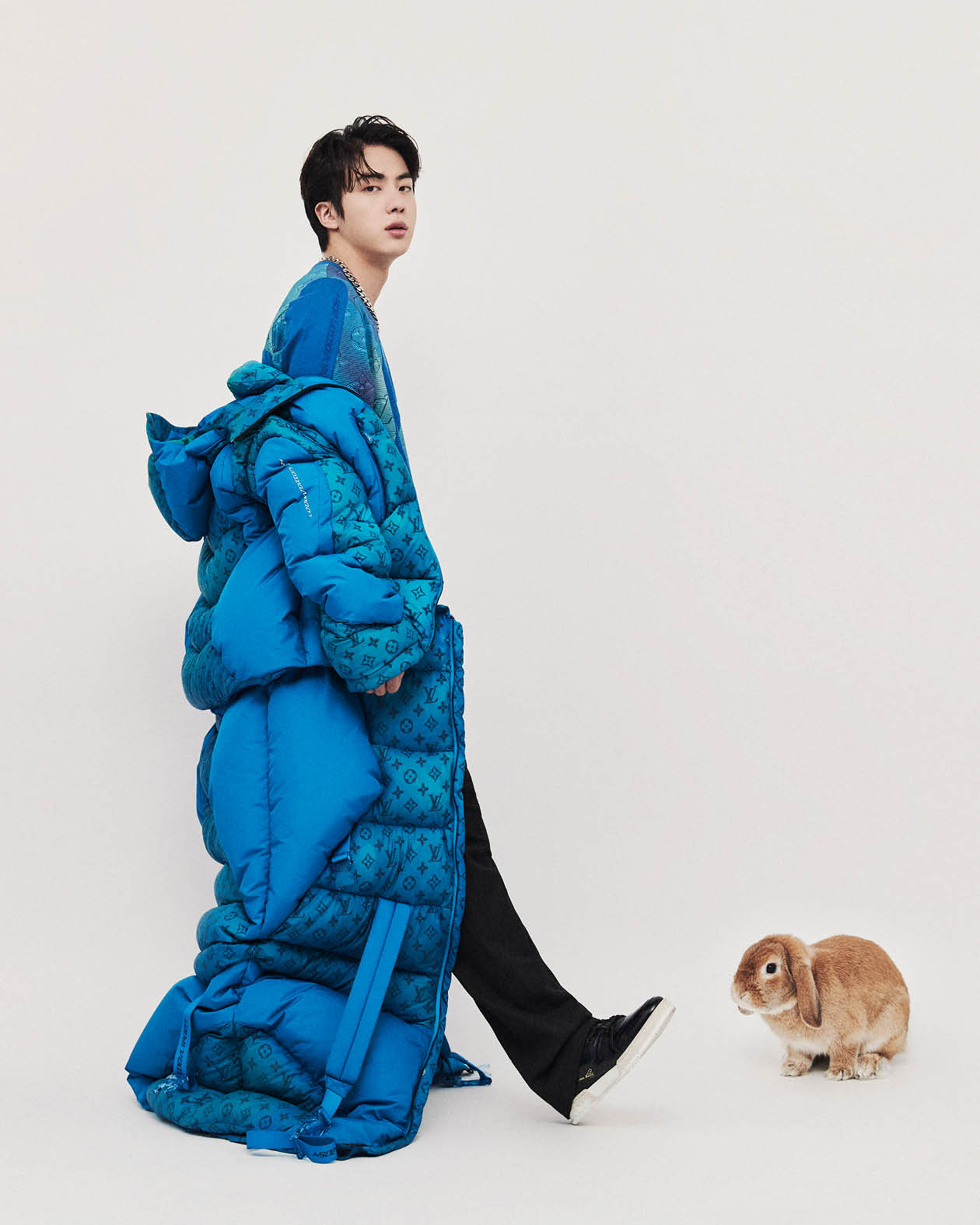 If you search for “BTS Jin” in a search engine, “Coldplay” comes up as a related search. The news was sensational.

I’m a huge fan of Chris Martin. It still feels so amazing that we got to collaborate with Coldplay. It was a precious moment. I love Viva la Vida and Fix You, and we got to cover Fix You! I was overwhelmed.

How did you get to meet with Coldplay?

At first, we talked about many things over video conferencing. He asked us what kind of styles we liked and what kind of stories we wanted to tell, and we made this song together. When Mr. Martin later came to Korea for recording, he would always ask, “Is there anything you guys want to try?” We came up with many ideas, and one of them was for him to sing in Korean and for us to sing in English. He thought it would be so much fun, so we even recorded it. Though it didn’t make it into the album in the end, it was one of the most memorable moments from our collaboration. 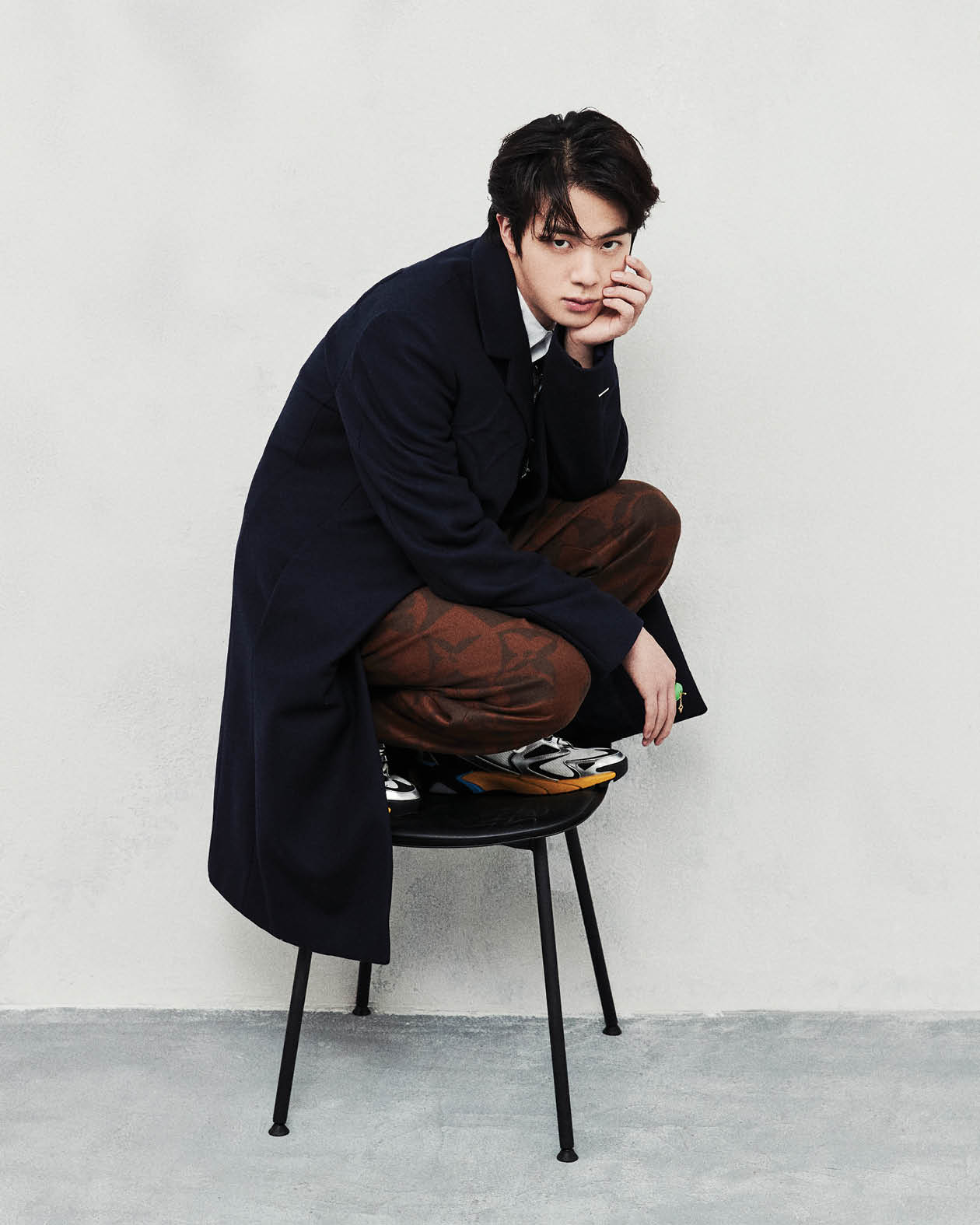 Chris Martin gave you his guitar, right? A gift from your idol, how happy you must have been!

I was so happy. After the collaboration, we had another chance to meet him in the US. One time, it was just the two of us in the studio, and I said to him, “I like your guitar.” I’d been a huge fan of him, so to me, everything about him is fabulous. But then, he offered me that guitar! I didn’t mean I wanted it so I wasn’t sure if I should take it but at the same time, I was exhilarated.

Where is that guitar now?

I keep my treasures at the entrance to my place. When you open the door, you face a two-meter-long “RJ” standing tall. The guitar is beside him. I actually asked Mr. Martin where I should keep the guitar. He said right beside the RJ is good, so I didn’t have to think too much. 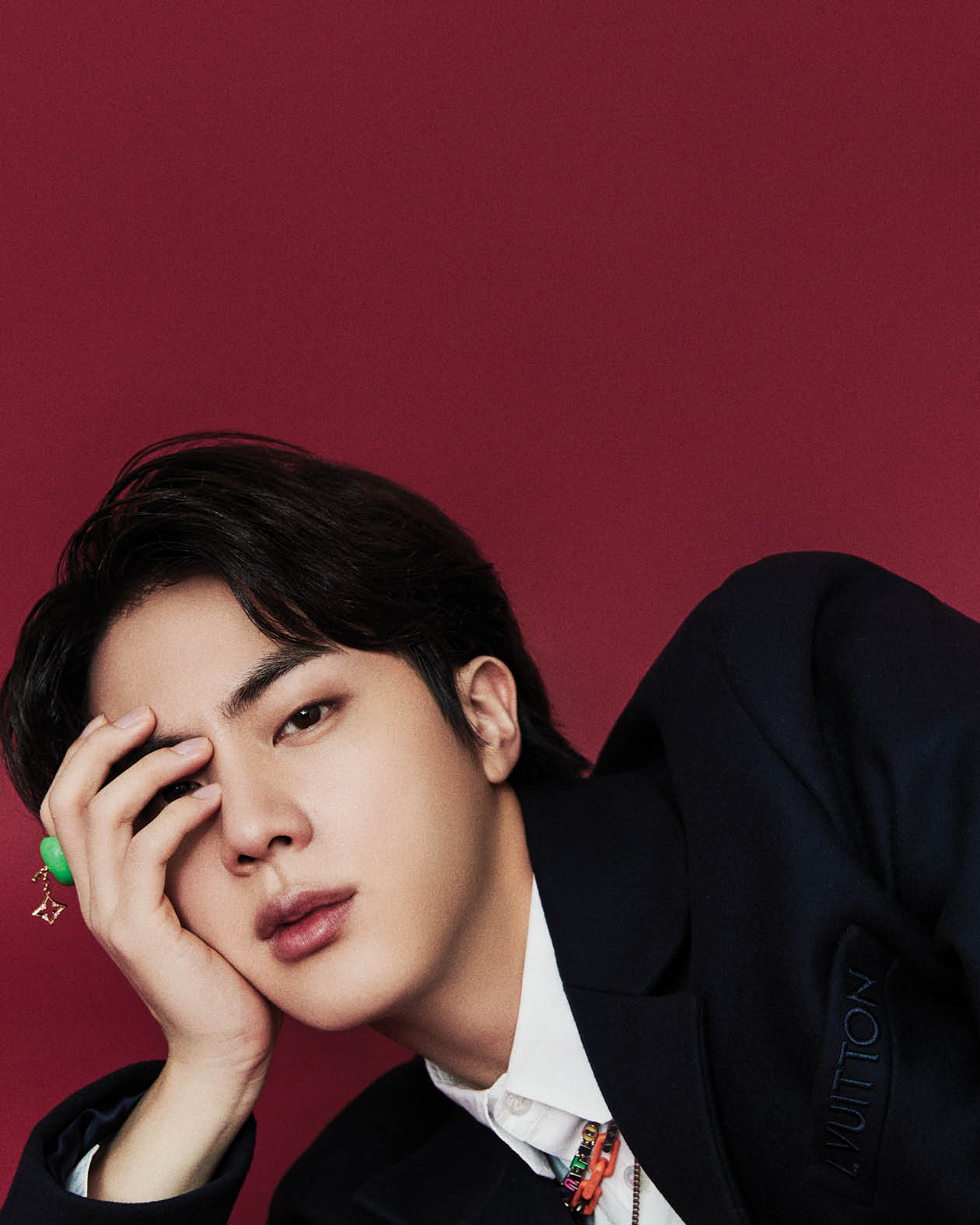 Can you pick one single performance that’s most memorable?

Yes, I can! It was during “IDOL” in France. We replaced the last part of the original song with a funky rhythm. Our fans usually face us during concerts. But during that last part of the song, they began to face each other, not us, and dance. They were having so much fun! I was happier than them while watching that video.

How are “Jin of BTS” and “soloist Jin” different? You’ve mentioned that your solo songs seem to emphasise the emotions more deeply.

As BTS, all seven of us become one in harmony for our songs, so setting the keys or interpretation of songs cannot be done for anyone in particular. But it’s possible to do so in solo songs. The song can be made just for me, in the style I want to try, and in the best notes to capture the pitch that works the best for my voice. Same for the lyrics and the melody. As a vocalist, I think I would be closer to something more emotional and sentimental rather than genres that require fancy skills. 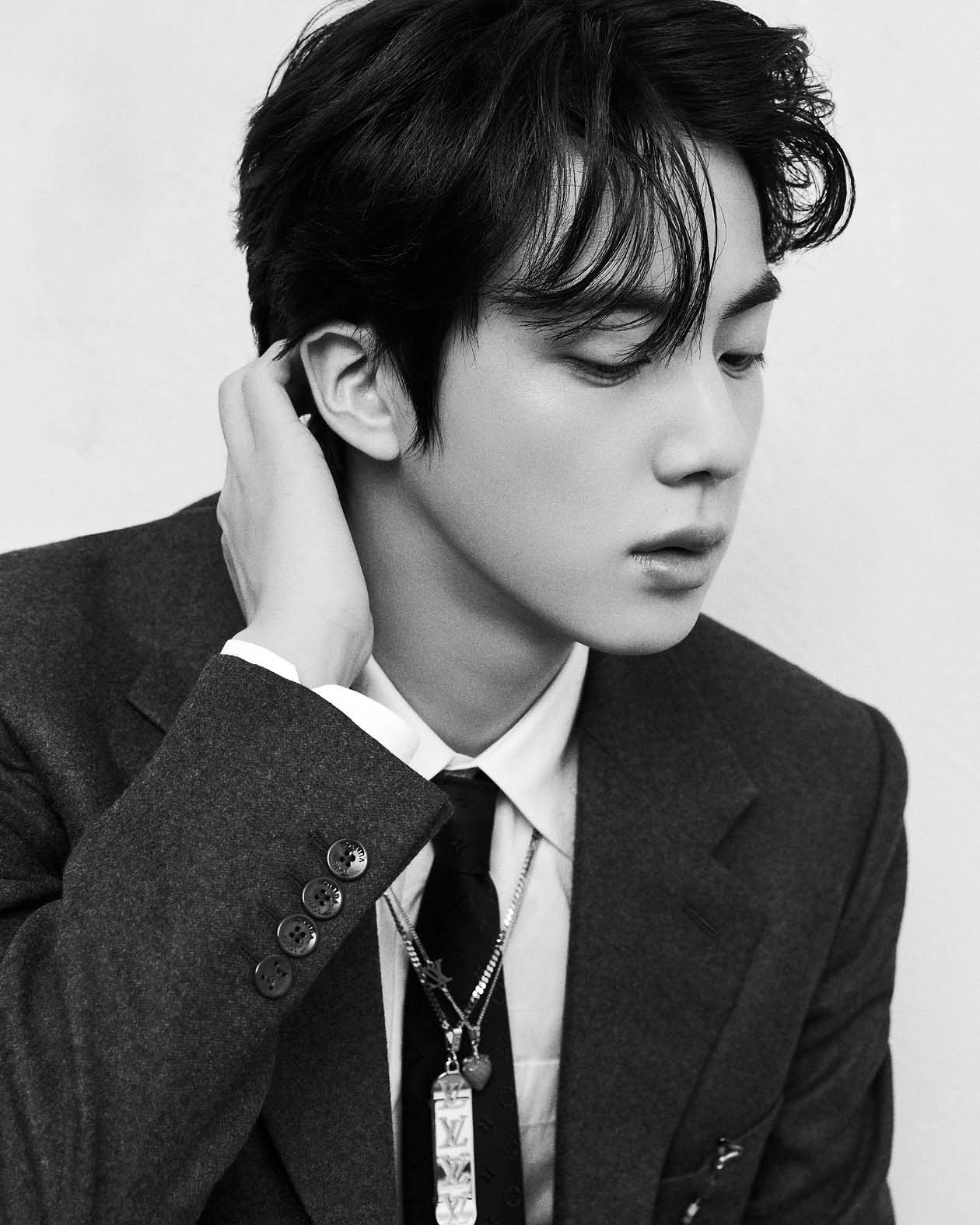 What messages do you want to convey in your solo songs?

I’m a bit cautious. I wouldn’t be able to write about things that I don’t deeply relate to. The environment, for instance. I want to talk about it in songs, but I ask myself, “Am I qualified to talk about this? Have I cared enough? Have I been really active about this issue?” These are some things one needs to think deeply about.

I usually try to get rid of my thoughts. When a message comes to mind, I need to take note not to forget. I’m more of a spontaneous writer. Lately, I was writing and erasing some lyrics over and over for three or four months, and then one day, an idea came to my mind, and I finished the first verse in 10 minutes. 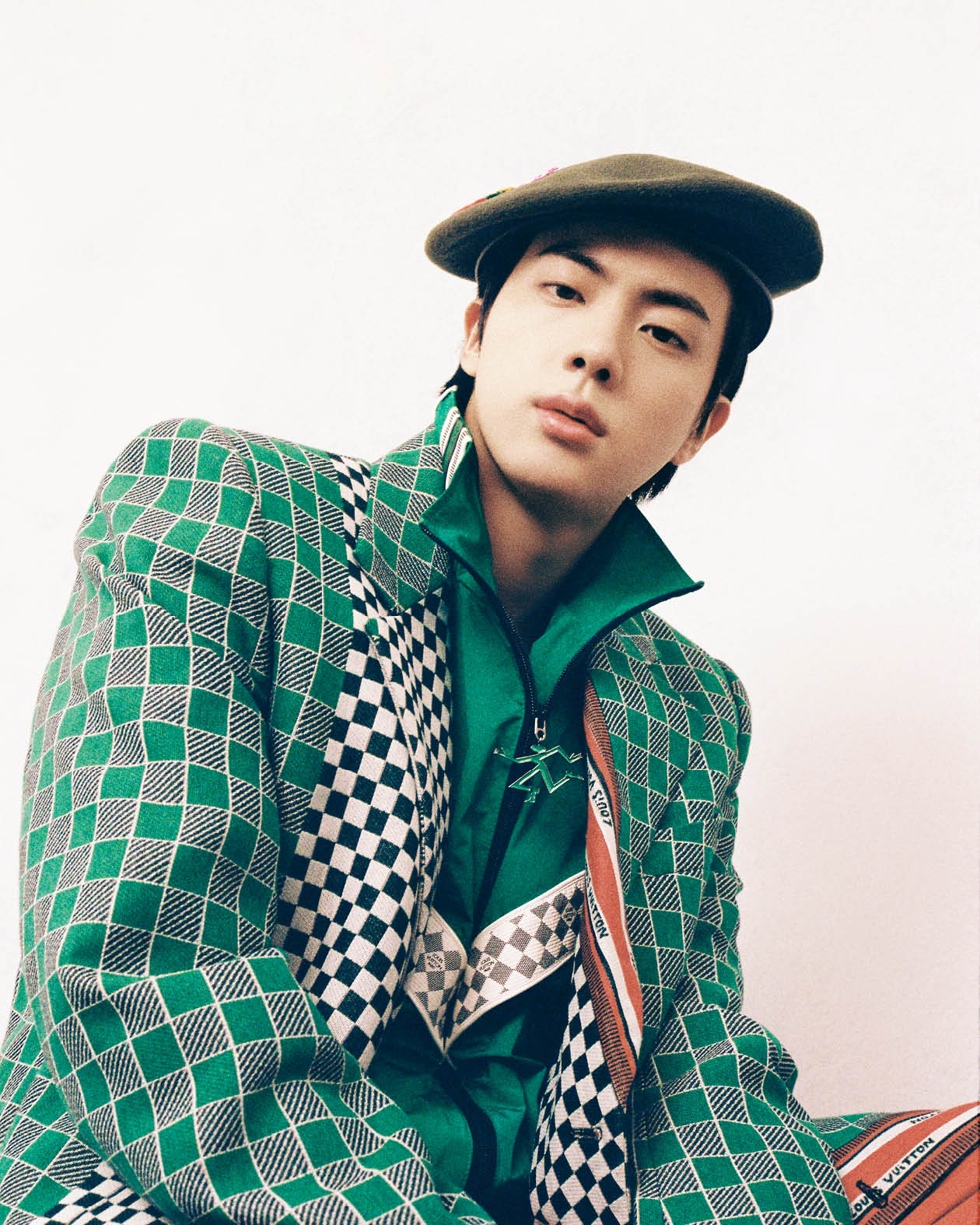 Can you pick one album or song that resonated the most with you?

Personally, it was Burning Up (Fire). The lyrics, “Live your life,” opened my eyes. “Those who hate me will hate me no matter how hard I try, and those who love me will always be there for me.”

Another New Year is upon us. What would you write in your New Year’s greeting card?

I’m not sure if I’m qualified to say something like this, but I want to say to young people ringing in the New Year: You’ve done great, and you are still doing great. If you feel burdened to start anew, let the burden go a little. Let go of things a little and enjoy this new start. 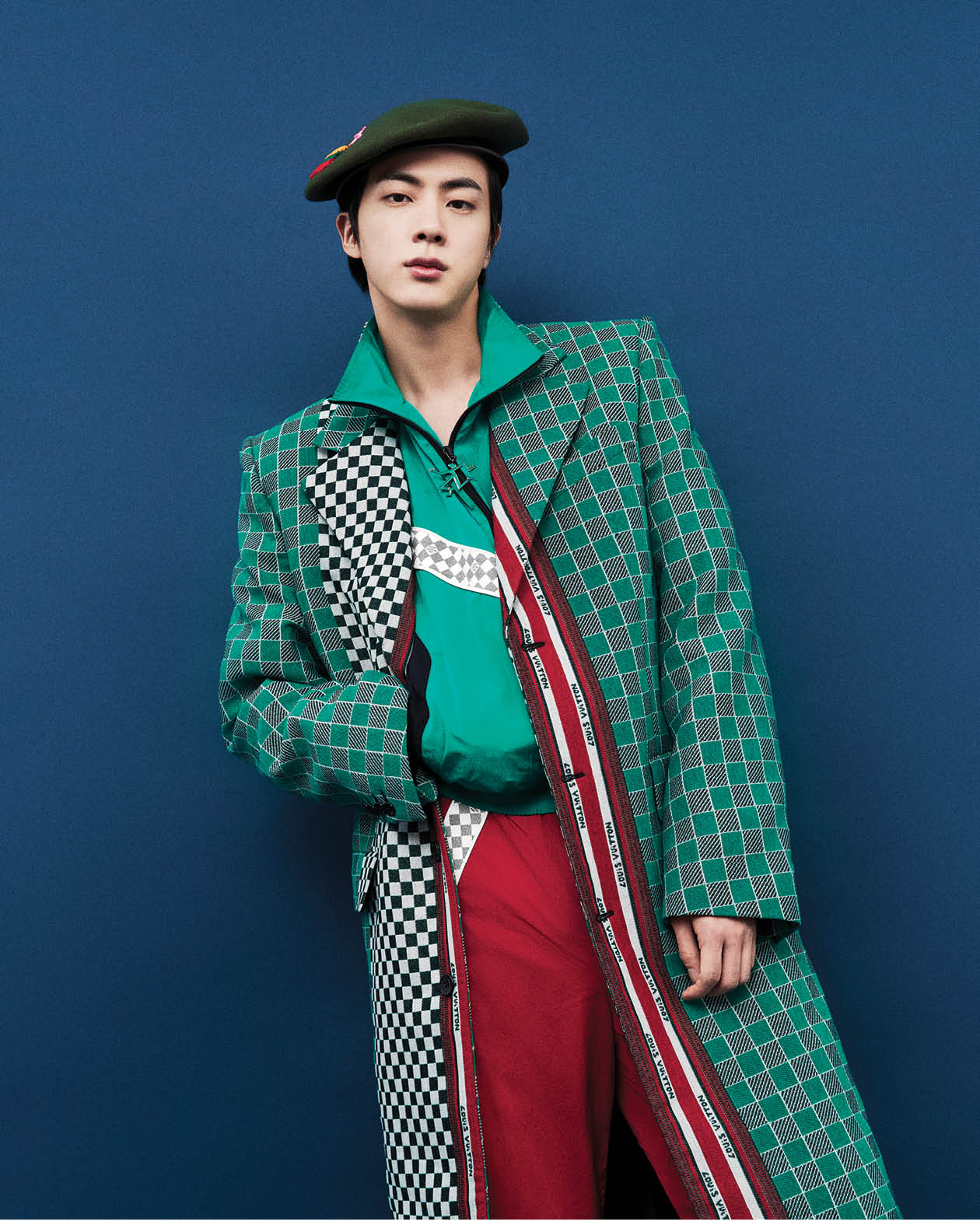