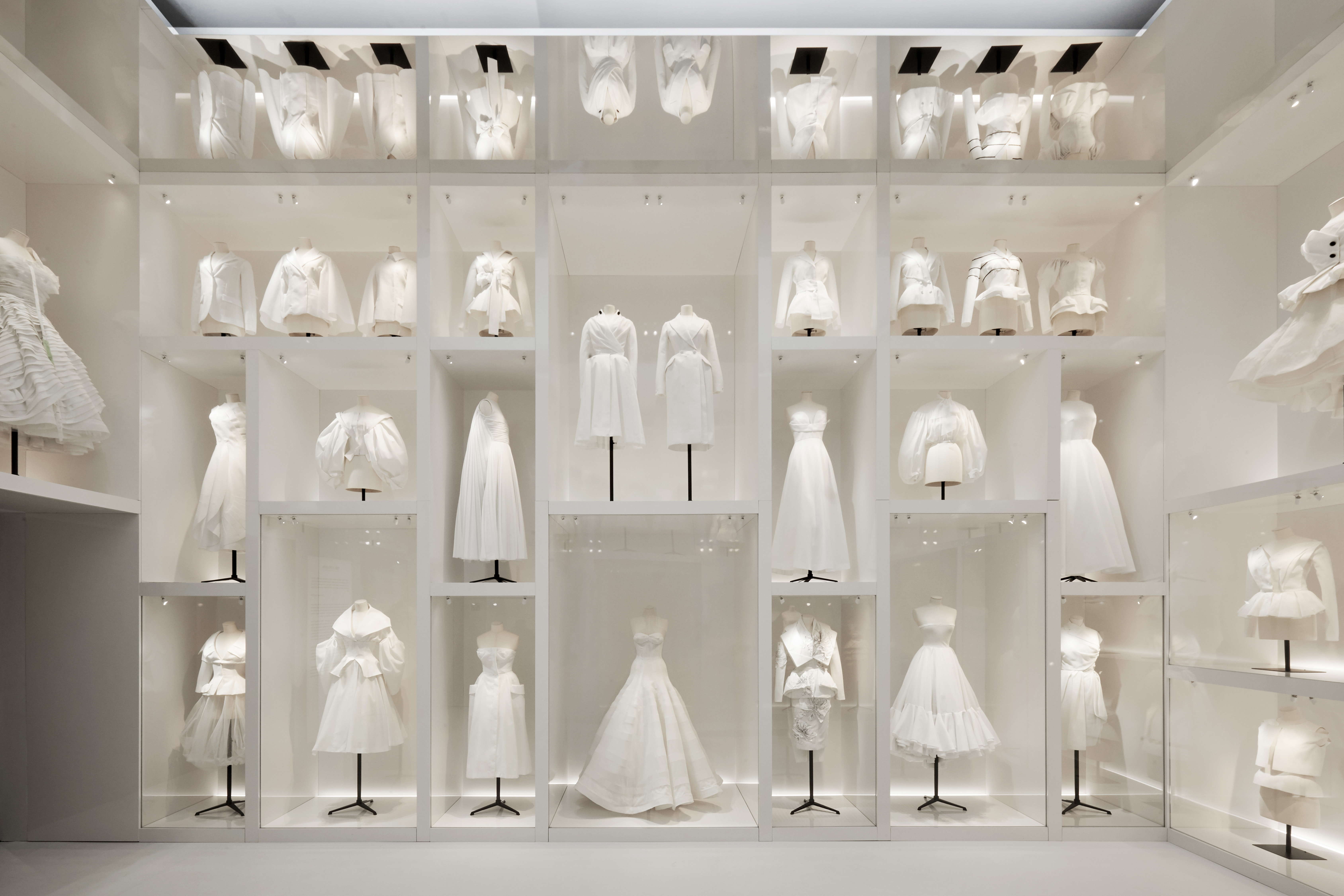 How Fashion and Art Have Shaped the Industries Together

Much like how an art piece is up to the interpretation of the beholder, the weight that fashion carries for each individual differs as well; while some may get by with “the sweater that was selected for you by the people in this room from a pile of stuff,” as Miranda Priestly condemned in The Devils Wear Prada, others would rather have front row seats when Oscar de la Renta introduced cerulean into the off-the-rack palettes – seeing fashion as a work of art, and of the same calibre as those on display in museums.

Hence, you could say that fashion and art are the best of friends through time, while meeting during different climatic points of fashion’s golden eras, embracing each other as if the periods apart in between never existed whenever they meet again.

From collection highlights to art-like exhibitions to contemporary collaborations, we explore this marriage between creative industries that has been around long before we are here, and will still persevere long after we are gone.

OFF THE RACK: fashion and art collaborations

When mentioning the hybridisation of these two industries, fashion most often and most commonly meet with art in the form of the designers’ collections. Many luxury fashion brands out there have converged with their favourite artists or art pieces, either disguised amidst a season’s collection, or going full out as a whole.

You could pretty much say that Yves Saint Laurent was the designer that made such a collaboration possible, if not pioneered it, when he concocted the Mondrian collection in 1965, paying homage to several modernistic artists, but most specifically to Piet Mondrian, which the collection took its name.

Not only were the dresses a direct reference to Mondrian’s Composition art series from the 1930s and 1940s, the technicality of the wool jersey and silk A-line dresses was a masterpiece on its own: pre-dyed fabrics for each colour came together in precise cutting and of haute couture techniques that required intensive work.

Another icon from the past would have to be the fusion of Italian fashion designer Elsa Schiaparelli and Spanish Surrealist artist Salvador Dali’s works. Schiaparelli’s Lobster Dress was the end result of the designer’s collaboration with Dali in Paris’ 1930s, an era in a place where the most articulate creative minds got together for some of the city’s most cultural happenings.

Dali’s Lobster Telephone sculpture was a suggestive one, (he saw the lobster as an archetype of sexuality), and Schiaparelli turned many heads when she translated the understatement upon a dinner dress, with the image of the lobster across the crotch area, embellished with sprinkles of parsley.

In more modern times, Japanese pop and feminist artist Yayoi Kusama’s vivid and immersive masterpieces are distinctive upon any form of mediums besides the art canvas: whether it’s something life-sized and mesmerising at the five-storey Yayoi Kusama Museum in Tokyo, or as delicate as those seen upon limited edition capsules with fashion brands like Marc Jacobs and Louis Vuitton – Kusama’s trademark artworks of protruding tentacles and polka dots are meant to “transport you to quiet cosmos, to a lonely labyrinth of pulsing light,” as Hyperallergic stated in its in-depth analysis of Kusama’s work.

Since Kim Jones took over the creative helm at Dior men in 2018, he has quickly created for the brand an archive of collaborations with renowned artists around the world. When he debuted as creative director during the spring/summer 2019 season, Jones gave the brand an overhaul by adding pink into Dior men’s usually sombre palettes, when he chose to collaborate with Brian Donnelly, the American artist and designer more known as KAWS.

Donnelly’s iconic style of using x’s on hands, nose and ears of his clown-like figure, as well as reworks of renowned characters over the years, spilled into Jones’ collection and Dior men’s house codes.

ON DISPLAY: fashion as objet d’art

On the other side of the spectrum, where fashion pieces from iconic fashion designers are considered objet d’art themselves, we can find them in all their grandiose in museums around the world, much like the Vermeers and Monets of yore. Following his death in 2010, the Metropolitan Museum of Art (The Met) in New York, and the Victoria and Albert Museum (V&A) in London hosted the Alexander McQueen: Savage Beauty exhibition in 2011 and 2015 respectively, in commemoration of the celebrated British fashion designer.

Consisting of six separate galleries, the exhibition showcased McQueen’s works that went as far back in the early 1990s (‘The Romantic Mind’); to his exploration of the Victorian Goth in the 1740s (‘Romantic Gothic and the Cabinet of Curiosities’); to his experimentations on Eastern influences, natural and organic materials; to the Darwinian venture of integrating the natural world with technology (‘Romantic Naturalism’).

The three-month exhibition at The Met saw over 17,000 sold; the museum opened until midnight during the final weekend of the exhibition, with queues waiting over four hours for entry – the first for the third most visited museum in the world. The exhibition enjoyed over 650,000 patrons, making it the most popular fashion exhibit to date.

Across the Atlantic, V&A sold over 480,000 tickets during its leg of the three-month exhibition, staying open for 24 hours during one of the days in the last weekends of the exhibition – also a first for the world’s largest museum of decorative arts and design.

The Met and V&A are no strangers to fashion exhibits: last year, V&A hosted the Christian Dior: Designer of Dreams exhibition that traced the history and impact of one of the most influential couturiers in the 20th century, highlighting icons such as the Pérou short evening dress (autumn/winter 1954), the Écarlate afternoon dress (autumn/winter 1955), and the revered Bar Suit of spring/summer 1947.

That being said, you can’t mention The Met without its anticipated annual Met Gala, an annual fundraising gala for the museum’s Costume Institute, with the hottest celebrities as patrons, to mark the launch of the year’s themed fashion exhibit – the abovementioned Savage Beauty and Impossible Conversation exhibitions were two of such exhibits in 2011 and 2012, respectively.

It is just the tip of the iceberg, seeing celebrities dressed to the nines according to the year’s exhibit theme (either earning thumbs-up’s and -down’s from the critics) – from Rihanna’s golden Oriental fur-trimmed gown by Guo Pei in 2015; to Zayn Malik’s Machina do by Versace in 2016; to Ezra Miller’s rather trippy attempt on camp fashion last year dressed in Burberry.

Before the doors open for The Met’s fashion exhibitions every year, you could say that these celebrities were very much “works of art”, acting as previews of sort to what’s to come within the museum.

TAKING IT TO THE STREETS: fashion and the contemporary art

With the continuous effort of the luxury fashion industry to associate itself with the younger crowd, (on top of getting creative directions from newer and younger directors like Kim Jones for Dior men and Virgil Abloh for Louis Vuitton), brands have taken its brand off the high shelves to the streets with advertising campaigns and activations that relate more to the younger audience.

The more recent #GucciArtWalls to hit the streets were those during World Refugee Day in June last year, as part of the brand’s Chime for Change program. In collaboration with Artolution, a non-profit, international, community-based public art organisation founded in 2009 by artists Joel Bergner and Max Frieder, Gucci made room on its murals for the organisation to replicate community artworks that have been created around the world.

Closer to home, Bvlgari has partnered for the first time with Singaporean graffiti artist Ceno2 for a live spray-painting at the outdoor atrium of ION Orchard, where he showcased his emblematic style of “graffiti fine art” (the medium of spray paint and the edgy flair of street art, paired with the skilful mastery of Western fine art). The artist unleashed his artistic zeal on two sets of hoarding, measuring 18x11x2.4 metres and 13x13x2.4 metres respectively, coinciding with Bvlgari’s holiday season outdoor installation late last year.

Besides street art, street performance is also a chosen medium for fashion brands to collaborate with notable names from that genre. As part of Fendi’s F is For… Fendi campaign, the brand engaged with artistic dancers from all over Europe for a freestyle dance-off on the Fendi rooftop in Rome. Seven young talents like Junior and Sunni, two of the world’s most recognised and original Bboys and breakdance pro; street dancer and choreographer Fishboy; alongside the first-ever female Popping Champion DeyDey were donned with the Fancy Fendi sneakers for a funky-battle that embodies the freedom of movement.

The seasonless capsule collection of 17 menswear essentials Soma by @cosstores was presented to the public at the 94th Pitti Uomo – in the form of dance!⠀ British choreographer @waynemcgregor and the nine dancers from his Company moved through the Istituto degli Innocenti in Florence, instilling directional movement and fluidity to the collection that encapsulates the core COS aesthetic and values of traditional methods and modern techniques.⠀ The performance is available to watch online at www.cosstores.com, and the collection is now available at the COS Florence store at Via della Spada, and will be available online from September 6 onwards.⠀ .⠀ .⠀ .⠀ #COSxPittiUomo #PittiUomo #Menswear #Style #Fashion #Dance #WayneMcGregor

COS, on the other hand, worked with choreographer Wayne McGregor during the launch of its seasonless capsule collection Soma at the 94th edition of Pitti Uomo – the brand’s its first foray into dance or choreographed art. McGregor and his nine Company dancers moved through the Istituto degli Innocenti in Florence in an explorative and contemporary performance that brought to the forefront the design process and function of the collection, which encapsulated the core COS aesthetic and values, using traditional methods and new techniques to form an understated collection, designed for longevity.