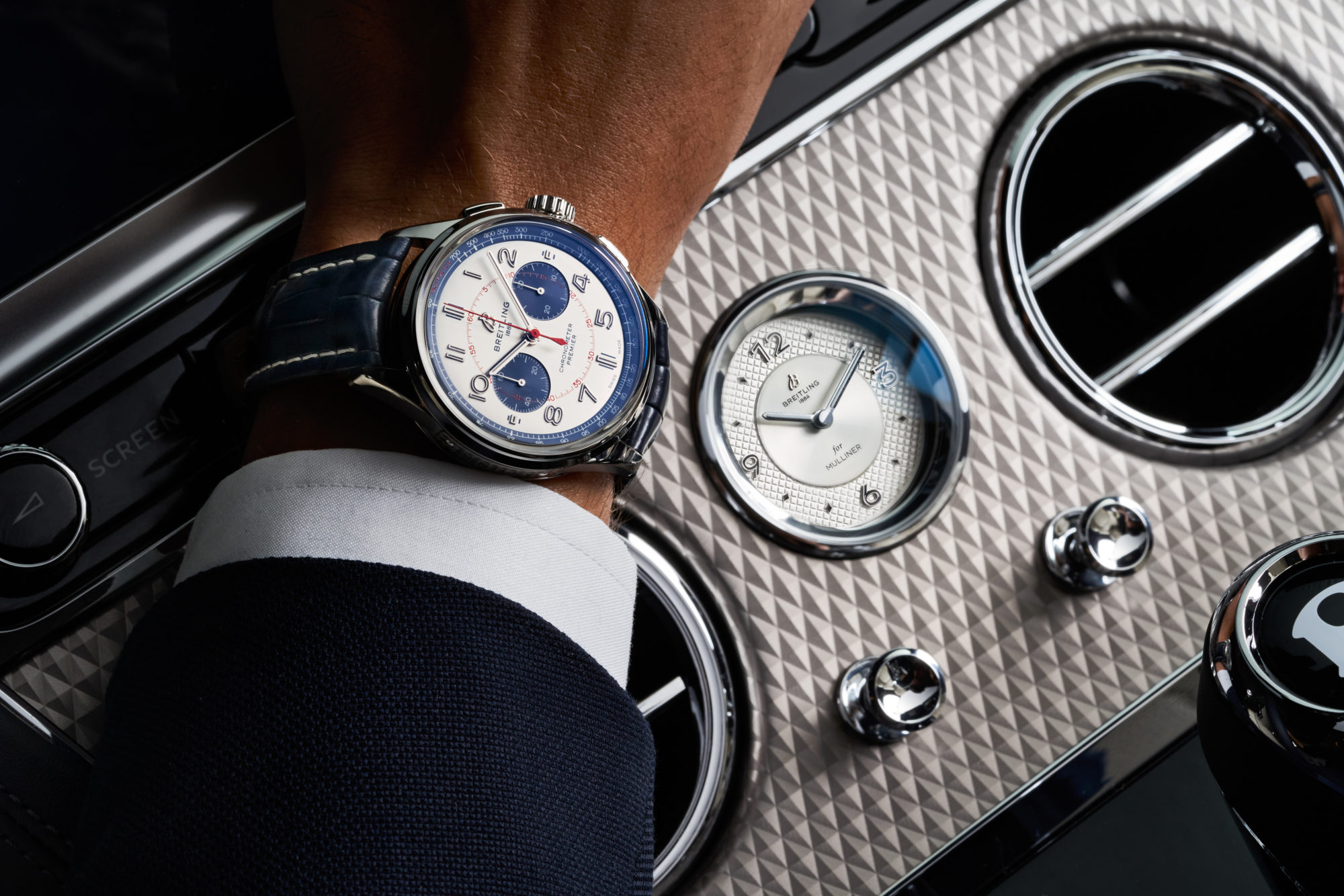 Breitling‘s partnership with Bentley Motors can be traced back to 2002, when the iconic automobile brand was designing its legendary Continental GT and Breitling was commissioned to create an onboard clock that would reflect the unparalleled luxury, quality and performance of the new grand tourer, which made its debut in 2003.

In actual fact, the two manufacturers share historical links that go back even further. Willy Breitling, the visionary watchmaker and grandson of founder Léon Breitling, was a committed Bentley owner who, since the late 1940s, had been a familiar sight on Swiss roads behind the wheel of one of his beloved Bentleys. It’s said that the man, known for his flawless design instincts and stylish flair, could not have imagined driving another automobile.

This year, in celebration of their 17 years of partnership, the longest ever between a watch brand and a car manufacturer, claims Breitling, the official watch partner introduces the Premier Bentley Mulliner Limited Edition timepiece, based on the Bentley Continental GT Mulliner Convertible, the most luxurious GT ever designed, and, in particular, the Breitling clock in the luxury automobile’s dashboard.

Representing the pinnacle of luxury grand touring, the Continental GT Mulliner Convertible builds on the success of two other Bentley First Editions from the centenary year: the GT Number 9 and the GT Convertible Number 1 limited editions.

A perfect display of Mulliner craftsmanship, the Mulliner Convertible is the only Continental GT to have a Breitling-edition clock in the car. Its silver face mirrors that of the Premier Bentley Mulliner Limited Edition watch, while blue, red, and white accents highlight the importance of British design.

Limited to 1,000 pieces, Breitling Premier Bentley Mulliner Limited Edition presents a 42mm timepiece in stainless steel on a blue alligator leather strap, which echoes the Imperial Blue leather interior of the car. Its elegant silver dial recalls the Bentley Continental GT Mulliner Convertible’s dashboard clock and features two blue counters – a 30-minute subdial at 3 o’clock and a small-second subdial at 9 – an indication revealing the presence of the Breitling Manufacture Caliber 01, with an impressive power reserve of approximately 70 hours.

The links between the watch and the clock are further strengthened by their complementary sets of Arabic numerals: the four cardinal points of the dashboard clock and the intermediate points of the wristwatch. The red second hand and centered 60-minute scale mirror the red stitching found throughout the interior cabin of the Bentley Continental GT Mulliner Convertible.

On the left side of the case is a plate with an engraved “Bentley” inscription, whose design is based on the engine spin dashboard found in historic Bentleys. Around the watch’s transparent sapphire caseback is an inscription that reads “MULLINER EDITION – BREITLING – ONE OF 1,000”. Above all, the Breitling Premier Bentley Mulliner Limited Edition watch is a COSC-certified chronometer.