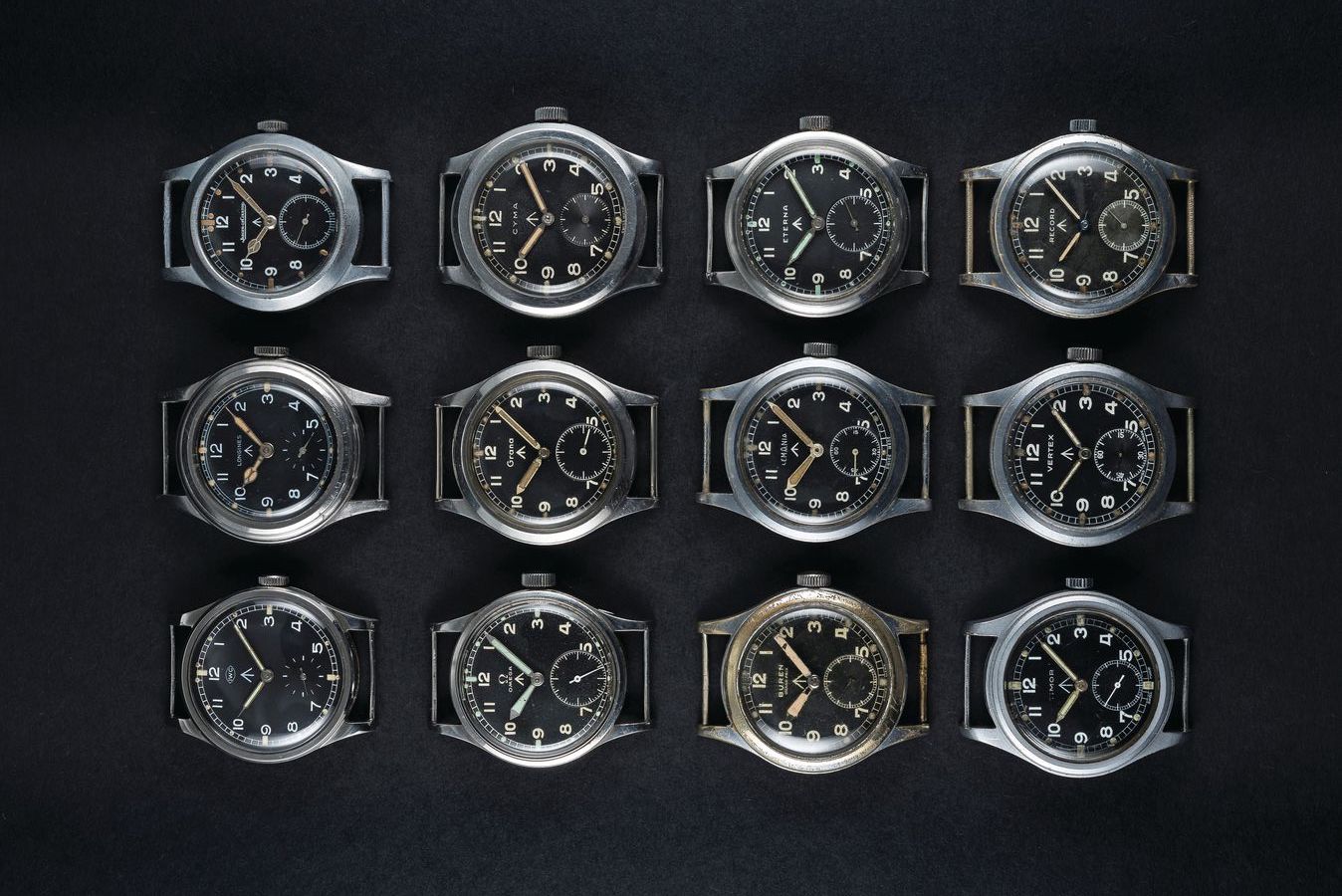 Everything you need to know about The Dirty Dozen vintage watches

Just by looking at today’s ornate mechanical watches, you’d struggle to think that they were anything other than just luxury items. However, if you’d take just a short jump back in time, these mechanical marvels were in fact necessities. With the absence of today’s technology, the synergy of a movement’s moving parts was the most efficient way to keep time. And beyond the average consumer’s timekeeping needs, these mechanical watches were also once pivotal tools for military operations.

During the Second World War, every participating nation needed tough, reliable timekeepers for their military personnel. The Americans had their A-11 spec watches, B-Uhr watches were made for the Germans, Seikosha watches for the Japanese and finally, the watches we are going to be talking about, the W.W.W. commissioned by the British Ministry of Defence (MoD) a.k.a. The Dirty Dozen.

AND THEN THERE WERE TWELVE

Not to be confused with the 1967 movie of the same name, in the watch world, The Dirty Dozen refers to the 12, mostly Swiss manufactures who made watches commissioned by the British Ministry of Defence in the 1940s. Before The Dirty Dozen, the British army was equipped with what were civilian watches with military dials, and as you can imagine, these didn’t hold up in the heat of battle. Thus, the MoD drafted out a new set of specifications for a wristwatch calling it W.W.W. — Wrist, Watch, Waterproof.

In this new specifications, the watch had to be between 35 to 38mm in diameter, not including the crown; have a stainless steel case; have a shatterproof crystal; have a black dial with luminous hour markers and hands, and a railroad minute track. For the movement, they specified the use of a 15-jewel movement between 11.75 and 13 lignes in size with chronometer grade precision. And finally, these watches had to be waterproof.

In the end, it came down to 12 Swiss brands who managed to fulfil the criteria set by the MoD: Buren, Cyma, Eterna, Grana, Jaeger-LeCoultre, Lemania, Longines, IWC, Omega, Record, Timor and Vertex. And because each manufacture was of different sizes, the number of respective watches supplied to the MoD also differs. However, it is estimated that some 150,000 of these watches were ultimately delivered to the British government.

A COLLECTION WORTHY OF ITS NAME

Identifying these watches are not all that difficult since there were only 12 brands that made them and because the look is also quite distinctive. The Broad Arrow insignia on the dial is a dead giveaway as these logos are a mark of property that belongs to Her Majesty’s Government. On the back of the Dirty Dozen watches, you’ll also find W.W.W. engraved in addition to some other military numbers.

Price is also not much of an inhibitor as you would likely be able to find most of them on eBay ranging from about USD1,000 to USD4,000 depending on the watch’s condition. The only exception to this is the watch from Grana. At the time, they only were able to deliver 1,000 to 1,500 watches to the MoD thus, when a watch like this pops up in auction the price is likely to be much higher. One recent case was a Grana auctioned by Trevanion & Dean at Whitchurch in 2018 for about GBP9,000. On acollectedman.com the price listed was GBP6,000.

Another reason why The Dirty Dozen can be quite hard to collect is because of the authenticity of the parts used to repair these watches. During the war, this task fell to the R.E.M.E. (Royal Electric & Mechanical Engineers) focused solely on getting the watch back to working condition without much thought put into the use of original parts. Also, after the end of the war in Europe, the MoD sold these watches to Allies like the Pakistani Military, the Dutch Military and the Indonesian military.

If you somehow managed to navigate through all these circumstances and managed to get all 12 in relatively acceptable condition, then you will be one of the very few collectors around the world that can claim to have a significant slice of British military history.

AS THE STORY GOES

These days, only a few from the 12 Dirty Dozen brands are still around. Cyma, Eterna, Jaeger-LeCoultre, Longines, IWC and Omega are all still making watches, albeit far removed from the spirit of these Dirty Dozen watches. Times have changed forcing the mechanical watch into the confines of ‘luxury items’ as opposed to the functional tool it once used to be. Although some of these brands are digging back into their past offering vintage homages to their military heritage but suffice to say we will never get another collection of watches from different brands, quite as storied and emotional as these 12, these Dirty Dozen.

The International Watch Company needs no introduction in the watch world. Having been founded by the American Florentine Ariosto Jones in 1868 the manufacture ultimately was set up in Schaffhausen, a Swiss city located very close to the German border. And thus during the Second World War, IWC was supplying watches to both sides. The W.W.W. was a part of IWC’s history with the British forces but on the other side of the coin, their Pilot’s Watches was also used by Luftwaffe pilots.

Although today IWC is a luxury brand with more elegant watches coming from its Portofino and Portugieser collections, it still has a Pilot’s Watch collection that pays tribute to their military-inspired timepieces. The modern collection takes their inspiration from the past and has garnered countless fans around the world, including John Mayer who has a big collection of IWC’s Pilot’s Watches. This year, all the IWC novelties are dedicated to the Pilot’s Watch collection offering plenty of brilliant pieces including a few that were inspired by the Spitfire, a plane that was used by the British Royal Airforce (RAF) before, during, and after World War II.

The Swiss manufacture Jaeger-LeCoultre also has a long storied history with the military of course with the W.W.W. but also with the Mark XI watch made for pilots. These watches were also chronometer grade timekeepers that went to the British Royal Airforce (RAF) and also the Royal Australian Air Force (RAAF).

These days however JLC are better known for their more elegant watches along with pieces that boast Haute Horlogerie and Haute Joaillerie elements. The most sporty watches in the modern JLC collection comes from the Polaris, which was inspired by the Memovox Polaris of 1968 and also the Reverso which remains an icon for the brand.

Omega also had a long history of military watches, supplying not only the W.W.W. to the British government but also equipping some of the RAF pilots with the Omega CK2129 as well. If you watched the 2017 film Dunkirk, Tom Hardy, who played the part of an RAF fighter pilot had this model on his wrist.

After the war, Omega went on to work with NASA. Their Speedmaster was the only watch to pass the stringent testing criteria set by NASA. Thus, Omega became known as the space watch and later on, the first watch to be worn on the moon.

If you are into watches, but at all, Longines would already be a household name to you as it offers quality watches at an affordable price. Having been in the industry since 1832 when it was founded, Longines has had a long, storied relationship with all sorts of industries including aviation, navigation, sports and of course the military. During World War II the W.W.W. watch wasn’t their only military watch as they also produced the Longines SS Czech Aviator, and supplied it to Czech pilots.

Thanks to their long history and well-documented knowledge, Longines has a Heritage collection dedicated to the resurrection of classic timepieces for the modern consumer.

The W.W.W. wasn’t the only watch that Eterna and Longines had in common. Around the same time, both these Swiss firms also made the aviator’s watch for Czech Air Force pilots. After the war, however, Eterna became more known for their KonTiki collection. Legend has it, the first of these watches were worn by Thor Heyerdahl, a Norwegian explorer that journeyed from South America to Polynesia on a wooden raft in 1947. The name of the raft was KonTiki and thus the Eterna watches they wore on this journey took on its name. Even up to the 1970s Eterna was supplying dive watches to the IDF, which is Israel’s brand of special forces.

Buren was a brand established in 1898 after being acquired by the British company H. Williamson Ltd and it was only in 1916 that they started using the name Büren Watch Co. After the stock market crash, the brand was sold to new Swiss management and in 1966 was once again sold, this time to the Hamilton Watch Company which effectively moved Hamilton’s production to Switzerland. Today the Buren name is owned by Schweizer Uhren Editionen based in Hamburg.

Cyma was founded by two brothers Joseph and Theodore Schwob in 1862 and in 30 years they built it into a manufacture that produced about 150 timepieces per day. Today, their HQ remains in the same factory in La Chaux-de-Fonds, Switzerland in the Jura Mountains, near Le Locle but are owned by Stelux International Ltd. a Hong Kong- based holdings firm.

The Grana brand still lives on until this day, but unbeknownst to most it is now better known as Certina. The Grana name was first used in 1906 named by the founders of Certina, Adolf and Alfred Kurth, after the location of their manufacture in Grenchen (Granatus is the Latin name of the town). It was only in 1938 that they adopted the name Certina and in by 1972 Certina employed 900 people and produced 600,000 watches every year. In 1983 Certina officially joined SMH Group (Swatch Group).

Lemania was founded in 1884 by Alfred Lugrin as a movement manufacturer. Although there were a few Lemania branded watches, it was the quality of their movements that gained the attention of the watch industry. In 1932 the brand merged with Omega and Tissot to form the SSIH Group and there it built the now-iconic Calibre 321 which was the movement found in the first Speedmaster. After the Quartz Crisis, the brand changed hands a couple of times until it was finally absorbed into Breguet in 1992 and its name lost in the annals of history.

Founded in 1903 in the Swiss town of Tramelan in the Bernese Jura, Record soon garnered a reputation for their high level of precision and were used in many watches commissioned by armed forces around the world. The Record brand was absorbed into Longines in 1961 and for a while, watches were produced with the double signature Record Longines. It is unclear whether the modern Longines Record collection was inspired by this classic.

Timor was registered Bernheim and Luthy (Bernheim & Co) in Chaux-de-Fonds, Switzerland on the 30th May 1923. In the beginning, the brand merely did assembly of watches, often purchasing movements and cases supplied by other manufacturers. It was only in 1939 that they started making their own movements. The brand disappeared during the early 1960s but has apparently been revived and may see a new W.W.W. watch appear in early 2020.

The Vertex company was founded in 1916 by Claude Lyons with two offices, one in London and the other in Switzerland. After a successful stint producing watches for the British Military in the 1940s the brand slowly deteriorated and finally, in 1972 Henry Lazarus, Lyons’ son-in- law, is forced to shut down the company. In 2016 however Lyons’ great-grandson Don Cochrane revived the Vertex name and even have a brand new M100 watch in tribute to the W.W.W.