Most Beautiful Olympic Stadiums And Venues Ever Built
CultureRead More
Survey Notes A Surge In Online Incivility During The Pandemic
GearRead More
Interesting Facts About The History Of The Olympics And Its Traditions
CultureRead More
Some Of The Most Stylish National Team Kits From The 2020 Tokyo Olympics
StyleRead More
What's up in the world of fashion, jewellery and watches? Sign up to receive it all.

Set between the sea and sky on the island of Giudecca, with stunning views across the Lagoon to Piazza San Marco, the Granai di Cipriani provided Jaeger-LeCoultre with the perfect setting to celebrate the 15th anniversary of its partnership with the Venice International Film Festival. The venue made a vivid impression of the evening’s “Celestial” theme, paying homage to the stars and planets that have always determined how mankind measures time as well as the night sky above Jaeger-LeCoultre’s home in Switzerland’s Vallée de Joux. Hosted by Catherine Rénier, CEO of Jaeger-LeCoultre, guests from all over the world were joined by celebrity Friends of the Maison, including Nicholas Hoult, Amanda Seyfried, Ni Ni and Italian actress Alessandra Mastronardi, in honour of great cinema and the long-standing art of fine watchmaking.

In an ambience of great charm and refinement, they witnessed the unveiling of four beautiful new watches inspired by the stars and celestial phenomena. These included a beautiful, fully gem-set interpretation of the Dazzling Rendez-Vous Moon combined with the icy sparkle of diamonds along with pink gold, glowing mother of pearl and a sumptuous bracelet set with white diamonds, linked seamlessly together to wrap around the wrist as softly as a ribbon. This was accompanied by two new interpretations of the splendid Rendez-Vous Celestial watch, inspired by the otherworldly beauty of the Aurora Borealis (Northern Lights). The special timepiece has united two of the Metiers Rares that Jaeger-LeCoultre has so thoroughly mastered – gem-setting and hand-painting, featuring a glittering bezel set with a colour-graduated circle of baguette-cut sapphires surrounding a mother-of-pearl dial that has been hand-painted to echo the ethereal patterns of the Aurora Borealis.

In addition, Jaeger-LeCoultre has reinterpreted its magnificent Master Grande Tradition Tourbillon Céleste, with a sleek new-generation case and subtle refinement to the dial. While appearing to have been simplified, the dial has in fact gained an extra dimension thanks to the use of Super-LumiNova, which gives the hour markers and constellations a heavenly glow in low light.

For this special celebration of cinema and fine watchmaking, Michelin-starred chef Christian Le Squer of Le Cinq, Paris, flew to Venice and created a special menu to complement the evening’s “Celestial” theme and capture the beauty of the setting. Thanks to the many values it shares with the art of filmmaking, Jaeger-LeCoultre is deeply attached to the world of cinema and, through its long-standing partnership with the Venice International Film Festival, is proud to contribute to the appreciation and advancement of the cinematic arts.

INSPIRED BY THE STARS

Here’s a closer look at the special timepieces presented by Jaeger-LeCoultre at the 76th Venice International Film Festival of la Biennale di Venezia.

As it is said that the best films can redefine the most quotidian experiences and elevate life to art, Jaeger-LeCoultre adopted a similar approach and reinterpreted the Master Grande Tradition Tourbillon Céleste from a whole new different perspective, with an orbital flying tourbillon that makes a complete turn of the dial over the course of 23 hours, 56 minutes and 4 seconds. This unusual time unit is the length of one sidereal day, calculated with reference to the more distant stars instead of the Sun.

The dial depicts the night sky of the Northern hemisphere, showcasing the constellations of the zodiac calendar framed by an outer ring displaying their associated symbols. A tiny gold marker, seen just beyond the orbit of the flying tourbillon, revolves around the dial annually, an indication of where we are within this alternative and ancient star calendar. Differentiating this model from previous versions is its contemporary and arresting new design. At first glance, the dial has been simplified in terms of texture and indication, but it has in fact gained an additional dimension which is visible only in low light. The hour markers and constellations have been filled with Super-LumiNova, evoking the glow of heavenly bodies on a clear night. 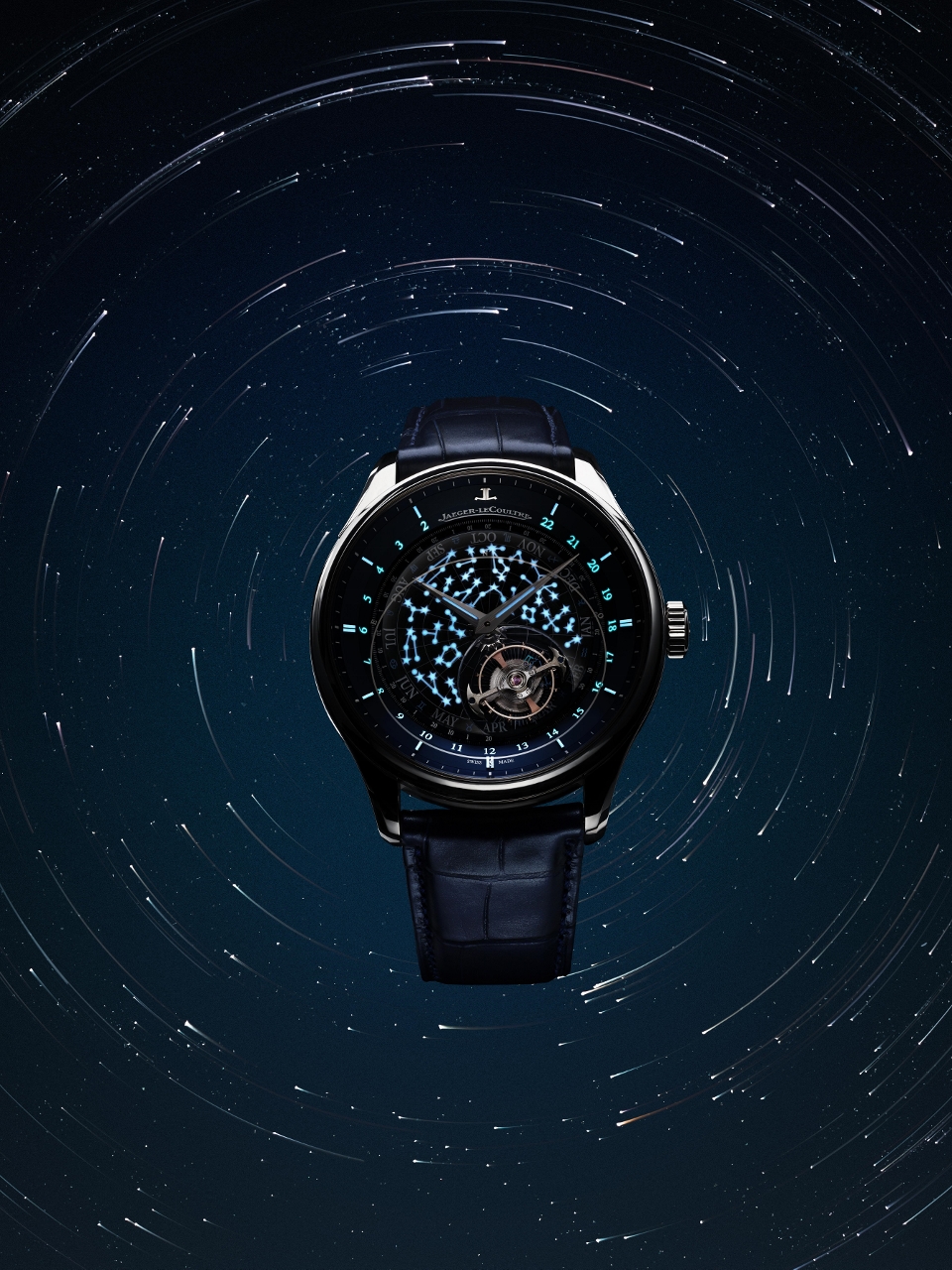 An elegant and contemporary case, part of the new generation of case design set by the Master Grande Tradition Gyrotourbillon Westminster Perpétuel, encloses the 334-component Calibre 946 of the Master Grande Tradition Tourbillon Céleste. A complex blend of surface textures, from satin to micro-blasting finish and mirror polish, comes together in a 43mm white-gold case that perfectly complements the deep blue dial and the roseate hue of the constantly beating gold balance wheel.

In both its mechanical and aesthetic aspects, the Master Grande Tradition Tourbillon Céleste takes us beyond the everyday. It is a rare timepiece that captures the rhythms of daily life in parallel with the movements of the universe. The Aurora Borealis, otherwise known as the Northern Lights, named after the Ancient Roman goddess of the dawn, usually visible only on the darkest nights near the Arctic Circle, has fascinated mankind since the beginning of time. Today, Jaeger-LeCoultre pays homage to this celestial phenomenon with a pair of beautiful Rendez-Vous Celestial jewellery watches, featuring elements that capture the vivid greens, purples, pinks and blues that stream and dance across the sky. In this new “Northern Lights” edition, mother-of-pearl and multi-coloured sapphires take centre stage, uniting two of the Metiers Rares (Rare Crafts) that Jaeger-LeCoultre has so thoroughly mastered – gem-setting, and hand-painting. Asymmetrical in composition, the dial is formed of two sections, set at different heights. On the upper section, the curvy Floral numerals – a signature of the Rendez-Vous collection – are graduated in size, to form a crescent that hovers above the lower dial. Outlined by an elliptical band of pink gold that draws the eye deeper into it, this lower section carries a hand-transferred imprint of a star chart, together with the signs of the Zodiac and names of the months. Displaying the night sky, the star chart shows the changing positions of the constellations in real time. The automatic mechanical movement Jaeger-LeCoultre Calibre 809/1 discreetly turns the disc counterclockwise in relation to the stars in step with the rotation of the Earth in 23h, 56m and 4s. 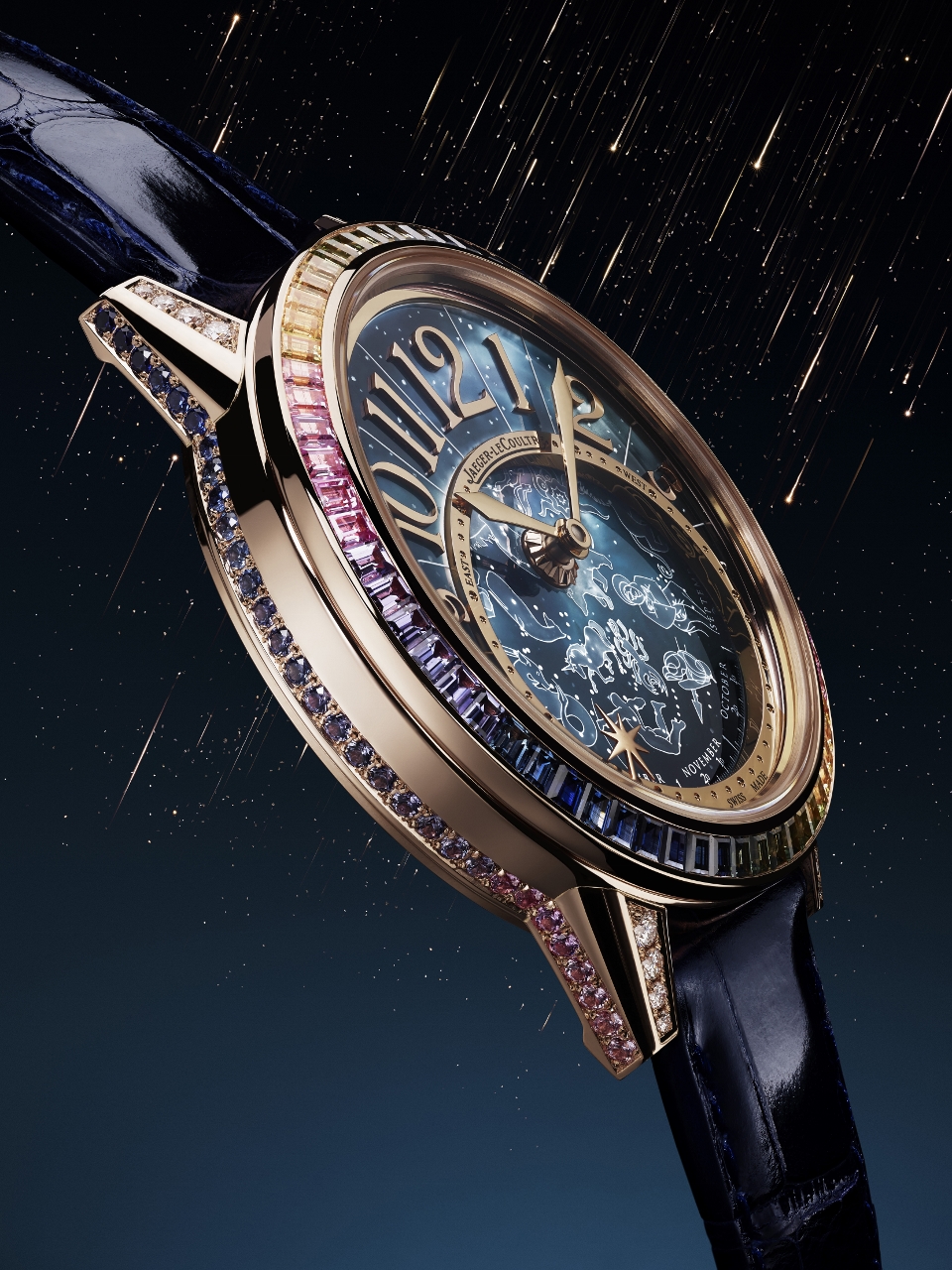 For the ‘Northern Lights’ edition, both sections of the mother-of-pearl dial are hand-painted with swirls of colour that reproduce the ethereal patterns of the Aurora Borealis – flowing seamlessly from the upper to lower dials. Shades of green and turquoise set the tone for one model; purples and blues dominate on the other – the colours intensified by the glowing mother-of-pearl beneath them. As the sky disc turns, the pattern of the background colours gently shifts, in a subtle echo of the dancing movement of the aurora. A hand-polished golden star – emblem of the Rendez-Vous collection – is set on the edge of the dial; by turning the second crown, it can be moved into position to mark the time of a special rendezvous. The rich tones of the dial are echoed on the bezel, which is set with a dazzling, colour-graduated circle of 64 baguette-cut sapphires. The gem-set case comes complete with lugs and crowns adorned with diamonds. A matching alligator strap in turquoise or violet completes these rare timepieces. This joyful expression of the cosmic world is brought to life by the Calibre 809/1, an in-house self-winding movement, created specially for the Rendez-Vous Celestial. This technically sophisticated movement incorporates a calendar mechanism to rotate the celestial disc in cadence with the changing night sky. While the complex movement is testament to the precision and technical skills of La Grande Maison’s finest watchmakers, the finishing and decoration of the movement, displayed beneath the transparent sapphire case-back, reveals their artistry. Fine decoration and finishing includes such details as circular graining, Côtes de Genève and pink gold signature winding rotor with Côtes de Genève decoration. Offered in a limited edition of 18 pieces for each version, the new Jaeger-LeCoultre Rendez-Vous Celestial brings together the maison’s artistic skills and technical acumen in a fitting tribute to the beauty of the night sky.