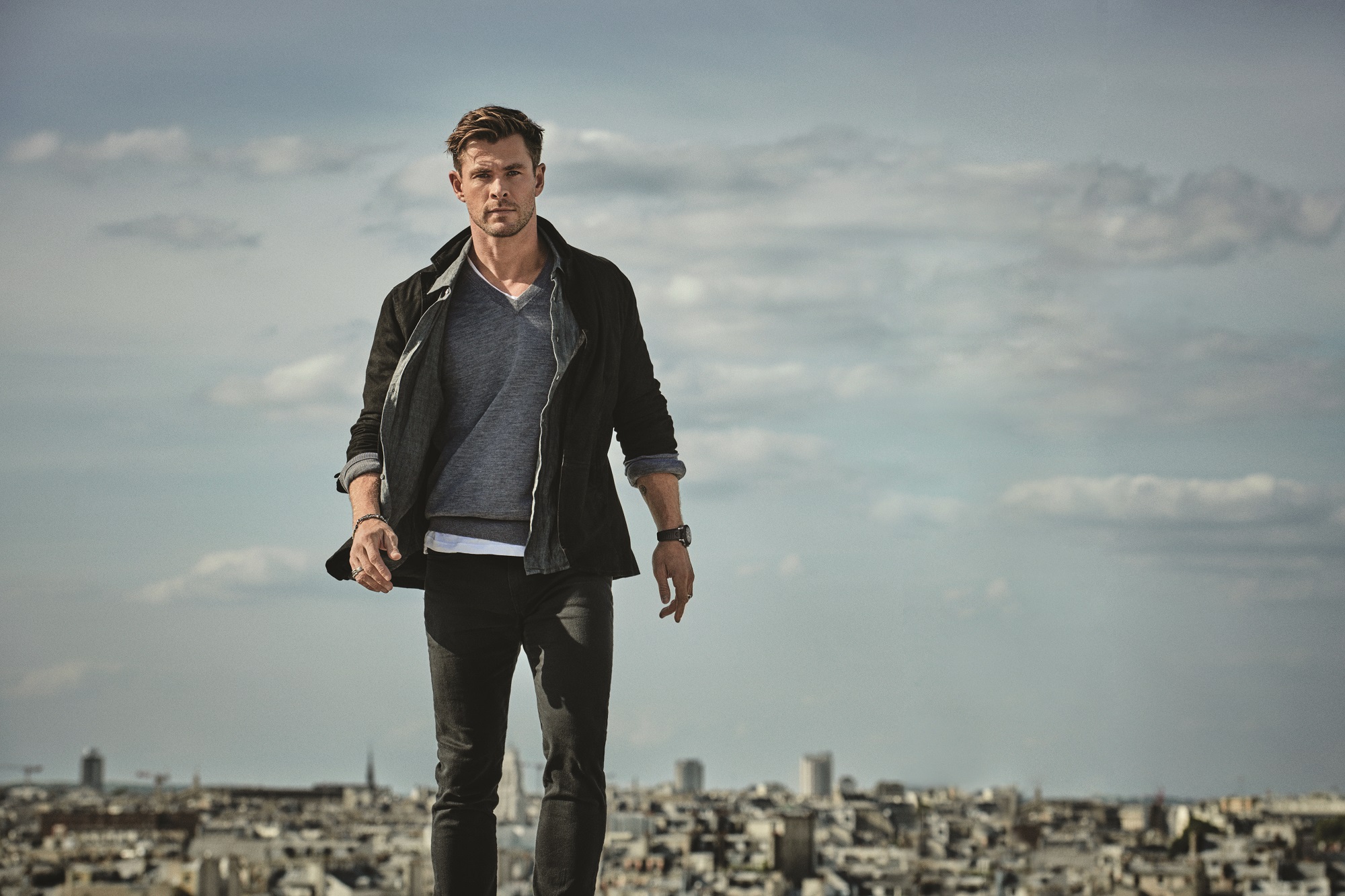 October 2019 Cover: Chris Hemsworth Takes it All in Good Stride with TAG Heuer

Chris Hemsworth is 36-year-old and already he is one of the most recognisable superstars on the face of the planet. Undoubtedly it was his portrayal of Thor in the Marvel Cinematic Universe that made him a household name and, in effect, one of the most bankable stars in Hollywood.

In addition to lending his talents to the biggest box-office film of all-time in 2019’s Avengers: Endgame, the actor is also featured prominently in four other films that dominate the top ten grossing films of all-time. Unsurprisingly, they are all incidentally part of the Avengers franchise as well.

Although he has predominantly made a name for himself playing a battle axe-wielding God of Thunder, there is more to Hemsworth than his super heroic exploits on the big screen. Still, one can’t help but be in awe of the 6ft 3in, actor the moment he greets you brandishing his signature smile before immediately lighting up the room with his electrifying personality.

The last time August Man featured Hemsworth on the cover, was in May 2016. Admittedly, a lot has happened since that time for the actor. In addition to starring in the two Avengers sequels and a third Thor film, Hemsworth has also lent his talents to the war drama 12 Strong, neo-noir thriller Bad Times at the El Royale and the sci-fi comedy, Men In Black: International in that relative short span of time.

Of course in between, he has also divided his time with his ambassadorial duties for brands such as Hugo Boss and TAG Heuer, who incidentally are responsible for our meeting with the Australian actor this time around in Singapore for the nation’s Formula One Grand Prix.

As far as celebrity endorsements go, it has to be said, TAG Heuer may have well found the perfect partner in Hemsworth not just based on his incredible star power but also his infectious and warm personality. It’s a brand story that’s also interesting to tell, considering how this successful partnership came together.

“I love working with TAG. I’ve had a very organic introduction and relationship with the brand, which all began from the movie Rush several years ago,” Hemsworth explains. The 2013 film directed by Ron Howard, Rush told of the epic rivalry between Formula One rivals James Hunt and Niki Lauda that dominated the sport in the 70s. Hemsworth portrayed the legendary Hunt in the critically-acclaimed film.

“Ron (Howard) gave me a watch when we were making the film and it was a TAG (Heuer),” explains Hemsworth. “They were they were one of the main sponsors of Formula One back then and that sort sparked the real fascination and interest with the brand for me.”

According to Hemsworth, after his initial introduction to the brand, courtesy of the Oscar-winning director, he went out himself and bought a bunch of watches, which the brand soon found out about. “I think they went – ‘he actually paid for them? He actually likes them!’ Hey, he might be a good person to have on the team I guess,” he says with a laugh. “You could say I bought my way in with the brand!”

“‘He actually paid for them? He actually likes them!’ Hey, he might be a good person to have on the team. You could say I bought my way in with the brand!”
Chris Hemsworth

His love for TAG Heuer watches notwithstanding, Hemsworth has a particular liking for the Carrera. “I love the look of the dial and the design of the face and the way it’s dressed up. Its sporty, I could surf with it, train with it. It can cop a beating and still keeps on ticking, and I like that.”

And time is something that Hemsworth is truly appreciating at the moment following his short ‘break’ from acting.

“This little downtime has been awesome; it’s pretty relaxing and nice. It’s been great just to be home with the family, to be with the kids and not constantly checking my phone and running on a schedule,” he enthuses. “After Avengers (Endgame), it was just an opportunity for me to decompress to be honest, because it was a strange come down after that film.”

Hemsworth likened that film, which incidentally marked the culmination of the first 10 years and 22 films that formed the Marvel Cinematic Universe, to that of finishing high school. “There’s a bit of a bittersweet quality to it to be honest. A strange nostalgia, if you will. I think for the most part, is that we didn’t know when we were going to see each other again, or work together again, I think.”

But Hemsworth shouldn’t be too worried about reuniting with his fellow stars from the MCU, especially with Marvel Studios and Disney eager to capitalise on the fandom surrounding their lucrative superhero universe. Several new films that will help shape the Marvel Cinematic Universe for the foreseeable future have already been greenlit by the studio. And there’s also an exciting extension of the MCU being planned already for the Disney+ streaming service, scheduled to be launched later this year.

For Hemsworth, his first big project back will also see him return to familiar grounds of the MCU, in the fourth instalment of the franchise in Thor: Love and Thunder, which is scheduled for release in late 2021.

“If all goes according to plan, we’ll start production on Thor 4 next August,” he reveals. “But I think I’ll try to do something before that, although I haven’t found that project yet. I’m still looking for that one.”

But needless to say, for an actor with the star power and presence that Hemsworth possesses, there’s no doubt he is in a good position to cherry pick his projects both within and outside the superhero-verse. There’s a good chance he may even step into the squared circle to play another larger than life character in a biopic centred on pro-wrestling legend, Hulk Hogan as well.

“Yeah, Todd Philips and I have been talking about that one for a couple of years now and it is out there at the moment being worked on,” he elaborates “I haven’t seen the script yet but Todd has every opportunity at his fingertips now following the success of the Joker. I would love to work with him and very fascinated to see what story we’ll get to tell with Hulk.”

For fans of Hemsworth, they’ll get to see him in action first in the Netflix action drama, Dhaka, which has just wrapped production. He also has a role in the comedy film, Jay and Silent Bob Reboot, scheduled for release later this year. Despite being on a break, it seems that the actor leads a rather busy and hectic life, which begs the question if the actor is ever in danger of cracking under pressure.

“Yes, my kids make crack actually,” he says with a laugh. “It’s a lot of pressure to be honest, I’ve got three kids, they’re wonderful but they really know how to test you. They know which buttons to push and every day is a learning curve for me. It can become a very steep hill to climb sometimes, to be honest, but it’s all worth it.”