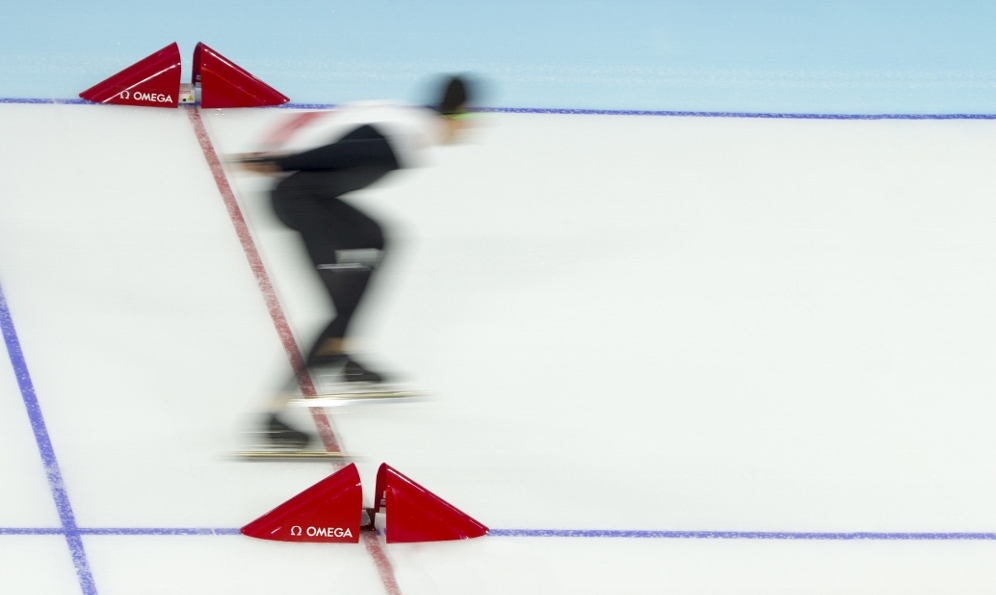 Most Beautiful Olympic Stadiums And Venues Ever Built
CultureRead More
Survey Notes A Surge In Online Incivility During The Pandemic
GearRead More
Interesting Facts About The History Of The Olympics And Its Traditions
CultureRead More
Some Of The Most Stylish National Team Kits From The 2020 Tokyo Olympics
StyleRead More
What's up in the world of fashion, jewellery and watches? Sign up to receive it all.

In 1988, the Olympic Games arrived in Seoul, where the best athletes performed on the world’s greatest stage. Today, 30 years on, the global sporting event is back in South Korea. This time, it’s the Winter Olympics, in Pyeongchang. While the sports and climate are different, Omega is more than poised to maintain precision in the face of cold, thanks to an on-going history of excellence as the multi-sport event’s official timekeeper.

Omega first served at the Winter Olympics in 1936, in Garmisch-Partenkirchen, Germany. For that occasion, a single technician was sent with just 27 Omega stopwatches used to time every second. Over the past 82 years since then, Omega has continued to develop its technology and hone its expertise. Today, the watch manufacture has an unrivalled reputation in timekeeping.

For the 28th time in history, Omega is fulfilling its role at the Olympics. From 9 to 25 February 2018, the official timekeeper will be moving in on Pyeongchang with 300 timekeepers, supported by 350 trained volunteers, 230 tons of equipment, including 30 public and 90 sports scoreboards, and many kilometres of cables and optical fibre, capturing the best performances and finest moments in the history of sports. Following this is the 2018 Paralympics in Pyeongchang.

Prior to this, we wrote about Omega’s technical evolution over 80 years and more at the Olympics (click and read The Olympics and Omega). Here, we delve into Omega’s latest updates to its technology, sport by sport.

At Pyeongchang 2018, through incredible sensor systems, Omega now provides continuous measurements from start to finish of events, meaning that athletes can gain an immediate understanding of where they gained or lost time, or where they won or lost points.

From the live speed of a single alpine skier – to the formations of an entire ice hockey team – the information provided by Omega will add a brand new dimension to every performance. Additionally, this information will mean that people in the venues, as well as those at home watching on television, can have a far greater understanding of each sport as it happens.

Everything in 2018 is about enhancing the viewer experience and providing live information that athletes can use to analyse their performances. This is the first time at the Olympic Games that such in-depth data will be made instantly available.

In South Korea, Omega uses its new “Stromotion” technology to break down the action into sections and take a closer look. Trajectory video footage now neatly reveals the evolution of an athlete’s movement or technique to show you exactly how good it was. Other events in which stromotion will be used include alpine skiing, figure skating, aerial events and halfpipe.

Omega’s Simulcam helps to enhance the replay action of numerous events in Pyeongchang. By laying an image of one competitor over another, it has become possible for replays to compare the techniques and performances of different teams. Events in which you might see Simulcam used include alpine skiing, bobsleigh, skeleton, luge, ski jumping and Nordic combined.

To give viewers a clear idea of the courses and venue layouts, Omega now provides course maps and animation, layered with virtual graphics and information.

Measurements now includes things such as acceleration and brake. But firstly, the athlete’s speed can be shown live as they start the run, and can constantly update at various intermediate points. Alongside this, the speed can also be compared to the fastest athlete at the same point. At the end of the run, Omega can provide an in-depth run analysis that broadcasters can use to compare athletes with each other. In addition to this, systems such as Stromotion and Simulcam becomes invaluable for knowing exactly where a competitor won or lost time.

With the new Positioning System, Omega can track the live position of the athletes in both Cross Country and Nordic events. Information is displayed for single competitors or groups, and is able to show distances to the finish, speed, and times between groups. When a single athlete is shown on screen, it will also be possible for the system to compare their performance with the current leader. Finally, an innovative gradient chart is available to pinpoint an athlete’s position on the course inclines and also compare them with others.

A fast-paced sport, speed skating is even more enthralling for those watching. In individual events, except for Mass Start, live speeds are now shown on screen. In comparison to the current overall leader’s time, it is also possible to show live delta, giving viewers a unique understanding of how each competitor is progressing. Omega now also shows live positioning of each athlete or team on the oval. By pinpointing these positions, it will be clear to see who is gaining an advantage. A line to beat can also be shown live on the ice, indicating the distance that an athlete needs to make up to come first.

Sensors inside each bobsleigh are able to measure various factors including G force, angle, trajectory and accelera­tion that will enable teams to understand where they won or lost time on the track. Primarily, as the team tears downhill, repeater antennas placed along the track will transmit the bob’s live speed. On television, this data can be shown as a white line on a meter, with a green tip to indicate the highest speed achieved by the current sled. Once the sled starts to decelerate, the best speed achieved is displayed. In bobsleigh, skeleton and luge, the Sled Path system provided by Omega also helps to compare the performances between different teams. The current sled is always shown in red, while the path of the current leader is shown in blue. With this method, it will be possible to see the different techniques of each team.

Freestyle and Snowboard – Half Pipe

Half pipe is action packed, with many criteria all taken into consideration when scoring. The display that viewers will see on screen now includes each competitor’s highest jump as well as their average jump height. This information is shown after each run has finished. The system even captures the number of rotations in a certain jump.

Connected to the main motion sensor data, Omega’s ice hockey analytical tool will also provide an exciting visual representation of what just happened on the ice. During replays and game analysis, it can highlight players and the puck, track athlete and puck movement, show the speed of individual athletes, show time on ice, measure distances between players and display team formations.

When jumping from great heights, every­thing has to come together perfectly for the competitor. At Pyeongchang 2018, Omega will be able to provide valuable competition-relevant data for athletes and will allow spectators to zone right in on the finest details. “In-run” speed is one of the primary factors that might interest viewers, and this is now displayed for each jump. Then, as they hit the jump, the display changes to show the “take-off” speed. “At 20m” of their jump, a mid-air speed is shown, while also highlighting how much faster, similar or slower it is compared to their “take-off” speed. Finally, a “landing speed” is instantly calculated and displayed. A virtual line is displayed across the landing zone during live coverage to show the current distance to beat.

Created to mark the Olympic Winter Games 2018, the Seamaster Planet Ocean “Pyeongchang 2018” is guaranteed to perform with world-class precision long after the great event. Limited to 2,018 pieces, it is not only an aesthetically striking timepiece in bold blue and red (the colours of the Korean flag), but also a technological marvel. Cased in stainless steel, it features a polished blue ceramic dial with indexes, hour and seconds coated with white Super-LumiNova that emits a blue glow. The minute hand, in line with the dot on the bezel, emits a green glow.

The unidirectional rotating diving bezel is very special indeed. It features the world’s first polished blue ceramic ring with rubber and Omega Liquidmetal diving scale, with red rubber for the first 15 minutes. The new alveol-patterned screw-in caseback is engraved in blue with the words “Planet Ocean” and “Limited Edition”, as well as the watch’s limited edition number. Transferred to the caseback’s sapphire crystal are the words “Pyeongchang 2018” and the Olympic Winter Games logo. Beating at the heart is the Omega Co-Axial Master Chronometer Calibre 8900. As a Master Chronometer, the watch has passed the highest level of watch testing in the industry, having endured 8 rigorous tests over 10 days, set down by the Swiss Federal Institute of Metrology (METAS).