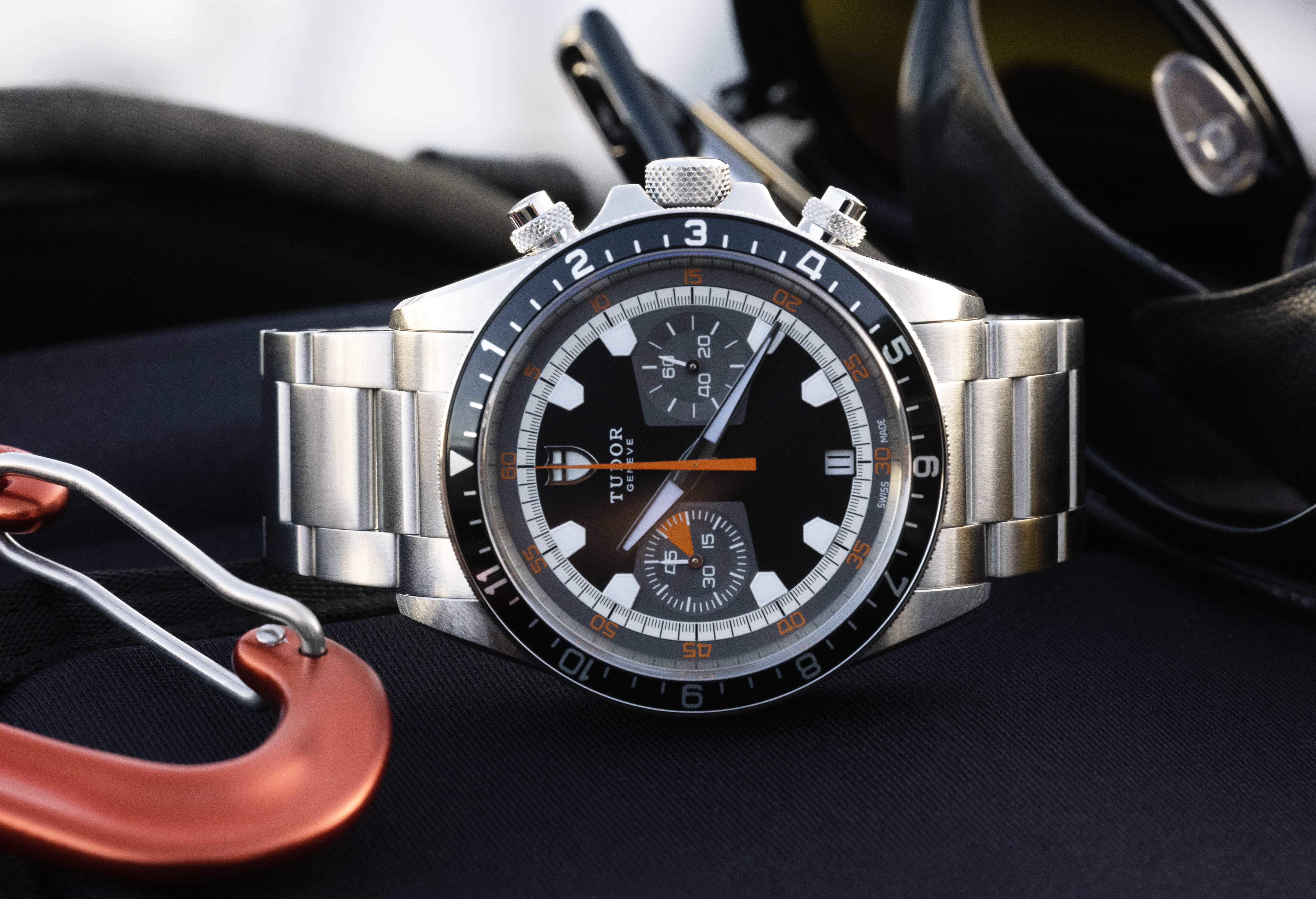 The Timepiece That Paved The Way For Tudor Chronographs Since 1970

In the formative years of Tudor, much of its innovation centred on Rolex founder Hans Wildorf’s philosophy of “making a watch that our agents could sell at a more modest price than our Rolex watches, and yet one that would attain the standard of dependability for which Rolex is famous.”

In the 1940s, with the launch of the Tudor Oyster collection, the younger sister brand to Rolex successfully incorporated the waterproof Oyster case in its production and began a legacy of diving models and tool watches. Encouraged by warm patronage of naval forces, this, along with the adoption of the self-winding rotor, led to the creation of Tudor’s first diving watch Submariner in the 1950s and the institution of the brand’s signature “snowflake” hands.

It was in 1970 that Tudor, with the launch of its first chronograph, the Oysterdate, immediately impressed aficionados through its exceptional use of bright colours and characteristic pentagonal hour markers and became associated with mechanical sports watches. Powered by a robust mechanical Valjoux calibre with manual winding and cam chronograph mechanism, the design featured a generously proportioned case in sharp and masculine style. The growth of the Oysterdate has since continued in the form of successive series. Today, as tribute to the 50th year of the Oysterdate, we take a trip down memory lane and look back on its eventful journey.

There were three variations of this first sporty Tudor chronograph, each distinguished by their bezel type. Reference 7031 featured a bezel topped by a Plexiglas disc with a 500- unit graduated tachymetric scale, used in particular to calculate average hourly speeds between two points. Reference 7032 featured a satin-brushed steel bezel, also engraved with a 500-unit tachymetric scale. Finally, reference 7033 had a bidirectional rotating bezel with a 12-unit graduated black disc in anodised aluminium. This model never went beyond prototype stage. The dials on these first three references came in two variations, grey and black. They also featured unusual painted luminous hour markers in a pentagonal shape, earning them the nickname “Homeplate” in reference to the home plate on a baseball field. Finally, the chronograph’s minute counter has 45-minute graduations, a rarer version than the more common 30-minute variant.

The second generation of Tudor chronographs was launched in 1971. Dubbed the Tudor “Monte-Carlo” thanks to their roulette wheelstyle dials, the 7100 series was equipped with a new movement that offered a more sophisticated chronograph mechanism, with clutch and column wheel. The series also introduced a new colour combination: Tudor’s signature blue, with a blue and grey dial and two types of matching blue bezel. This new series consisted of three chronographs: reference 7149/0, with its Plexiglas bezel and tachymetric scale graduated up to 500 units per hour; reference 7159/0, with its satin-brushed steel bezel and engraved tachymetric scale; and reference 7169/0 became the now mass-produced incarnation of the 7033/0 prototype with rotating bezel.

In 1976, Tudor presented a new product family that represented a small revolution for the brand. These new Prince Oysterdate watches were the first Tudor chronographs to be equipped with self-winding movements. While the case retained the general lines of the previous families, it was made thicker to accommodate the rotor of the self-winding movement, earning it the nickname “Big Block” in collectors’ circles. The name “Big Block” endured when the following 79100 series was introduced in 1989, which underwent only minimal modifications. Like the previous generations, the 9400 series consisted of three references, each distinguished by their bezel type, a feature also present in the “Big Blocks” of the 79100 series. Similarly, several dial variations were available. These featured two aesthetic trends, one freely inspired by the spirit of the dials of the two previous series, the other highlighting the strong contrast between dial and counter with black and white or silver and white combinations. The architecture of the new movement required a reorganisation of the dial with the addition of an hour counter, with the counter group shifting left and the date aperture to 3 o’clock.

RETURN OF THE “HOMEPLATE”

In 2010, to mark the 40th anniversary of the Oysterdate, Tudor launched the Heritage Chrono. This watch featured a modern design, while adopting the main aesthetic elements of a prototype from 1970 with hourly graduated rotating bezel, blending them with numerous subtle, unique details such as the bevelled, polished angles of the horns, the polished protective shoulder of the winding crown, and the knurling on the rotating bezel and pushers. Two different dials, inspired by the options available in 1970, were offered with this new model: grey with black sub-counters or black with grey sub-counters. While the pentagonal hour markers or “Homeplates” were originally painted, the 2010 version had affixed hour markers in the same shape, a refined touch that created increased depth in the dial display. As an additional detail, TUDOR offered a black, grey or orange Jacquard fabric strap with this model, a first for the time, which went on to inspire the industry as a whole.

In 2013, TUDOR surprised the watchmaking world with the launch of the Fastrider Black Shield, a resolutely sporty matt black chronograph that broke away from the brand’s traditional aesthetics. Its monobloc high-tech ceramic case reflected its technological prowess HIGHLIGHT and performance. Angular and detailed, it resembled the fairing of a Superbike. Its production process involved high-temperature injection and was the result of high-level technical expertise, boasting a unique performance for a watch in this price bracket.

A MANUFACTURE CALIBRE FOR THE BLACK BAY CHRONOGRAPH

In 2017, the Black Bay Chrono boldly combined the aquatic heritage of the Black Bay family with the chronograph’s timekeeping function that ruled the racetrack. The result was the Black Bay Chrono, a chronograph with superior performance and a unique design. Boasting a 70-hour power reserve and silicon balance spring, and officially certified by the Swiss Official Chronometer Testing Institute, the Manufacture calibre behind the Heritage Black Bay Chrono was a highperformance movement, designed in the purest watchmaking tradition, with column wheel mechanism and vertical clutch. It presented extraordinary robustness and reliability, guaranteed by an array of extreme tests. Derived from the Manufacture calibre Breitling 01, with a high-precision regulating organ developed by Tudor, this movement was the result of a recent collaboration between the two brands, which now pool their expertise in the design and production of certain mechanical movements.