Zenith On The Cutting Edge Of Watchmaking With The Defy Collection 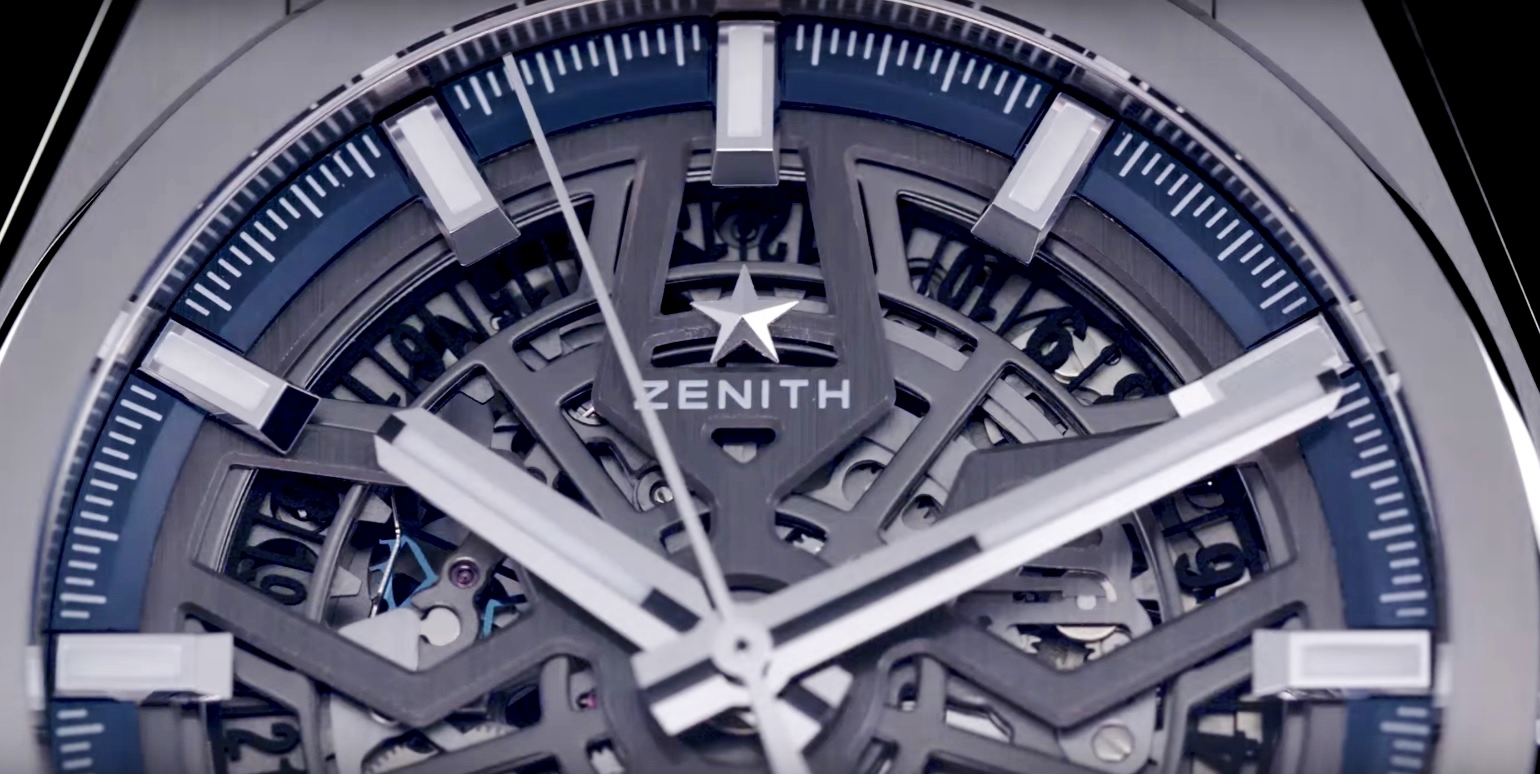 In 2017, Zenith wrote the first chapter of tomorrow’s watchmaking, with the launch of Defy El Primero 21 – the exceptional hundredth-of-a-second chronograph – and the first-generation Defy Lab, the world’s most accurate watch thanks to its new mono-crystalline silicon oscillator. The two Defy pieces with its progressive DNA has today given rise to to a full-fledged collection featuring several degrees of mechanical complexity, starting with the new Defy Classic. Here’s our complete guide to all the Defy pieces that have been launched thus far.

In 1969, Zenith launched El Primero, the first ever fully integrated automatic column-wheel chronograph movement, enabling 1/10th of a second precision, a feat that had never been surpassed – until last year, when Zenith defied tradition, pushed all boundaries and delivered 1/100th of a second accuracy in the form of Defy El Primero 21, the 21st-century symbol of a new future for the over 150-year-old brand.

The newly upgraded movement boasts a frequency of 360,000VpH, ten times more than its El Primero predecessor, thanks to its double-chain structure, which allows the central hand to sweep at a lightning speed of one turn per second. Together with the inner bezel bearing a scale graduating from 1 to 100, this offers a surreal time-travelling experience.

The design of the TIME LAB-chronometer certified watch draws inspiration from the rugged good looks of the 1969 predecessor. Framed by a 44mm brushed titanium case, the openworked dial offers a resolutely contemporary background for the key features of the original models: star-tipped sweep-seconds hand, large luminescent baton-type hands and facetted hour-markers, and Compax-style chronograph counters, now in skeleton style, with a distinctively blue 30-minute counter at 3 o’clock.

Today, the Defy El Primero 21 comes in a variety of material choices and colour accents. These include an 18k rose gold model for a more stately look, with matching rose gold bracelet or brown alligator strap lined with rubber; a titanium version featuring a striking blue main plate with matching blue strap in supple leather or alligator for that extra sporty touch; and a black ceramic version that exudes a sense of mystery and defiance, with matching black ceramic bracelet or black rubber strap, all of which are endowed with a generous 50-hour power reserve and 100m of water-resistance.

In 1675, the Dutch astronomer, mathematician and physicist Christiaan Huygens demonstrated the principle of regulating time by means of a coupled balance and spring fitted inside a clock, a concept that still forms the basis of all current mechanical watches. In 2017, a new scientific endeavour conducted at the Science Institute LVMH, the parent company of Zenith, challenged the sprung balance principle invented by Huygens, and introduced the Defy Lab, equipped with the all-new, ground-breaking Zenith Oscillator – a monolithic silicon-based regulating organ without mechanical linkages measuring just 0.5mm thick that replaces the 30 or so ordinarily assembled, adjusted, regulated and controlled parts.

The absence of conventional mechanical couplings in this system eliminates contact, friction, wear, slack, lubrication, assemblies and dispersions. No more contact means no more friction or wear, and thus no need for lubrication. Insensitivity to temperature gradients, gravity and magnetic fields eliminates the key weaknesses of the current balance-and-spring assemblies that are subject to deformation and/or dilatation, thereby leading to diminished precision.

The breath-taking development beats at the incredible frequency of 108,000vph, with an amplitude of +/-6 degrees, and is endowed with an almost 60-hour power reserve – more than 10% more than that of the El Primero. This frequency also provides the watch with an exceptional – almost 10 times higher – degree of accuracy. Its mean daily rate is precise to within just 0.3 seconds. (The average daily rate for COSC “chronometer” certification ranges from -4 seconds to +6 seconds)

In addition, Defy Lab marks the first watch with a case (44mm in diameter) made of Aeronith, the world’s lightest aluminium composite material. This new material resembling an extremely solid metal foam features a density of just 1.6 kg/dm3, which is 2.7 times lighter than titanium, 1.7 times lighter than aluminium and 10% lighter than carbon fibre. Like all major innovations, only 10 pieces of Defy Lab have been produced and pre-sold to collectors. Serial production is the next goal towards which the in-house teams are already working, notably with a view to creating a different and original design.

Designed in the characteristic style of the Defy collection – elegant, sporty, with a futuristic undertone – is this simple yet highly technical three-hand plus date model in 41mm brushed titanium. The openworked dial features large luminescent baton-type hour and minute hands, and a slim seconds hand with an emblematic star counterweight, sweeping over five stylised branches that also evoke the Zenith symbol.

Powering the watch with unwavering precision is the famous automatic Elite 670 base calibre, reinterpreted, for the first time, with a silicon pallet-lever and escape-wheel. The watch comes fitted with a titanium bracelet, an alligator strap lined with rubber, or a black rubber strap. For fans of contemporary classicism, this chic and urban must-have also comes in a blue sunburst closed dial version with 3 o’clock date window.

Defying the laws of gravity, the new Defy Zero G heralds the dawn of haute horlogerie’s future, with a cleverly downsized and fine-tuned “Gravity Control” gyroscopic module, which was first devised in the early 21st century, as part of its quest for ultimate precision. The Zenith-patented gyroscopic module cancelled the effects of gravity by maintaining the regulating organ and balance wheel in a horizontal position. In an additional feat, it was fitted in the high oscillation-frequency El Primero movement measuring tenths of a second.

Optimised for the new Defy Zero G, this spherical system, inspired by historical marine chronometers that previously spun between two convex sapphire crystals, now occupies only 30% of its initial volume and thus fits perfectly between the two flat sapphire crystals of the Defy case, appearing in all its majesty at 6 o’clock. The heart of the new Defy Zero G beats to the fierce pace of the manual-winding El Primero 8812S calibre, heir to the historic 1969 El Primero, oscillating at 5Hz and self-regulated by the modernised “Gravity Control” module. It drives the offset hours and minutes, small seconds and gravity control functions, along with the over 50-hour power-reserve indicator.

Exuding a modern, stylised design, the grand complication is visible on both sides. The entirely skeletonised and black rhodium-treated movement makes a striking contrast with the light tone of the five slim branches evoking the Zenith star symbol. They match the case material and accentuate the 3D effect of the dynamic architecture. The symmetrically arranged openwork small-seconds and power-reserve counters – respectively appearing at 10 o’clock and 2 o’clock – are swept over by slim hands. Forged from pink gold or titanium, the 44mm case is water-resistant to 100m and sits handsomely on a man’s wrist with a new integrated bracelet in the same metal with brushed and polished links, or an alligator strap lined with rubber.