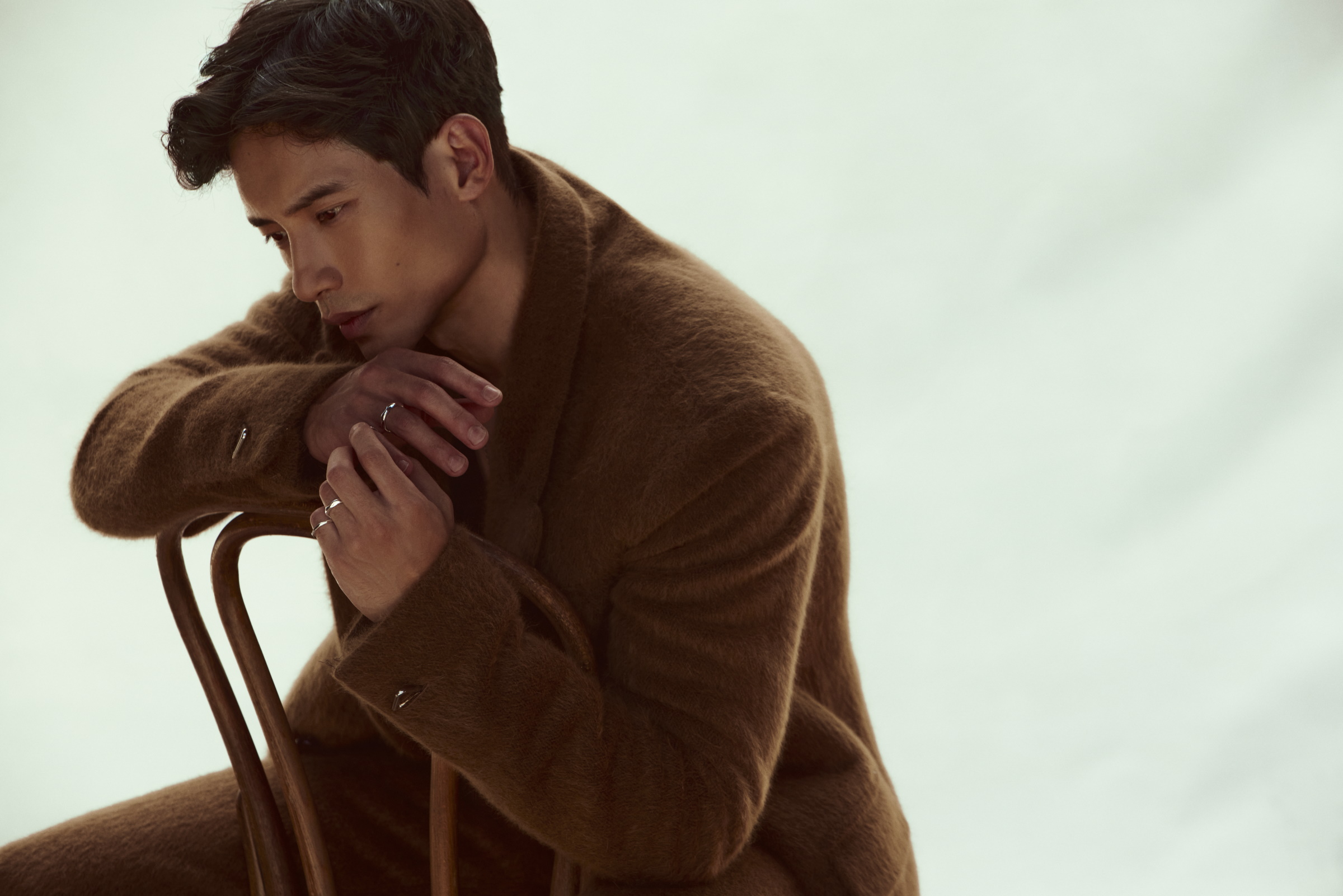 The World Is A Good Place With Manny Jacinto

It has been more than five years since Manny Jacinto first appeared on our television screens as Jason Mendoza in the critically acclaimed series, The Good Place. With Jason, Jacinto succeeded in subverting the usual Asian stereotypes while also making hearts swoon.

The role made him akin to an Asian Ken-doll with the mentality of a teenager ‒ naive and ever-so blithe. In propria persona however, the Filipino-Canadian actor is quite the opposite. The actor is confident, charismatic, and genuinely amiable.

There is more to the actor ‒ who migrated to Canada from the Philippines at age three ‒ than meets the eye. His chiselled jawline pales in comparison to his personality and his convictions in life. Manny Jacinto has been working hard through the global pandemic, while simultaneously being an activist for sociocultural issues and climate change.

With a strong desire for achievement and growth, Jacinto continues to challenge and cultivate himself by assuming new roles even though it would be convenient to continue playing fan-favourite characters such as Jason Mendoza. And despite his successes and booming popularity, he remains unassuming and deferential, self-assured but never haughty

What propelled you to venture into show business?

Before venturing into acting, I was a dancer. The need to improve my performance on stage prompted me to take up an acting class. Since that first class, I caught the bug, and my love for acting started to snowball. While dancing is an amazing medium for me to communicate my feelings, I find it more liberating to express myself through my body and voice with acting.

As an Asian who has assumed many leading roles in well-loved TV series, how do you feel about the lack of onscreen Asian representation?

It is still an uphill battle, not just for Asian representation but for all people of colour. But it is slowly getting better. That said, I do feel very fortunate to be in the industry during this specific time. It feels like some sort of revolution is happening.

Do you have any advice for aspiring Asian actors?

Create your own work. Don’t depend on others to create your story or the stories you want to see on screen.

Have you faced many insecurities? How do you overcome them?

Too many to count. My insecure thoughts tend to come and go. I don’t think they will ever go away completely. My battle right now is to recognise these insecurities, figure out where they come from and remind myself that they don’t dictate who I am or who I want to be.

With moral philosophy at the forefront of the narrative for The Good Place, do you think you’ve learnt anything during production? Have you brought any of these ethics into your personal life?

The most important lesson I’ve learnt and have tried to adopt is the idea of being a selfless person. My definition of being selfless is to do good without seeking reward. I try to apply this principle in all aspects of my life.

You are an activist for social justice, racial equality, and climate change. Has your celebrity status helped further your advocacies?

If anything, having a platform really helps to spread the word for anything you are fighting for or advocating. But what I have found most comforting is the support from the public and the feeling that you are not alone in the fight.

You protested with Jane Fonda back in 2019. Do you find it disappointing that there’s so much inaction?

Absolutely. But if there is one person to get people to take action, it’s Jane Fonda.

I do feel like Jason Mendoza subverted some of the Asian American male stereotypes. He wasn’t the model minority. He doesn’t come off as effeminate, and he doesn’t know karate (though he probably thinks he does).

Do you have to deal with stereotyping when you go for auditions?

I do deal with stereotypes and Asian tropes at auditions. And I do tend to pass on them. But I’m always cognisant that there are plenty of smart Asians out there. These types of roles can still be interesting as long as the characters have layers, are fleshed out properly, and have truly something to say.

Jason was originally in the Bad Place before he found inner peace and showed virtue. How do you define a good person and, who do you think deserves a spot in the Bad Place?

Going back to the notion of being selfless, I do feel like the good people out there are the ones that aim to help and do good without seeking a reward in return. Regarding the latter question, (laughs) I shouldn’t say. I’ll tell you after the interview.

Despite the conclusion of The Good Place earlier last year, Jason Mendoza has continued to win the hearts of many. As a fan-favourite, did you have a hard time bidding goodbye to the character?

Would you assume similar roles in the future?

Yes, definitely. Jason will always be a part of me. As of right now, I’m trying to navigate through different types of characters and cultivating new personas. But I wouldn’t mind revisiting Jason Mendoza 10, actually, make that 20 years down the road.

Let’s talk more about your recent project, Nine Perfect Strangers. The show was filmed right in the middle of the global pandemic. Did you face many difficulties during production?

We had to do a 14-day quarantine in Sydney, Australia. But to be honest, life was pretty normal during that whole time, especially where we were filming in Byron Bay. We were very lucky.

The series is an adaptation of a 2018 novel of the same name by Liane Moriarty. How different is the series from the book?

(laughs) I don’t want to give away any spoilers, so you’re going to have to watch to find out.

What about the role of Yao intrigued you and made you want to play him?

Yao was a far departure from what I’ve previously played. I also identified with his unwavering loyalty, tunnel vision, and stubbornness when it comes to something he is passionate about.

Surrounded by cynical and sensitive individuals, how does Yao deflect the negative energy?

If anything, he tries to take in the negative energy to transform it into something positive. He’s like an air conditioning unit (laughs). Take in the hot air and convert it into cool air.

What is Yao’s relationship with the guests? Does he have any love interests in the show?

Yao empathises with all the guests. He can see parts of himself in every one of them, insecurities, and all. He knows what they’re going through and he is there to help them on their journey to self-betterment. Regarding love interests, you will have to watch the show to find out.

If you could name one, what is your favourite scene?

One of my favourite scenes was this waterfall scene with Michael Shannon and Asher Keddie. None of it was CGI; we were literally at the top edge of a glorious waterfall.

You hopped onto this project a few months after wrapping up Brand New Cherry Flavour and The Good Place. Your roles in these series are a stark contrast from one another. Did you have a hard time adjusting to new personas and characters?

I had a lot of fun exploring different characters despite the difficulty. It can be tough, and a lot of effort definitely goes into it, but it’s such a joy.

You were working alongside some of Hollywood big names, Nicole Kidman, Melissa McCarthy, and the comedy queen Regina Hall. What would you say is your biggest takeaway from working with them?

We’re all just big kids. Working with all these veterans, I’ve noticed two things. They’re genuinely kind people, and they have yet to grow up. A strong sense of play and curiosity is always present in their work and how they live their lives.

What is the one thing you hope the audience would take away from the show?

If anyone watching takes even just a brief moment to self-reflect by the end of the show, then all of the work and effort we have invested into this project would have been worth it.

What’s up next for you?

I recently wrapped a romantic comedy called I Want You Back, which will be coming out sometime next year, along with the Top Gun sequel Top Gun: Maverick, where I will play one of the younger pilots.