6 Questions with the Cast and Creative of 'Ola Bola The Musical' - Augustman
Sort & Filter
Close Filter
Sort By
Date
Relevance
Filter By Category
All Categories
All
Style
Culture
Gear
Food & Drink
Travel
Wellness
AM Select
Apply
Filter By Location
singapore
All Countries
Culture
Shattered Faith. Broken Alliances.
Culture
The Tokyo Olympics Will Be Held This Summer But Some In Japan Aren’t Too Keen On It
Culture
Legendary Songwriters Are Selling Off Their Song Catalogues. Here’s Why
Culture 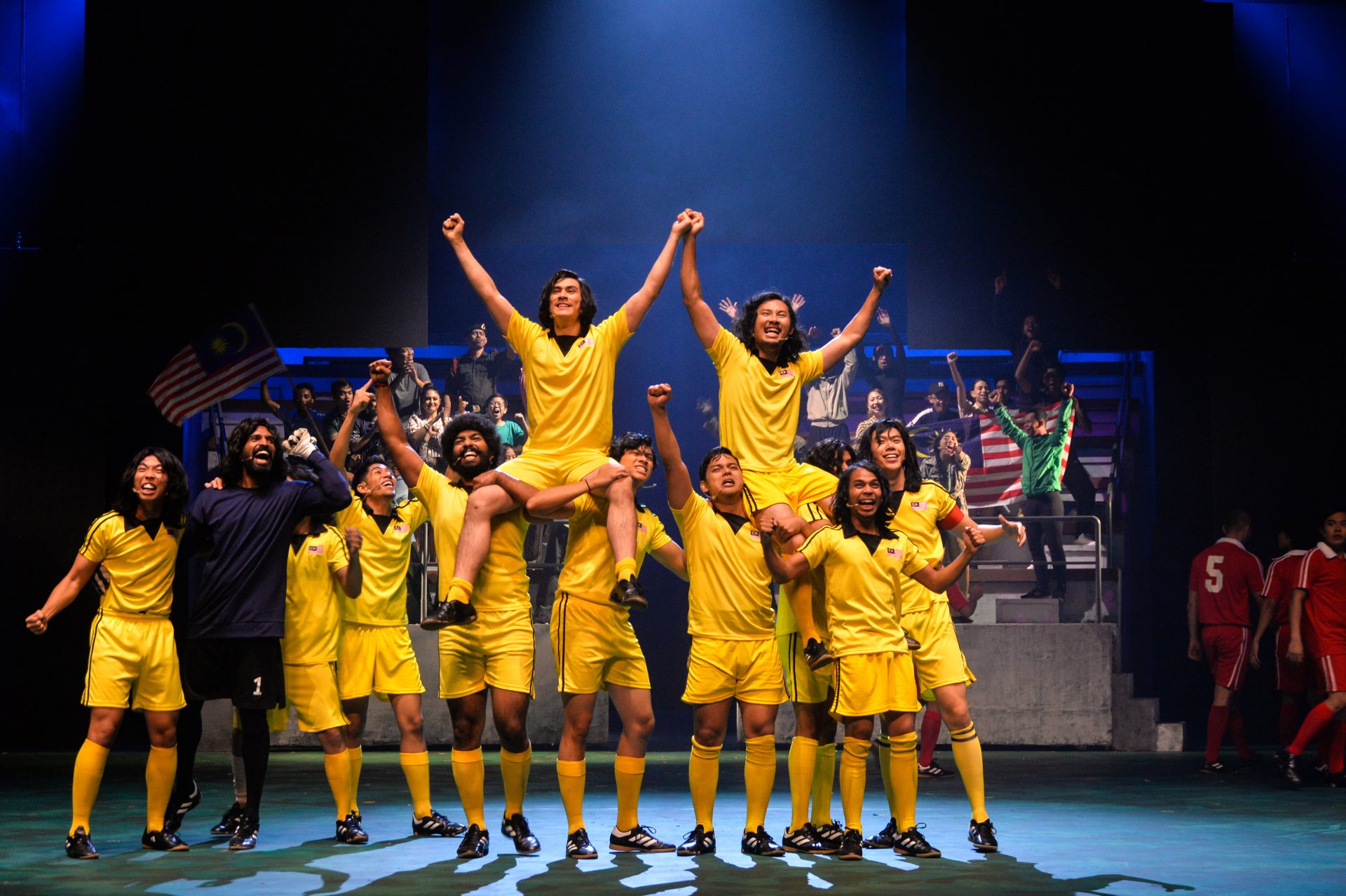 It was the best of times; it was the worst of times, as Charles Dickens once wrote.

It was a time when the Malaysia national football team (known affectionately to the locals as ‘Harimau Malaya’) was given a second chance at the Olympics, after the close call in the 1972 Olympics; yet a time when the world was at arms, and Malaysia was one of the 66 countries that boycotted the year’s Olympics in Moscow, in protest of the Soviet Union’s Afghanistan invasion, and thus – spoiler alert – forfeiting their qualification.

That generation’s most pivotal historical events in Malaysia was translated into film in 2016, when Chiu Keng Guan took up the directorship for Ola Bola, inspired by the events leading up to the 1980 Olympics. This year, Malaysia’s creative industry gives the much talked about Malaysian event a second go, in the form of a musical, which has been showcasing in Istana Budaya since February 8, and will continue till March 11, under Enfiniti Production, the performing arts production company responsible for past shows, such as P Ramlee The Musical and Puteri Gunung Ledang: The Musical.

We speak to the important people behind Ola Bola The Musical: Iedil Putra as the aspiring sports commentator Rahman (based on renowned ’50s TV personality Rahim Razali); Stephen Rahman-Hughes as the stern Coach Harry Mountain (mirrored after the late Karl-Heinz Weigang), who is also the Special Movement Choreographer for the musical; Altimet as Sergeant Ahmad, a fictional portrayal of Hassan Sani; and Musical Director Saiful Ridzuan a.k.a Duan of SevenCollar T-Shirt – the people who are making Malaysian history in their own little ways, this time, in the musical/theatre front. The people who are hopefully defining a moment for us that when we look back 40 years from now, it is just “the best of times”, period.

Tell us a bit about the character you are playing, and what do you hope to bring to the table besides the portrayal on film done by the other actors?
Stephen: I actually grew up playing football, and I watched interviews and several videos of football coaches, such as Alex Ferguson, Jose Mourinhi and Jurgen Klopp, and how they’ve commanded respect from their team; I remember those moments of someone to trying pass on strategic information and knowledge to their team. I still want to keep the quality that Coach Harry (played by Mark Williams in the film adaptation) is a no-nonsense coach. Coach Harry comes off very harsh at first, but I also have to think about how he would win the players over. I tries to build an image of him so that I could relate to how Coach Harry would act, being introduced to a team that’s initially quite resistant. He would have to have a level of success to coach any team on a national level. I had to think of the qualities that has earned his title as a well-respected manager and mentor by the end of the show.
Altimet: I play the role of Sergeant Ahmad, played by Muhd Luqman Hafidz bin Mohd Fauzi in the film two years prior. He is attached with the Malaysian Armed Forces and is brought in to help the team train as a unit. We worked on a little back story for this character: he is actually a Harimau Malaya fan, and the reason he agreed to help the team was because he himself was disappointed in their performance and wanted to see them succeed. So, he did what he does best and trains them to move as a unit and finally, work as a team.
I: I’m playing the role of Rahman, which Bront Palarae nailed in the film. Rahman wants to be a sports commentator, but he starts of with a very junior position yet has big dreams to be the sports commentator for the Harimau Malaya team. The musical shows his journey from being just a dreamer to him finally achieving his dream. Bront Palarae portrayed the role of Rahman so well in the film that he became one of the highlights of the film, but I wanted to try something different. Since this was a musical, I decided to bring in my own nuances and style and own take on the character.

What was it that inspired the idea to do a musical version of Ola Bola?
Stephen: I came on board because I was very excited about doing something different with a musical. Not a lot of people know this, but I actually come from a choreography background, and have won several awards for it. This is a chance to finally revisit that creative side of me. The idea of taking a football match onto the stage was both exciting and challenging. I had to think of a way to elevate the image of the game, and how to keep the audience interested in watching. There were so many football sequences in the musical and I had to figure out how to conceptualise each football moment. Our director, Tiara Jacquelina, trusted me to try different ideas and concepts using my contemporary dance and hip hop background to invent movements that would work for this musical, and I also relied on my musical theatre background to drive the movement emotionally. But of course, my resume would have been all for naught without the amazing team behind me to bring this concept to life.

What do you think Ola Bola The Musical can showcase to the public things that once were not possible in the film, and what are the shortcomings in vice versa?
Altimet: They’re two different formats that you can use to tell this momentous story. With a film, you can use close up shots and play with different elements to bring that emotion to life. With a musical, the story and the emotions are brought to life by the actors on stage and on a more personal level. This particular musical is so interactive and engaging that during our shows, we actually have the audience cheering during some of the football match scenes. It’s just a different level of emotional engagement altogether.

Tell us a bit more about the music production for the musical.
Duan: The music for Ola Bola The Musical was a collaboration between a few people. All songs were written by Mia Palencia, all lyrics by Mia and Altimet, all rap lyrics by Altimet, and all music including additional compositions, underscores, thematic variations and sound design was arranged and produced by Jason Voo and myself. The music took around four months to complete, after considering various factors, such as the performer’s abilities and scene demands. All music and sounds that you hear in the musical was carefully designed to match and amplify the message of each scene and the story as a whole.

Personally, what do you think it was about the Harimau Malaya entering the 1980 Summer Olympics that affected the nation, so much so that there is a film – and musical – made about the momentous moment close to 40 years ago?
Iedil: It was such a momentous moment because you had the whole world boycotting the Olympics. The Malaysian public didn’t even know about it until an official announcement was made. Then you had this team of football players who came from different backgrounds and were just a bunch of average men playing football for the sheer love of the sport. It was amazing how these team of different races, united for their love for football, despite knowing that they wouldn’t be playing at the Olympics, it didn’t stop them from playing their best to make their nation proud.

Do you think the current Harimau Malaya team will attain such glory for the nation again, perhaps in the upcoming Olympics in 2020 in Japan?
Iedil: I hope so. We all hope so. It will take a lot of effort to go back to the glory days. Nowadays, it’s no longer just about the sport. Players need the right development and support, both financially and emotionally. The players need to receive the support of the government and the nation in order to strive. With better development programs, our junior teams are already playing a lot better, and it just shows that the right measures go a long way. However, our football players also need to rise to the occasion to give their supporters something to believe in. They are so often the reason that Malaysians come together and unite, and hopefully it continues to remain that way.

‘Ola Bola The Musical’ is currently showcasing in Istana Budaya until March 11. Kick – we mean, click – here for more details.

Musical
local
Celeste Goh
Talk to Me About: