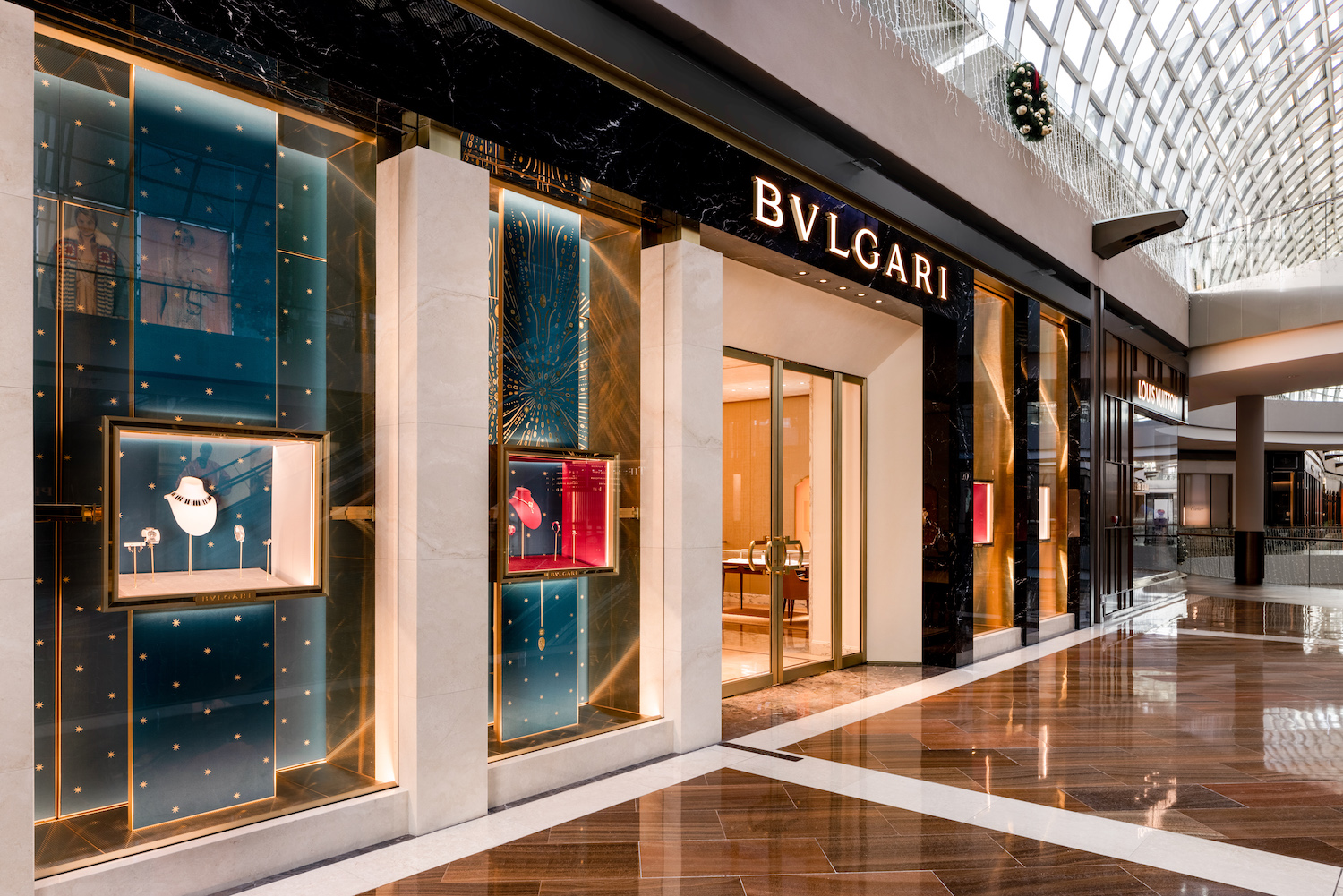 Inspired by Mediterranean origins and steeped in Roman traditions, Bvlgari, the magnificent Italian jeweller reopens their flagship boutique in Singapore’s Marina Bay Sands Shoppes. Since its launch in 1905 at the Via dei Condotti in Rome, the first House of Bvlgari has ever been the home and palace for all things beautiful and grandiose. The new Bvlgari Marina Bay Sands store façade, featuring a black Grand Antique marble portal, used in contrast with Travertino Navona square columns, recalls the glory of ancient Rome.

As the Roman Empire gained control of the riches of the known world and was exposed to the opulent, extravagant and ostentatious Hellenistic cultures of the east, Rome and its provincial cities in the West imported exotic marble from the East, used for its beauty but also the powerful ideological meanings they acquired over the years as a symbol of classic Imperial majesty, now today, transposed upon the contemporaneous settings of the red dot’s famed post-modernist casino resort. Today, transporting Rome to Singapore also means conveying the Italian dolce vita or art of living to its Marina Bay Sands Shoppes flagship, offering everything from the finest high jewellery masterpieces to Roman Aperitivo to sip in the lounge. 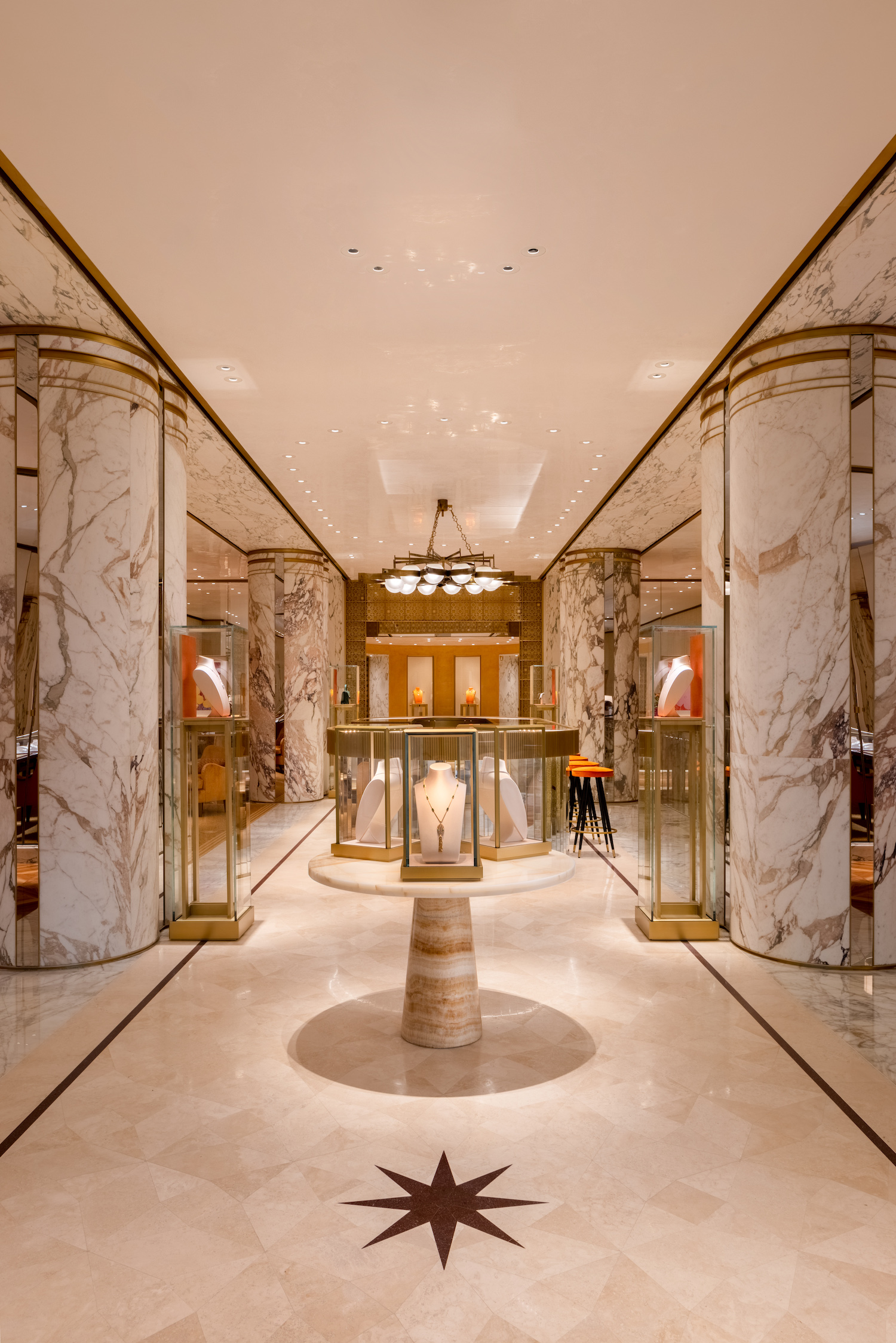 With eye-catching coloured windows personalised with the holiday season’s theme in a vibrant berry colour to attract clients, Italian heritage and cultured infuses every inch of the 467 square metre duplex, the decor of the two storey Bvlgari boutique embodies the brand’s a journey through 2700 years of Roman history and inspiration. Ancient marbles and stones typical of Roman buildings are used in the design to express a classic geometry open to modern interpretation, in a continuous interplay between innovation and tradition.

The Bois Jourdan marble on the entrance’s threshold welcomes the visitor and encompasses a design key element — the Condotti eight-pointed star in red porphyry. A universal symbol of balance, harmony, and cosmic order, the eight lines are symbolic of the four cardinal points (North, South, East, and West) and time (two solstices and two equinoxes). The star signifies “Roma Caput Mundi” —  meaning “Rome capital of the world”. Growing from the 2nd century BC, the influence of Rome expanded across Southern Europe and North Africa. For the next five centuries, Rome would govern much of the known world, spreading Roman art, culture and architecture.

Also found on the flooring inside the historic Bvlgari Condotti store in Rome, the star is a unifying symbol found in all Bvlgari boutiques around the world, much in the same vein as the Romans. Adorned with Imperial Saffron shantung silk, the iconic Condotti windows on the walls are a further reminder of the originals that are still present in the original historical flagship in Rome Condotti 10.  To celebrate Bvlgari’s 130th anniversary, the original 1905 Roman flagship store was transformed in 2014 by Peter Marino, a celebrated American architect widely credited for redefining modern luxury retail. With pomp and splendour recalling Rome’s first emperor, Augustus, who appreciated symbolic potential of exotic marble, curating only the choicest and most beautiful marble for Bvlgari’s many outposts throughout the modern world.

Entering the store is reminiscent of walk through the Rome of Antiquity, with the floor in a star-patterned white Travertino marble and oval-shaped counters in light galvanised iron. Inspired by the renowned Italian architect Carlo Scarpa. This is an invitation to browse the shop and to explore Bvlgari’s most iconic collections.

Born from the Roman jeweller’s unrivalled mastery with precious stones and the Serpenti’s unstoppable ability to undergo spellbinding metamorphosis, the Magnifica Serpenti Forever Emerald One-of-a-king bag in crocodile skin fuses Bulgari’s unmatched jewellery savoir faire with its highest creativity and know how in the field of leather goods. This peculiar combination of breath-taking beauty and virtuous craftsmanship takes inspiration from the jeweller’s unmatched virtuosity with their leather crafting know-how, what results is magnificent.

The well-structured body of the bag crafted in ultra-luxe crocodile skin is refined and elevated through a mix of traditional and innovative techniques by Bulgari’s skilled artisans. As a master in capturing nature’s inimitable nuances into its gem-inspored colour palette, the “Jeweller of Leather Goods” tinges the exquisite skin in emerald green and exalts its natural appeal through the “millennium finishing”: an innovative process where a mix of waxes and caesins are activated through the final ironing at 120 degrees, conferring an alluringly shiny and brilliant look to the objet d’art.

Like a true piece of art, the bag takes nearly eight months to complete and is finished with the tag 1/1, a reminder that it is a piece unique.

In line with the opening, the boutique will feature six exclusive Croco bags and clutches handpicked by the Roman maison to retail at the Marina Bay Sands boutique, with all designs featuring the transformable Serpenti Dragone hardware that can be worn three ways.

Discover Made-to-Order at Bvlgari at The Shoppes

A magnificent chandelier inspired by Gio Ponti enlightens the product selections and the atmosphere.

In the rear portion of the shop is an oval private sales room inspired by the days Elizabeth Taylor visited Via del Condotti during the epic golden years of the Doke Vita while she was filming in Rome. The sliding door to the VIC features a Roman geometric pattern that echoes in the bronze latticework of the so-called Pantheon Mesh, drawing inspiration from the Roman Pantheon to complement the eight-pointed star, creating an iconic design and recalling Bvlgari’s great Roman roots.

In a continuous tribute to Italian designers of the 30’s, the 50’s, and the 60’s, the space houses furniture conceived by contemporary Italian designers that remind of the work of their forerunners: product counters inspired by Carlo Scarpa, sales tables in tribute to Franco Albini and Ico Parisi, and the sofas referencing Osvaldo Borsani. The beauty of shapes, the audacious combinations of materials and colours together with the excellence of Italian craftsmanship create a coherent link between the concept of the store and the trademarks of the brand, shaping the house of the brand just like Bvlgari creates its one-of-a-kind jewellery creations.

With the reopening comes the artistic vision of Made to Order, an exclusive customisable service dedicated to its most sophisticated handbags. With self-expression as one of its core tenets, Bvlgari empowers women to be themselves in an essential, inimitable way, through an elegantly personalised, one-of-a-kind look.

Infused with the essence of the Roman Jeweller and crafted from start to finish in Bvlgari’s accessories atelier in Florence, these exclusive customisable masterpieces are handcrafted just like extraordinary jewels, and also with the authentic, creative and timeless craftsmanship of Bvlgari’s artisanal approach to leather.

As Bvlgari constantly reinvents the rules of the creative process, the Made to Order service lets guests choose from a number of colour options, so that bags can be one, two or more shades. As with Bvlgari’s most captivating High Jewellery creations, the only limit to expression is imagination.

To create the tailor-made bags, a designer from the Bvlgari atelier will begin with a hand-drawn, full-colour rendering of the bag. After four to six months, the one-of-a-kind piece will be delivered, wrapped in a customisable cotton dustbag and box.

Bvlgari at The Shoppes: A Dream Given Form

The refined balance between ancient and new, tradition, innovation, and eclecticism defines the Bvlgari spirit and Peter Marino’s concept. Expressed through the décor and furniture, noble and classic materials such as bronze or marble are interpreted with a brave and modern twist.

From now till 31 December, Bvlgari will host a digital treasure hunt open to the public as part of their More Than A Wish 2021 holiday season campaign. The participant’s objective will be to find the hidden treasure and five Bvlgari markers nestled throughout The Shoppes at Marina Bay Sands mall, with all roads leading back to the Bvlgari duplex boutique. The game concludes with a pop quiz on the brand where scores will be uploaded to the leaderboard in real-time for participants to enter the draw for a chance to win the grand prize sponsored by Bvlgari. 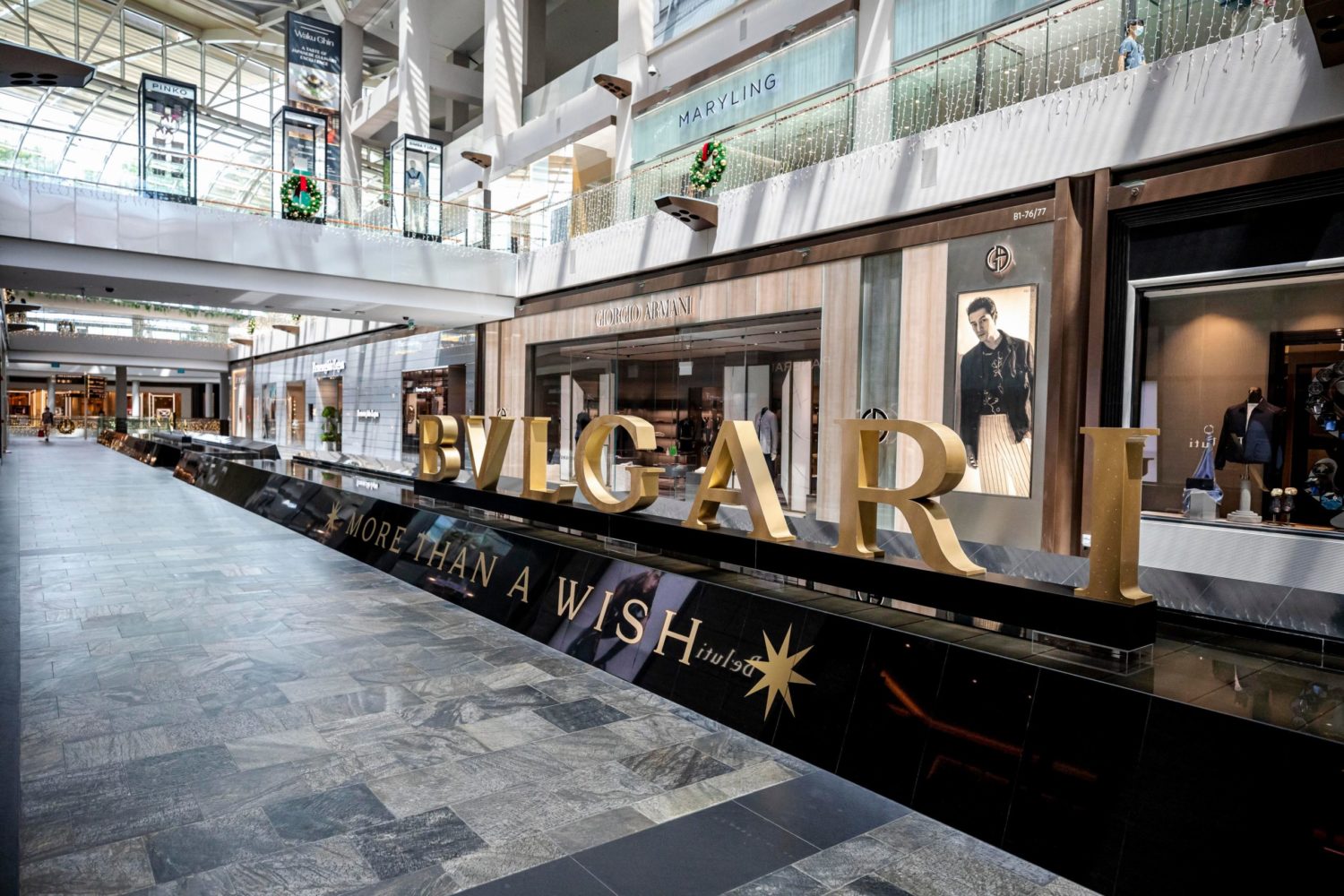 Vignesh Sundaresan Who Bought The US$69.3M Beeple NFT Wants You To Download It For Free