Homepage > Culture > Cultivating the next generation of farmers 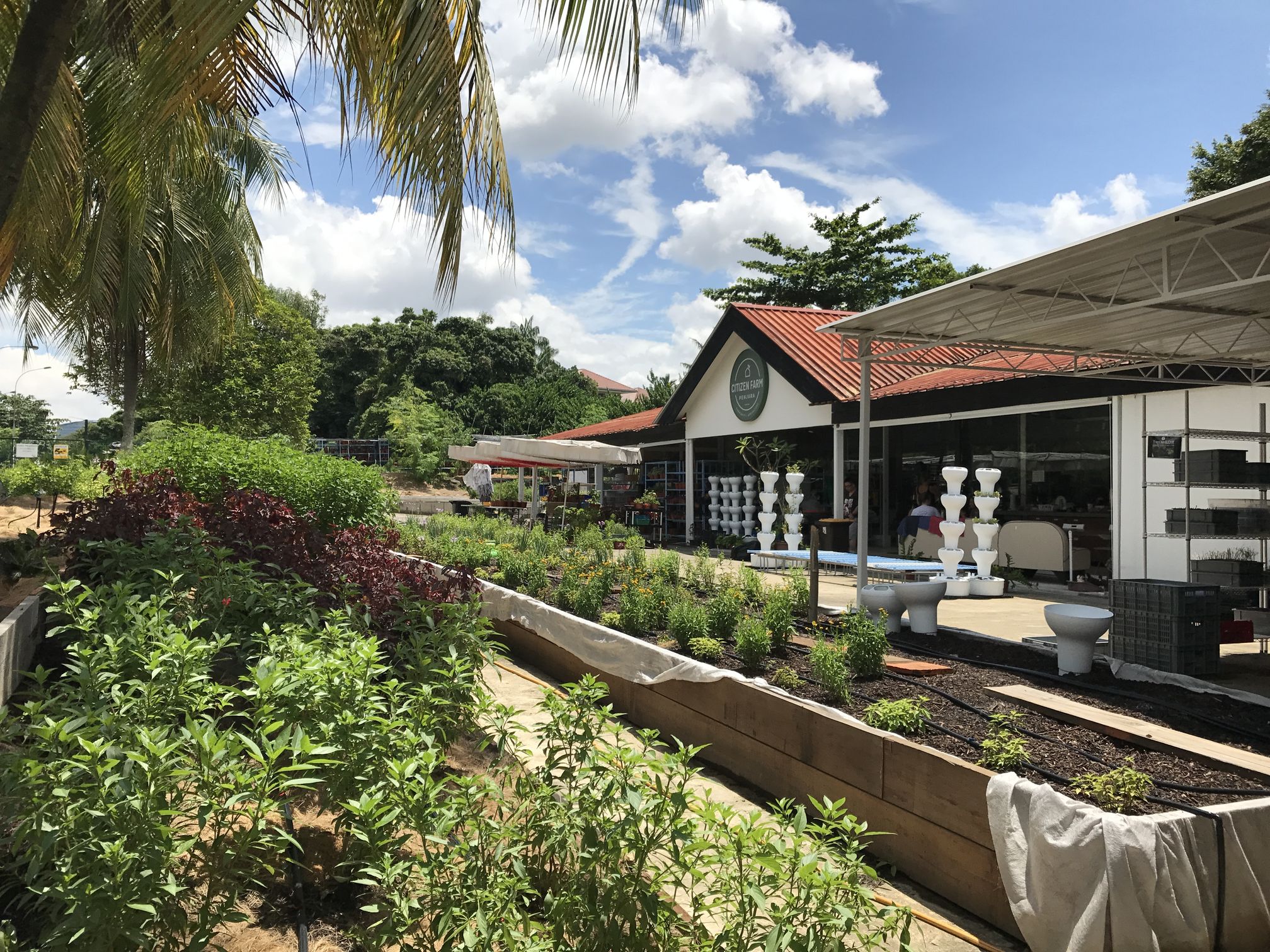 Cultivating the next generation of farmers

Growing up, I never knew much about farmers, bar the occasional mention of them. When anyone did talk about farmers at all, it usually entailed negative connotations about how they lacked education and didn’t have much else to offer society, which explains their relegation to menial work and dismal salaries.

It came as no surprise that these notions had to be obliterated when I visited Edible Garden City (EGC). The local social enterprise is all about the grow-your-own-food movement. EGC’s work includes foodscaping, educating the public about farming, improving Singapore’s food security and running its own farms.

The New Faces Of Farming

The farmers I met here fell between the ages of 24 and 30, and all of them are tertiary educated. Surprisingly, most of them do not have agriculture-related specialisations. Rather, they were brought together through the common passion for growing food and the desire to make the world a better (read: less processed) place.

“I acquired a romanticised view of farming from reading in my younger days. As I grew older, I realised that several types of challenges were present. I really wanted to be here because after learning about the problems the world is facing with regard to food security, I simply couldn’t take a step back,” said Alexis Lee, 24, who has a business degree but has been farming ever since she graduated. “Edible Garden City is a social enterprise. While we are focused on social and environmental improvements, we still apply commercial strategies to maximise our returns. Therefore, what I’ve learnt in business school can be applied here too,” she explained.

“Prior to joining EGC, I was at another farming company doing hydroponics. I came here because I really enjoy growing plants,” said Sidney Chua, 27, who is head of farm production at EGC. While he holds a diploma in logistics, he has been farming for three years, and  sees himself doing farm work indefinitely out of true passion.

Nicholas Huang, 30, the oldest among the urban farmers I met,  holds a degree in environmental management and sustainability. The assistant general manager at EGC revealed that he had spent his late teen years studying at a boarding school in Australia surrounded by housemates who came from farming backgrounds.

“On weekends and during holidays, I would go up to their farms and help them with the harvesting and sowing. I loved it. So when I finished school, it was quite natural for me to try growing my own food, such as tomatoes and capsicums,” he said. “You can say I’ve organically grown into farming,” he quipped.

For these young people, it isn’t just a simple case of indulging their green fingers. While it may feel good to see Singaporeans rediscovering the joys of farming – which was driven to the fringes of the island in the ’70s to make way for urban development – it isn’t just about taking a hobby a little further. They are choosing to farm because they recognise the need for Singapore to be less dependent on other countries for its food supply.

In March 2019, the Singapore government announced the “30 by 30” target. The plan is to have Singapore producing 30 per cent of its own food by 2030. This goal was set following the Intergovernmental Panel on Climate Change (IPCC) projection that the effects of global warming are likely to cause widespread declines in crop yields of up to 25 per cent by 2050.

Singapore, which imports more than 90 per cent of its food, cannot afford to sit passively in a world with increasingly volatile harvests. Achieving the 30 by 30 goal will be the first step towards reducing our dependence on other countries and, in turn, our vulnerability to disruptions in our food supply.

For a country with 5.6 million people occupying a land mass that is roughly two-thirds the size of New York City, such a plan poses a number of key challenges.

“Singapore is a very densely populated country. Amid the issues we face – including the primary ones related to land scarcity and farmable space – we also need to educate people about the reality of our food landscape in order to precipitate changes in their diets and other consumption habits,” Huang shared.

Chua agreed, “Education will also pave the way for community engagement, and thus enable people to come together to nurture pockets of land in the neighbourhoods.”

Another new-generation farmer at EGC, Ryan Loh, offered his views. “To achieve 30 by 30 may necessitate revising our land use policies. We have been prioritising our housing, commercial and infrastructure needs for decades. Singapore now also needs to prioritise food production. We must utilise our available spaces more fully. Currently, some individuals and organisations are already growing vegetables on rooftops. It’s a good start, because the conditions for doing so are actually excellent,” said the 26-year-old, who holds a diploma in biotechnology.

Loh is right. Rooftop farming in Singapore began about five years ago. Leading the way is Comcrop. It started out modestly with a 600-square-metre farm atop a shopping mall along Orchard Road, using vertical racks and hydroponics to grow leafy vegetables and herbs that it then sells to bars and restaurants in the vicinity. Spurred by the success of this venture, Comcrop has gone on to build a 4,000-square-metre farm with a greenhouse on the edge of the city.

Recognising the urgent need for farmable space, the Agri-Food and Veterinary Authority (AVA) of Singapore has been looking to unlock more land space, including underutilised and alternative spaces such as roof tops. It is also trying to tap on innovations such as LED technology to replace sunlight, to enable the country to grow more with less. The state agency is also helping farmers to run their operations more progressively by providing upgrades in technology, useful research findings, as well as overseas study opportunities.

Progress is being made on other fronts. A new body known as the Singapore Food Agency (SFA) is being formed, with the primary task of helping farmers to build their capabilities through technical support as well as research and development.

While EGC’s young farmers are clearly motivated by more than just money, the decision to choose a career in farming
does come at a price. It’s the elephant in the room that must be addressed in time.

“If I had only myself to support, it’s possible. If I had a family, however, it will be quite difficult to make ends meet with what I’m earning. An income of around $2,000 a month isn’t going to be enough for a family in Singapore,” Loh acknowledged. Because of this, he feels that he may have to emigrate eventually.

Lee added to Loh’s sentiments. “As a young person and someone without a family, it’s still possible for me to get by. With a family, however, it’s definitely difficult to survive, even with a very average standard of living.”

Amid their concerns about income, one of the farmers offered a different view. Felicia Tay, 27, had previously worked in Singapore’s arts scene as a sculptor employed in arts management. “Personally, I think it’s about fulfilment. My present job as a farmer with EGC allows me to change people’s mentalities about food and the environment. This motivation surpasses my need to be concerned about money.” The events executive at EGC added that while money was obviously important for survival, her own basic needs were being met. Attitudes differ here. What’s clear, though, is that sacrifices are inevitable should one choose to pursue a career in farming. The extent of these sacrifices will vary, obviously.

So the stereotyped view that farmers don’t earn much isn’t unfounded. Farmers on the whole draw a salary that’s well below the market rate today, unless one’s employment is with a large scale (and profitable) commercial farm. This has meant that the farming sector has been finding it difficult to attract new blood. One of the last jobs anyone would expect a degree or diploma holder to take up is farming. In an academically-inclined nation like Singapore, farming is still seen as an unglamorous job.

“Most of my friends and family members objected to my decision to go into farming,” Loh shared. “Few people want their kids to work as a farmer too. Many of our guys have degrees and their parents are lamenting that they are wasting their qualifications by choosing this.”

As with most things, being a farmer has its own benefits to balance out disadvantaged monetary rewards or perceived prestige. Although not always tangible, it’s the little things that seem to make this job so enjoyable for the farmers at EGC.

“Being a farmer doesn’t require me to put on a shirt and tie and sit in an office all day. My T-shirts and shorts require no ironing. The job is also far from monotonous, which is great for me. It doesn’t present the stress of most city jobs. In fact it’s quite therapeutic in many ways,” Huang revealed.

“One of the biggest benefits for me personally is that I get to educate people about farming. I work in the education department of EGC, so when people properly understand what we’re sharing, they end up joining us to advocate for more sustainable practices in their personal lives,” said Tay. “I find this really fulfilling.”

While the “30 by 30” goal is necessary and fraught with challenges, we still have a decade to 2030. The right priorities by consumers, farmers and the government may just get us there.

For everyone else on this little red dot: the next time you pick up that two-dollar pack of bok choi from the supermarket, spare a few seconds to think about the effort the farmers put into it. After all, we all have a part to play to achieve a sustainable food supply. AM

farmers farming sustainability
written by.
Basil Sim
Basil is just a normal dude who religiously follows the footballing scene, video games and likes his cereals soggy. In most situations, he is usually a very good example of a bad example.