Homepage > Culture > Film & TV > Ranking The Most Popular Television Shows of 2021. How Many Have You Watched? 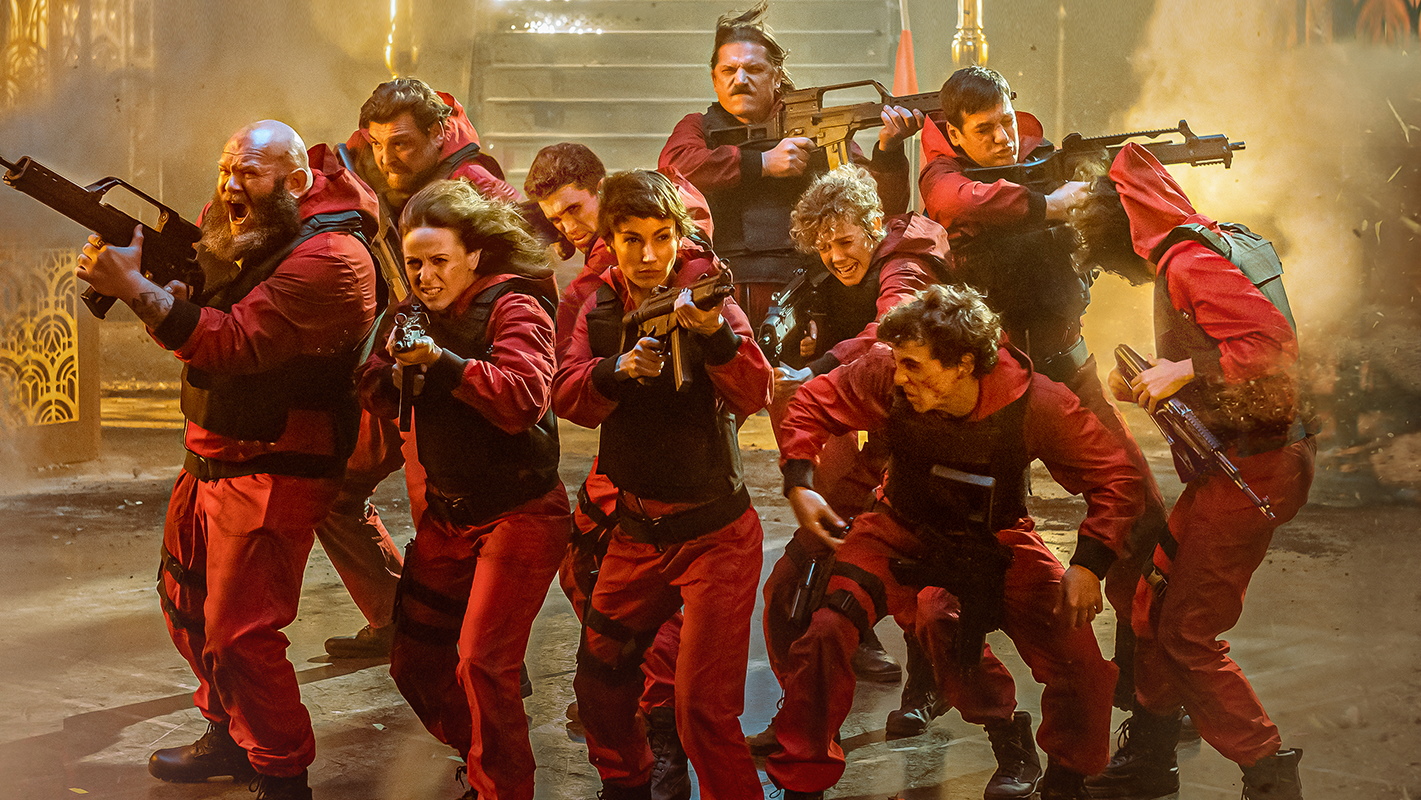 Ranking The Most Popular Television Shows of 2021. How Many Have You Watched?

We binged watched them, obsessed over them and they left us wanting more.

As the year draws to a close, it is time to revisit some of the most popular television shows of 2021 which caught our attention and left us eager to see more of our new favourite characters.

Korean dramas had quite the year. Squid Game was practically everywhere and Hellbound followed. But these were not the only ones making waves; there was the finale of Spanish crime caper Money Heist, the French mystery Lupin and Marvel Cinematic Universe (MCU) offering Loki, to name a few, which wowed critics and viewers alike.

This was undoubtedly one of the best talked-about shows of 2021. The South Korean survival horror was Netflix’s most-watched show having streamed 1.65 billion hours in the first 28 days of its premiere on 17 September. The show thus unseated Bridgerton (2020), which was till that point the most-watched show on Netflix.

The show is about a group of 456 people forced to take part in a peculiar survival show. All of the contestants are apparently facing some kind of crisis, to escape from which they need money. They participate in games that are usually played by children to take the KRW 45.6 billion on offer for the winner. But the catch is that those who lose the game, lose their life. Created, written and directed by Hwang Dong-hyuk, the series stars Lee Jung-jae and Park Hae-soo in prominent roles with Lee Byung-hun and Gong Yoo playing important guest roles.

On 9 November, Hwang Dong-hyuk told Associated Press that he is planning a second season of the show.

There is rarely a series with a cliffhanger of epic proportions as the one seen at the end of the sixth and last episode of Hellbound Season 1.

The story of Hellbound is set in a world where supernatural beings deliver their own kind of brutal punishment on people after their date and time of death is announced by a mysterious entity. Its main leads include a cult leader played by the enigmatic Yoo Ah-in, a detective portrayed by Yang Ik-june, a lawyer essayed by Kim Hyun-joo and a broadcast executive etched brilliantly by Park Jeong-min.

Directed by Yeon Sang-ho of Train to Busan fame, Hellbound became the most-watched Netflix series in 24 hours from its premiere on 19 November toppling Squid Game from the top spot.

The acclaimed Spanish heist series ended its fantastic run as one of the most loved shows of 2021 with a two-part fifth and final season. The series, which won the International Emmy Award for Best Drama Series in 2018, was the most watched non-English series on Netflix before Squid Game took the honour.

Following the release of the final five episodes of Season 5 on 3 December, Money Heist again jumped to the top spot of most-watched English and non-English shows with 189,920,000 weekly hours viewed between 29 November and 5 December 2021.

Created by Álex Pina, the show, whose Spanish title is La casa de papel (The House of Paper), is about a gang of robbers led by a mysterious man, known as The Professor, who go on to loot the Royal Mint of Spain and the Bank of Spain.

While the robberies are successful, it comes at the price of some of their lives. The gang wears red jumpsuits, cover faces with Salvador Dali masks and use names of cities as their aliases — all of which became recognisable pop culture symbols with audiences. It turned the Italian anti-fascist song, “Bella Ciao”, which played throughout the series, into an anthem for many around the world.

Among the most notable lead actors in the series are Álvaro Morte, Úrsula Corberó, Pedro Alonso, Itziar Ituño, and Najwa Nimri.

Though the HBO Max Gossip Girl reboot did not impress critics as it was expected, the show had the viewers glued to their screens. Its premiere episode dropped on 8 July on HBO Max and it became the most-watched original series of the streamer over the launch weekend. It also recorded a mammoth 15 billion impressions on all social media and the top trending spot on Twitter.

A follow-up to the acclaimed original series of the same name which aired from 2007 to 2012, Gossip Girl is about a group of teens at a private school in New York who use the power of social media to spread, of course, gossip. Jordan Alexander, Whitney Peak, Tavi Gevinson, Eli Brown, Thomas Doherty, and Emily Alyn Lind are among the main leads. Kristen Bell, who was the voice of “Gossip Girl” in the original series, reprises her role.

The show was renewed for the next season in September and will return on HBO Max.

Sarah Jessica Parker, Kristin Davis and Cynthia Nixon, who were part of the original cast, reprised their roles in this revival which is about their life in their 50s. Kim Cattrall was one of the most prominent actors from the original who did not feature in the mini-series.

One of the most anticipated series of this year, the first two episodes dropped on 9 December on HBO Max.

This sweet romantic comedy K-drama was a refreshing breeze to many who might have found Squid Game too gory. The series premiered on 28 August and steadily climbed in popularity all the way to its last episode which aired on 17 October. The tvN series eventually ended as one of the highest-rated shows in Korean cable TV in 2021 after Netflix began airing it.

The story revolves around a dentist Yoon Hye-jin, played by Shin Min-a, who is forced to move to a seaside village known as Gongjin from her city following an incident at work. Yoon encounters village resident Hong Du-sik, played by Kim Seon-ho, who is known for his ability to help anyone in any situation. As Hong helps Yoon with her situations, they begin to fall in love.

The three-part docuseries is about a tragic incident that happened to a family in Delhi’s Burari area in 2018. On the morning of 1 July that year, 11 members of the Chundawat family, including two 15-year-olds, were found dead. The bodies of ten of them were found hanging while the body of one, an octogenarian grandmother, was found strangled.

Eventually, after a three-year investigation, the police concluded that the deaths resulted from a suicide pact among the family members.

The critically-acclaimed House of Secrets: The Burari Deaths, created and directed by Leena Yadav and Anubhav Chopra, explores the case and goes into the details behind the mystery around it and why the family took the step.

The Apple TV+ comedy sports show starring Jason Sudeikis, Bill Lawrence, Brendan Hunt, and Joe Kelly was one of the best TV shows this year. Sudeikis, who is also one of the creators of the show, plays the titular character who is an American college football coach. The hilarious series focusses on how Lasso, who has no experience in association football, tries to turn around a bottom-ranked English Premier League team known as AFC Richmond as its manager.

Season 2 of the series began airing on 23 July and ended on 8 October with 12 episodes.

White Lotus is about the incidents involving guests and employees of a tropical resort named White Lotus in a span of a week. HBO describes the series as a “sharp social satire”. Created, written, and directed by Mike White, the series stars Murray Bartlett, Connie Britton, Jennifer Coolidge, Alexandra Daddario and Jake Lacy among others in major roles. The six-episode series was received well by critics, which led to its renewal for another season.

One of the most anticipated series of this year, Loki was also among the most popular shows of 2021 and an outstanding introduction to the multiverse plans of MCU. Starring Tom Hiddleston as the great god of mischief, the show took viewers on a thrilling ride across dimensions and timelines triggered by Loki’s actions during the events of Avengers: Endgame (2019).

Besides Hiddleston, Loki starred Owen Wilson as Mobius M. Mobius, Sophia Di Martino as Sylvie or Lady Loki, Gugu Mbatha-Raw as Ravonna Renslayer and Jonathan Majors in a special appearance as He Who Remains (a version of Kang the Conqueror).

The six-episode Disney+ show became a critical success and received universal praise for acting, direction and visuals. It is set to have a second season, taking forward the story of the Phase 4 of MCU.

Apart from Loki, Marvel Studios had a packed television schedule for 2021 with few other shows including WandaVision (starring Elizabeth Olsen as Wanda and Paul Bettany as Vision) and The Falcon and the Winter Soldier (starring Anthony Mackie as Captain America and Sebastian Stan as Bucky Barnes).

Vincenzo is about a Korean-origin mafia consigliere named Vincenzo Cassano of a crime family in Italy who returns to South Korea following an assassination attempt during a power struggle. In Korea, Vincenzo begins his attempt at recovering a hidden stash of gold bars from a building. But in his way are the tenants and a dangerous businessman who has his own nefarious designs with a drug.

Vincenzo was one of the highest-rated Korean dramas of 2021. Like Hometown Cha Cha Cha, the tvN series was also aired by Netflix.

The French mystery series consisting of a total of 10 episodes in two parts has been a roaring success since premiering on Netflix on 8 January.

The story revolves around the gentleman thief Assane Diop, who is inspired by the exploits of legendary thief Arsène Lupin. While carrying out his work as a thief and master of disguise, Diop eventually plans to avenge an injustice done to his father.

The second part of five episodes was released on 11 June. Sy had in a tweet in May revealed that Season 3 of the series has been confirmed.

Charles-Haden Savage (Steve Martin), Oliver Putnam (Martin Short) and Mabel Mora (Selena Gomez) are three strangers living in a posh apartment building in New York City, US. However, they have a common obsession with true crime and end up investigating a neighbour’s mysterious death, which was dismissed as suicide by the police.

Created by Steve Martin and John Hoffman, the mystery-comedy series premiered on 31 August on Hulu and soon became one of the most critically acclaimed shows of the year. Renewed for a second season, the series will cast Martin, Short and Gomez in their respective roles.

Kate Winslet delivers one of her career-best performances as Marianne “Mare” Sheehan in Mare of Easttown.

The American drama series follows Mare, a detective from Pennsylvania whose personal life is in shambles, trying to solve a murder case and keep the faith of the people.

The seven-episode limited series premiered on HBO on 18 April. It received 16 nominations at the 73rd Primetime Emmy Awards and won four, including Outstanding Lead Actress in a Limited or Anthology Series or Movie for Winslet.

The arrival of a mysterious young priest in a small town on an isolated island triggers a series of supernatural events affecting devout Christians. Among those caught in the middle are a former convict and a Muslim sheriff.

The Netflix miniseries was released on 24 September and contains seven episodes each named after a book from The Bible.

Disney entertainment hbo Marvel Cinematic Universe money heist Netflix Squid Game TV Shows What to stream
written by.
Manas Sen Gupta
Manas enjoys reading detective fiction and writing about anything that interests him. When not doing either of the two, he checks Instagram for the latest posts by travellers. Winter is his favourite season and he can happily eat a bowl of noodles any time of the day.
Travel Food Culture entertainment