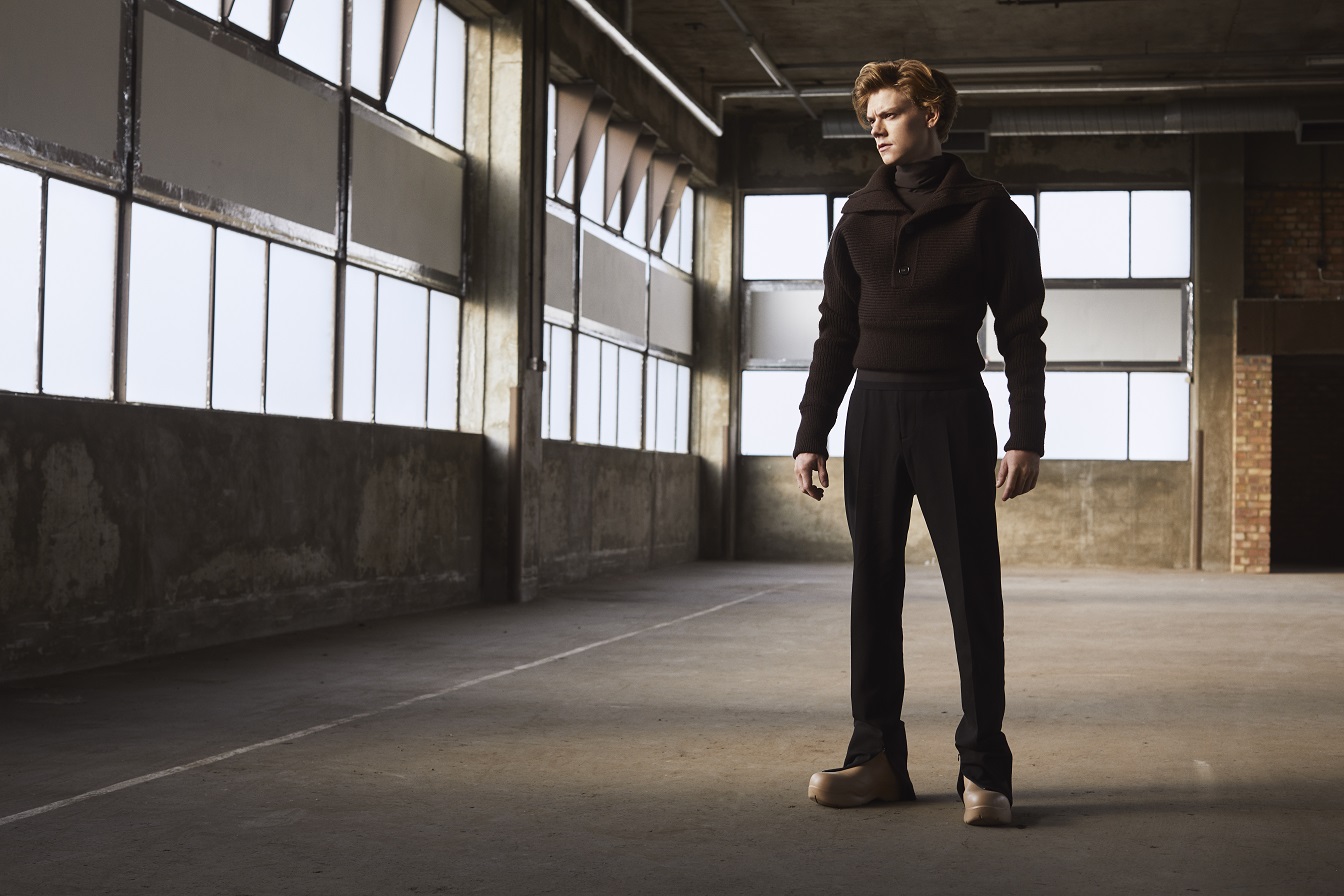 Thomas Brodie-Sangster and The Queen’s Gambit

At press time, The Queen’s Gambit is the No. 5 show on Netflix Singapore. If you haven’t watched it yet, you should – we had early access to this limited series, and enjoyed every minute of it. Thomas Brodie-Sangster stars across Anya Taylor-Joy in the drama about a fictitious chess prodigy’s trials and triumphs, and suffice it to say that it’s yet another wildly different role from what you’ve seen him portray. This time, he plays the mysterious and aloof chess champion Benny Watts, who serves as the foil, mentor and more to Taylor-Joy’s Beth Harmon.

If there was a recurring theme in the production of this cover story, it was how people seemed to recall Brodie-Sangster so differently. A few people remembered him as “the kid from Love Actually” – a good 17 years after the polarising movie’s release (couples have split because it brought out their conflicting views on love). Others brought up his starring role as Newt in The Maze Runner trilogy. Of course, many recalled his part as Jojen Reed in the HBO hit Game of Thrones.
Indeed, this 30-year-old English actor’s career, which spans nearly 20 years now, has been characterised by diversity. From critically acclaimed cult films to blockbuster trilogies and award-winning TV series, Brodie-Sangster has done them all. Along the way, he’s even managed to dabble in various other things, from voice acting to music.
Brodie-Sangster has repeatedly demonstrated his versatility as an actor, and his easy chemistry with his fellow cast members. It’s clear that he’s transitioned very well from a child actor, and continues to expand on his craft with depth and scope. We certainly have much to look forward to from this young thespian.

The upcoming Netflix miniseries The Queen’s Gambit sees you playing chess champion Benny Watts. How did you come to work again with director Scott Frank, after 2017’s Godless?

Scott’s a fantastic director and writer, and I had a great time working with him on Godless in 2016. Anyway, he called me up and said that he had this general idea about a world of chess, and how he had this character he was working on that he’d like me to attempt. That got me excited, and I trusted him, so I read the script. It was really interesting, but the telling of the story as a whole was challenging as well, so I decided to go for it.

It sounds like a return to familiarity in some ways.

Oh, yes. It was quite bizarre actually, because many crew members from Godless were going to return as well, from the director of photography to the first assistant. The Queen’s Gambit was largely shot in Berlin, but during its production, I was with a bunch of Americans that I was previously hanging around with out in the middle of the New Mexico desert.

It looks like the role of Benny Watts was written with you in mind right from the start. How much input did you have when it came to developing this character?

I think what you normally find is that directors who have written the project themselves are a lot more comfortable with allowing people the space to give their own input. Scott is very generous and open that way. In terms of characterisation, I personally find that things really start coming together once you get into the clothes that the costume department has prepared for you. You get a feel of what feels right and what works, and that’s when the character begins to come alive and feel tangible.
When I saw how they were going for a strange-looking, pirate-like character for Benny Watts, a chess player from a very different time period, it clicked for me: he’s a rebellious figure, but also a bit of a cowboy. From there, it’s playing as much chess as possible to work on the tactile parts of the role. There’s a lot of work with the hands and fingers, and he’s always playing with his ring. It’s working on the little details like that.

Yes, I noticed that every character has his or her little set of mannerisms and habits during a game in THE QUEEN’S GAMBIT.

Yes, that was a very personal thing. It was very interesting when we came together [to play chess], because we saw that everyone had been working on developing their little habits. We had some chess champions who were working as consultants with us too, and sometimes we’d do nothing but practise handling the pieces. Making these actions look authentic requires finesse, whether it’s how you move your piece to how you press the clock. We had to develop spatial awareness too, in terms of being aware of the pieces on the board, especially when you were playing speed chess. You don’t want to knock pieces over there, or you’ll just look sloppy.

Did Scott Frank specify anything for how you’d play your role?

He did tell me that he wanted the character to have as much facial hair as possible, and he gave me plenty of time to try and grow that mustache. What you see on screen was all that I could muster on my face. (laughs)

Accent-wise, I asked Scott if he would like me to do a bit of the New York twang. But because the characters were from all over the world, he didn’t want the series to turn into a show with multiple accents, or the audience wouldn’t be grounded anywhere. That was the only thing, I think, that he said no to.

This is a tad premature, but do you think there’ll be a second season for The Queen’s Gambit?

I don’t know. We had the same thought about Godless as well, because everyone loved making it, and thought that it was such a good story. I think Scott likes to tell a story with a clear beginning, middle and end. We live in an era when people are just obsessed with prequels and sequels, and repeating ideas that work just to make more money. But it’s not always about that, because you can lose track of that lovely narrative structure. Maybe Scott has an idea for a sequel, but I don’t personally see it, and we haven’t spoken about it.

TV is, of course, just part of your overall work. You’re involved in films like The Maze Runner series as well, and you’ve done some voice acting. Do you have a preference between them?

I love the magic of filmmaking. I absolutely love being on set, watching hundreds of people working together in such a small environment. Each person isn’t just talented, but also very good at what they do. That, to me, is very impressive, and makes me want to do the best that I can myself. It’s all fictitious, of course, but it’s also grounded in the reality of our efforts, and when the energies combine in this “storytelling machine” and everything comes together properly, it seems almost real in some ways. That’s when you have the most productive sets that create the best stories and films. It’s gratifying and rewarding.

I think voice acting is fun too, because you get to play characters that you’d never get cast as. Maybe you’re just not a match for this character visually or physically. Maybe it’s some other reason. Voice acting is a little less restrictive that way. There’s also the opportunity to play around with your voice, and even take on multiple characters in a single show. It’s fast too: you’re in a studio dressed in whatever you want, and there’s no makeup involved. Instead, it’s all very techy – you’re just there with a sound engineer and your fellow voice actors, and focusing on things like microphone technique. It’s interesting for sure, but it’s not my first love.

How do you choose which roles to audition for? Is it always the script, like what you did with The Queen’s Gambit?

Yes, and it’s still something that I still struggle with. I’m mildly dyslexic, so that doesn’t help, but it’s really in trying to work out if something is good or not, and whether the way you envision things is the way they will turn out. The script is all you’ve got to go on though, along with the director and producers and what they’ve done in the past. That’s why it was lovely doing The Queen’s Gambit, because I knew the people who would be behind it. Coming in fresh, however, it’s difficult to know what’s what, honestly.

You’ve played a varied assortment of characters since starting out in 2001. Was this a deliberate choice?

Yes. And no. Yes, because it’s much more fun to play characters from all over the place. And no, because these were just what came up, and the jobs that I got. But it’s nice that I got to try doing a variety of roles.

Looking back, were there any roles that you regret taking up, or wish you’d done differently?

The broad answer is no, but you’re always going to be critical because that’s how you learn and develop yourself for the next role. Part of the beauty of playing a role is that you go through things in the moment, but whether you’ve got it down or not is up to the director and the creative team. They are the ones who pick the exact take to include in their show, and cut around it however they want. It’s none of your business at that point. There’s something a little scary about that because if you mess up – or feel like you did – then there’s really nothing that you can do about it. The best that you can do is to let it go.

And you’ve made your peace with that aspect of acting.

I think I did that from a very early age. When I started out in this industry, I had no insecurities or issues like being overly critical. I kind of didn’t really care, even. I’d get on the set and just do my thing, because all I wanted was to have fun. I wasn’t a big movie buff or longed to be an actor – it was just a cool job for me while I wasn’t in school. The over-analysing and overthinking came later on, occasionally, but part of it comes from wanting to be better and wanting to hone your craft. These attitudes do contradict one another sometimes.

What’s next on the cards for you?

That’s a hard one, because you only have a certain amount of control over your career, while the rest of it just kind of happens around you. The entire COVID-19 situation has given me a chance to work on some other things in life right now, and it’s been quite reassuring to reflect on just how lucky I am to have the luxury to do something that I love and throw it out there to the world.

Five Things You Need To Know About Kingdom: Ashin Of The North

Follow us @Augustman
*Pretends to be shocked that nothing is FOC* Well,

Embarking on a solo project when you’re an accom

25- year old @zacariasbonat made history for the D