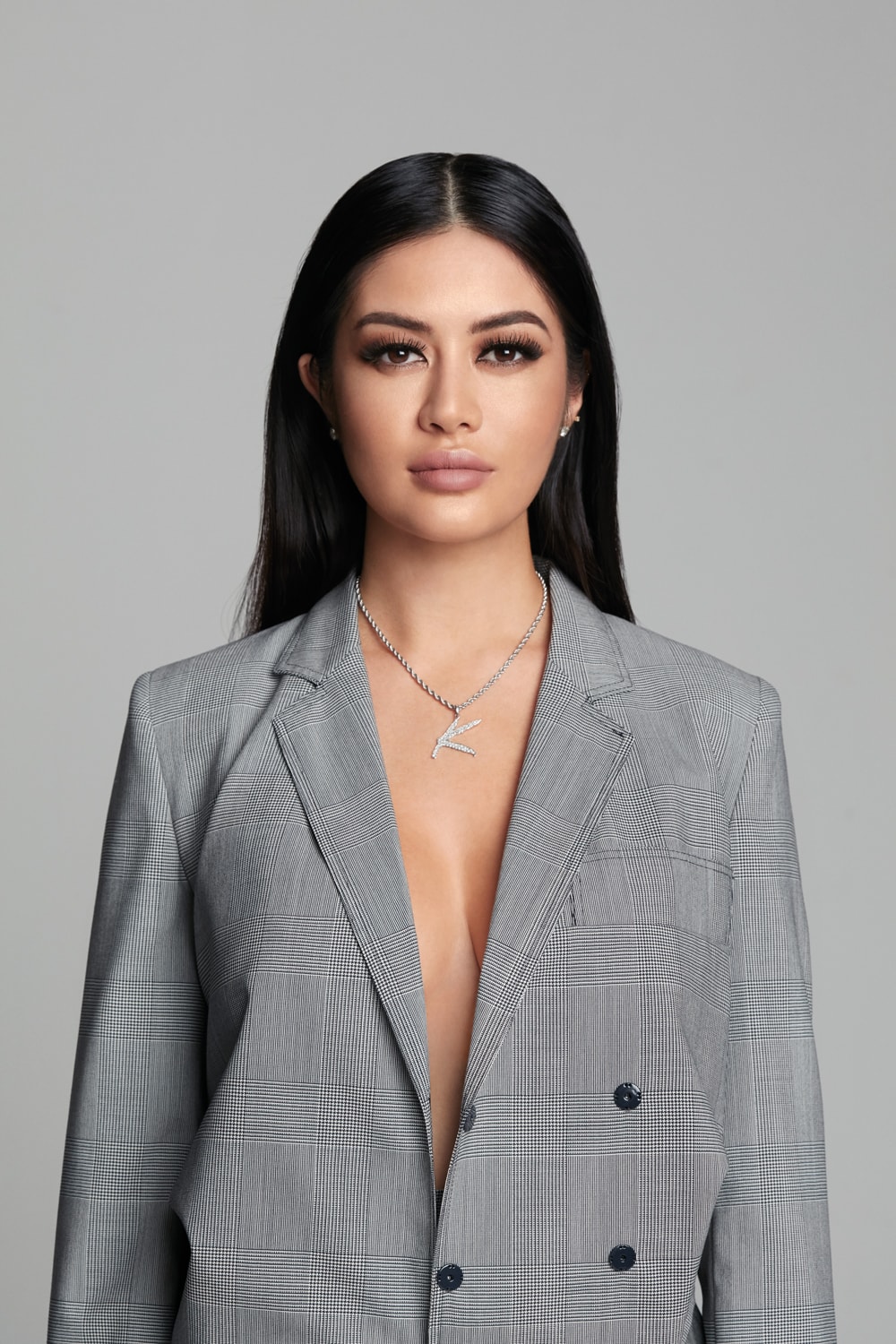 Model-DJ Kim Lee Is Not Just A Pretty Face

Kim is telling me about a supernatural experience she had in a Singapore hotel that shall remain unnamed. She was startled awake at 5am and found herself unable to move. My logical mind brushed it off as sleep paralysis, but Kim swore that it was a ghost: “A black thing on top of me”. The episode lasted a few minutes. When she was finally able to move, she switched on the lights and called home. Now, Kim always leaves a light on whenever she’s drifting off to sleep in a hotel room.

And Kim does stay in hotel rooms a lot of the time. The DJ is the quintessential globe-trotter, living out of battered suitcases in the day and helming the decks of different clubs at night. She modelled for a while too, her striking French-Chinese looks landing her a number of gigs. And she was recently in our part of the world to host the Asian edition of Yo! MTV Raps, an old favourite recently revived for a new generation of viewers.

“The whole thing happened so fast. I’ve always wanted to work with MTV Asia, and Yo! MTV Raps is such an iconic show, so when they called me to audition for the part of the host about a month before it went into production, I went for it,” reminisced Kim. She bombed, at least according to her. But, a week later, she got a call from the producers who wanted her on board.

In a way, she’s returning to her roots after spending the entirety of her life in Los Angeles. Kim’s mum had emigrated to the city in the 1970s from her home country of Vietnam. In LA, she met her husband, a screenwriter, and married him, before uprooting Kim’s grandparents to live with them. But her mother never forgot their Asian roots and constantly reminded Kim of them while she was growing up.

The world was a different place back then, perhaps painfully more so for an Asian girl growing up in a Western country. “My grandparents thought I was going to mess up my life,” shared Kim, laughing. According to her, it didn’t help that she was a rebellious teenager. This trait would, ironically, be the very same quality that would help her in her adult life. “I knew that it wasn’t going to be easy to forge an electronic music career for two reasons. One, I was a woman in a male-dominated industry, and two, I was Asian. I met many people who didn’t believe in me. But I just kept at it, and was stubborn enough not to take no for an answer.”

Of course, there have been times when Kim was painfully close to giving up. But, it was always the thought of disappointing her family that pushed her on. It’s a rather Asian thing, but Kim knew their hearts were in the right place. “They always gave me the freedom to do what I want… as long as I succeeded,” shares Kim, erupting into laughter once again. Her mum did force her to take piano lessons when she was eight, a decision that seemed cruel to a young Kim at the time. Today, she’s forever grateful to her mum for making her study the instrument, which sparked her love for music.

“Here I am, trying to be more conservative, and my parents are pushing me to look sexier. They keep telling me to give the people what they want.”

On the other hand, her grandparents, whom she was very close to, were more critical of her career choice. Not because they wanted her to be a doctor, lawyer or any of your other stereotypical roles revered by most Asian families. Rather, they were disdainful of the vagaries of the entertainment world. It was only when a major Vietnamese broadsheet put Kim on the front page that her grandparents finally understood their granddaughter was, suffice to say, pretty big.

“When they finally understood my job and accepted it, that made me really happy. They were my biggest fans and always asked when my next show was,” Kim says with a huge smile on her face. “Unfortunately, my grandfather passed away last year. Rest his soul.”

Kim possesses that rare characteristic of being painfully self-aware. Let’s be honest: she is incredibly attractive, and she knows it. Her 500,000 followers on Instagram aren’t just following her for her musical talent, which she undoubtedly possesses in abundance as well. Her quiet sigh when that inevitable question came up told me everything I needed to know.

For the record, she considers her looks to be both a curse and a blessing, the former because no one ever takes her seriously for her music and the latter simply due to the fact that it helps her open doors. “But, to stay in the room, you need more than just looks. You need to have the skills, the right attitude and even a bit of luck,” Kim reiterates.

What’s ironic is that her parents are the ones who constantly push her to, well, reveal more skin. “Here I am, trying to be more conservative, and there they are pushing me to look sexier. They keep telling me to give the people what they want to see,” says Kim, chuckling.

The Curse Of Two

Once upon a time, Kim took part in The Amazing Race Vietnam together with another DJ named Pharreal Phuong. Both of them started strong, before fading in the third leg of the race, finishing last and getting knocked out. Kim explains that she had to slow down for business reasons. She was booked for a couple of shows that she could not cancel.

Kim was also part of a DJ duo called KimKat. A Russian femme fatale, named Katrina Nova, and an Asian-American model spinning in the hot and sweaty environs of a club? It was a marketing masterstroke. They ticked all the boxes that were required to conquer the global market. Then, about four years ago, they fell apart due to creative and business differences, and Kim found herself flying solo. Once again, it seemed like being part of a twosome was always Kim’s undoing.

The partnerships might have each taught her many things, but it was the musical split that really enlightened her. She knew then that she had to have complete control over all aspects of her career. It’s one of the main reasons why she’s opted to stay independent and not be chained to a record label; Kim intends to remain a solo music act for the foreseeable future.

“When I released ‘Boss B****’ with rapper Lil Debbie two years ago, the track did so well that her manager asked me if we wanted to be a duo. It was very rare for a hip-hop artiste to layer vocals over a house beat, so what we did was unique and had potential. But, I just couldn’t do it,” Kim shares. She turned down the request and continued hustling the only way she knows how.

By the time you’re reading this, Kim will be back in her hometown of Los Angeles, contemplating her next career move while stroking her cat Mochi. One possible route she’s considering involves taking acting classes while juggling her music career. And if her previous experiences and successes in the entertainment industry are anything to go by, she’s going to take her hardest shot, ghosts in hotel rooms be damned.

feature interview kim lee
written by.
Farhan Shah
Farhan believes that every man needs a good tailor and a better barber. You can usually find him at the gym, the bar or the poker table, usually all three in one night.