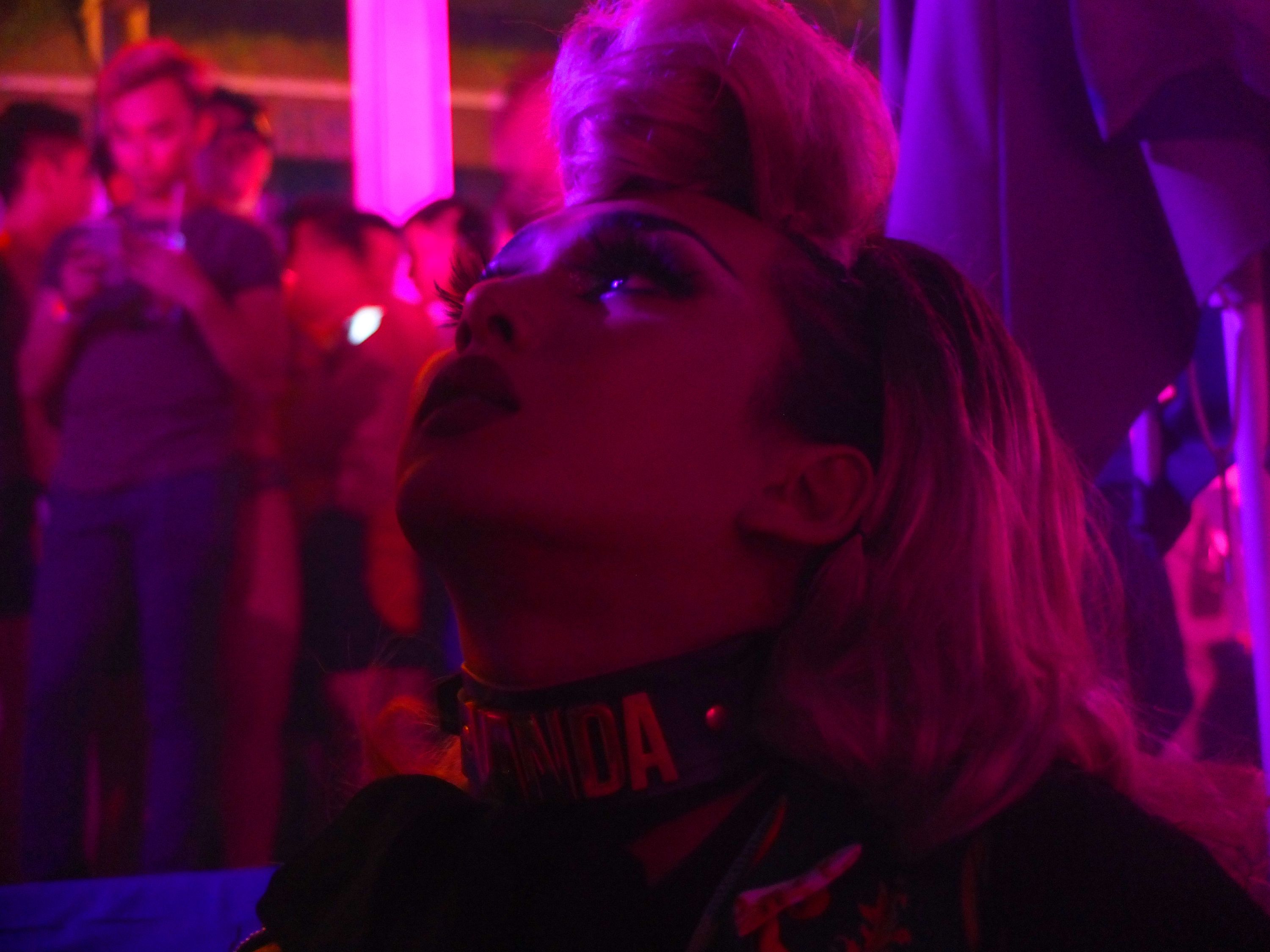 “Are you coming for the party?” Vanda asked. He stood at the door in a stunning neon one-piece suit waiting for a response. I deliberated for a bit, then declined. And so he smiled, shrugged and closed the door. It might have been fun, but I didn’t want to take advantage of his hospitality in the name of work. And considering how my night ended, it was meant to be.

Welcome To The House Of Miss Joaquim

Hours earlier, I had come backstage expecting to find a scene from A Star Is Born. But instead of vanity tables piled with makeup, wigs and falsies, and racks straining under flashy costumes, it was orderly. The dresses, heels, boots and heel boots were arranged around open suitcases. There were no dressing tables with mirrors framed by light bulbs, so the performers were applying makeup in the light of their mobile phones. The dimmer corners of the space served as changing rooms. In the shadows, I could make out performers putting on padding to augment their figures in all the right places.

In the middle of the room, a basic curtain hung from the ceiling. I found Vanda behind it. He was doing his makeup and blow-drying a wig into shape. “Make yourself at home,” he said as he busied himself with getting ready for the show.

Vanda Miss Joaquim is Azizul Mahathir in real life. The 29-year-old has been performing drag for more than 10 years; last year, he represented Singapore in season two of Drag Race Thailand and came in fourth. He is also the first Muslim drag artist in the world to compete internationally, which definitely helped to put Singapore’s drag scene on the map.

Vanda takes his act seriously. He mixes his own music and choreographs his own dance moves for his performances, and takes great care in preparing his costumes depending on the themes and venues of his gigs. Rehearsals take place three times a week, each session lasting three hours.

When Vanda was ready, I walked with him to the stage. “I’m nervous,” he said. “What about you?” And he proceeded to steady himself with long, slow breaths. Seeing the seasoned performer this nervous was unexpected – and eye-opening.

The audience was small, and distracted. Vanda and four counterparts performed to Britney Spears’ ‘Toxic’ accompanied by some effects involving sand, water and fire. I thought it was pretty good, even though they only had a corner of the stage to execute their moves. But the response from the crowd was dismal.

“People are generally not into drag shows now somehow. They’d rather watch topless male and go-go dancers,” Vanda lamented. He remembered a time when places like Boom Boom Room, Avalon, and Play were hot venues to perform at. “[Here], in one month, I get two to three bookings. In Thailand, it’s almost every day.”

What did he think is the reason for this? “People now see drag as ball culture,” he explained. “But my creation, The House of Miss Joaquim, is much more than that. It’s an inclusive space with a family-like environment for drags to grow. I share all that I know to help them polish their craft.”

Make no mistake: drag is a craft. If we took a leaf from the history book of entertainment, we’d find that men have impersonated women to entertain audiences from the beginning of civilisation. Beloved characters such as Australia’s Dame Edna, and Singapore’s Kumar and Bibik Belachan are essentially drag acts. If you think about it, the awkwardness of men dressed as women naturally offers much potential for physical comedy. That aside, movies like Tootsie and Mrs Doubtfire also explored the subject of straight men (played by Dustin Hoffman and Robin Williams respectively) going into drag for reasons other than entertainment. And who says you can’t do drag just because you like it? Just look at some of the men in RuPaul’s Drag Race.

Roberto Grilli: The man who lights up the streets for every Singapore Grand Prix

Anyone who has attended a Tiffany Show (or Bugis Street parade, if you’re old enough) will have been confounded by how feminine drag queens can appear – it’s a specific subset of drag culture concerned with emulating feminine traits to the greatest degree. There are many reasons for this, but as Eric Anthony Dorsa poured out in his moving TED Talks, it’s primarily about figuring out who we are and, ironically, making a journey towards authenticity.

Within this subset also exists a little-known tension. According to Vanda, drags are treated with disdain by parts of the LGBT community. It’s an attitude that may be par for the course for some segments of mainstream society, but quite surprising coming from the LGBT community. “I guess it’s human nature to be suspicious of anyone who isn’t like ourselves. Subconsciously, everyone, gay or straight, becomes defensive to various degrees,” opined Vanda.

Just before Vanda’s performance, I saw a man come up and grab him by the arms. The evening’s music muted their exchange, but Vanda looked genuinely distressed. He confirmed this backstage. “We are people too and need respect like everyone else. You can have fun with us, cheer for us, and support us. But don’t humiliate us by touching us inappropriately.” Lest you’ve forgotten, Vanda is biologically a man; that brief episode highlighted the vulnerability of women, whether real or otherwise.

Football in Singapore: A pipe dream?

The End Of The Night

I asked Vanda what he hopes to achieve by the end of his career. His answer could have come from anyone: to have made his mother proud and to have pushed the boundaries of his art to be recognised internationally.

I didn’t miss the point that such a dream is harder for a drag queen to achieve – there is struggle in the very act of existing in drag. Ironically, life outside of it isn’t necessarily easier. “When I’m on stage, I feel empowered. I do what I enjoy. When I’m in drag, everyone wants to talk to me. Out of it? No one. I want to be recognised outside too. I’m not talking about being famous, but to be accepted for who I am and what I do.”

We Are What We See

I thanked Vanda for his time and left on a cab. The driver said he’d been circling the area, and must have seen Vanda, who saw me out. Out came a series of questions and opinions: “Did she explain why she’s [like that]? Did she choose this life? You know, I don’t agree with homosexuality, and I think [dragging] is their form of escapism.”

I was dumbfounded. For what it’s worth, few people can pull off what drag artists put themselves through for an honest living, let alone do so night after night. And this isn’t the ‘struggling artist’ trope we’re talking about, but a lifestyle that goes beyond those few hours spent on stage.

The night’s experience more than opened my eyes to a subculture, I saw first hand how it actually holds up a mirror to society. What we see in drag artists is a reflection of our very own attitudes.