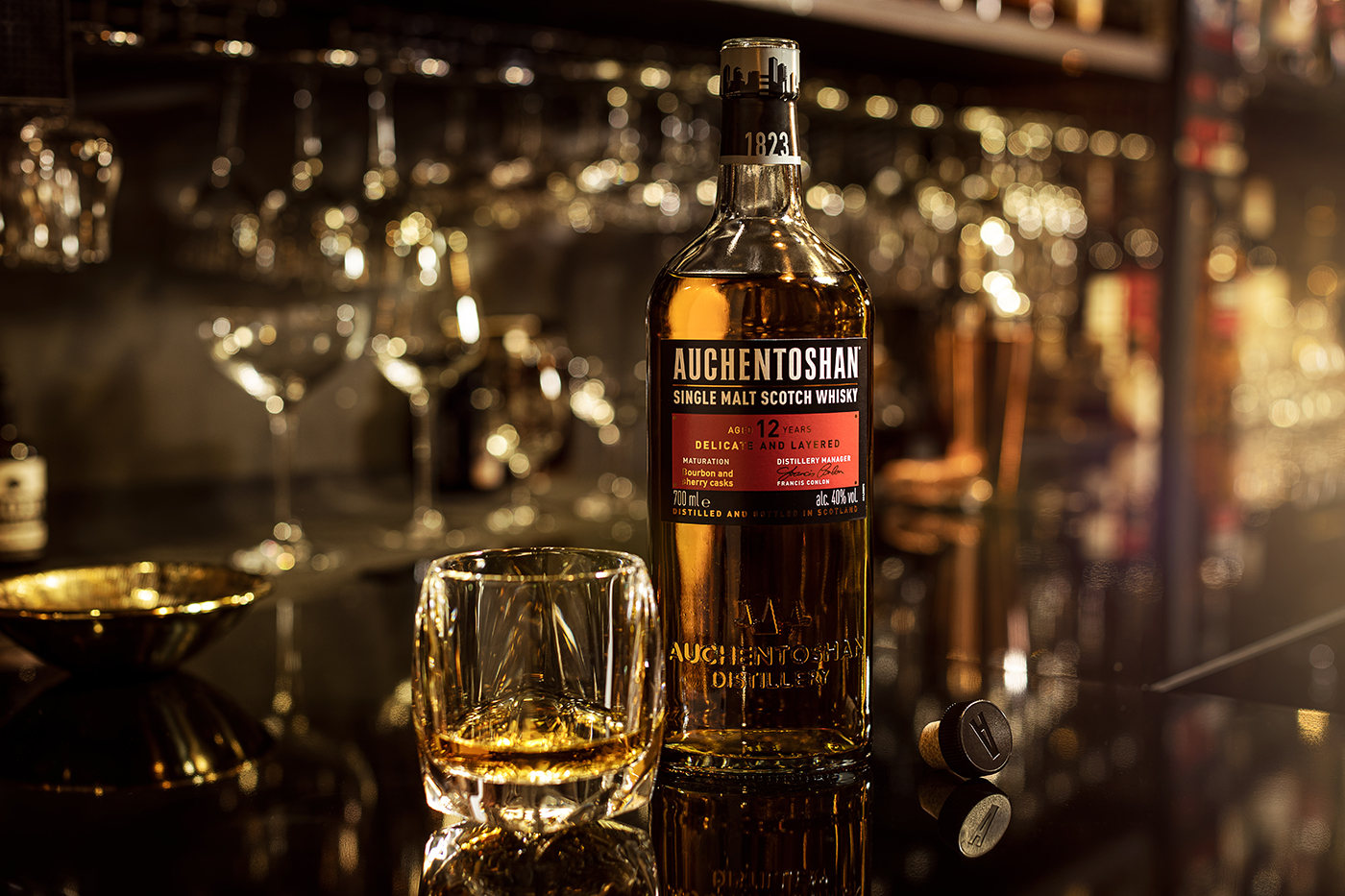 Auchentoshan Is The Triple Distilled Malt Iconic For Its Smoothness

Appreciated by whisky lovers for its smooth flavour and beloved by those whose introduction to malt whisky is made palatable by its lightness and accessibility, Auchentoshan Single Malt is one of only a few remaining Lowland malts. A long cherished landmark on the Glasgow horizon dates back to the time it was granted its distillery licence in 1823, Auchentoshan is unique; while others distil only twice, Auchentoshan Distillery is the only one that continues the tradition of triple distillation.

Auchentoshan, meaning `Corner of the field’ in Gaelic, produces a delicate, smooth and light single Malt Whisky. The subtle aroma and flavour of its Spirit is achieved by the unique Triple Distillation process, whereby the spirit is not distilled twice, as elsewhere in Scotland, but instead, distilled three times producing even greater refinement to its character.

“This is a classic Lowland distillery, not only in its location, but also in its adherence to triple distillation. Light-bodied whiskies result; light in flavour, too, but by no means bland. If you fancy single malts, but do not care for intensity, Auchentoshan offers the perfect answer … subtlety.”

There are a number of factors that can contribute to smoothness, but fundamentally it’s all down to the number of congeners and impurities in the spirit. Congeners give many types of alcoholic beverages their flavour, developing and changing during distillation and maturation; some are more powerful than others.

During the distillation process the distiller has an opportunity to keep or remove these congeners depending on the style of whisky they want to make. Distillation is a way of concentrating the good parts of the fermented “mash”, and leaving behind the less desirable elements. Using heat to break apart the various elements of the mash, a distiller select just the desirable components. 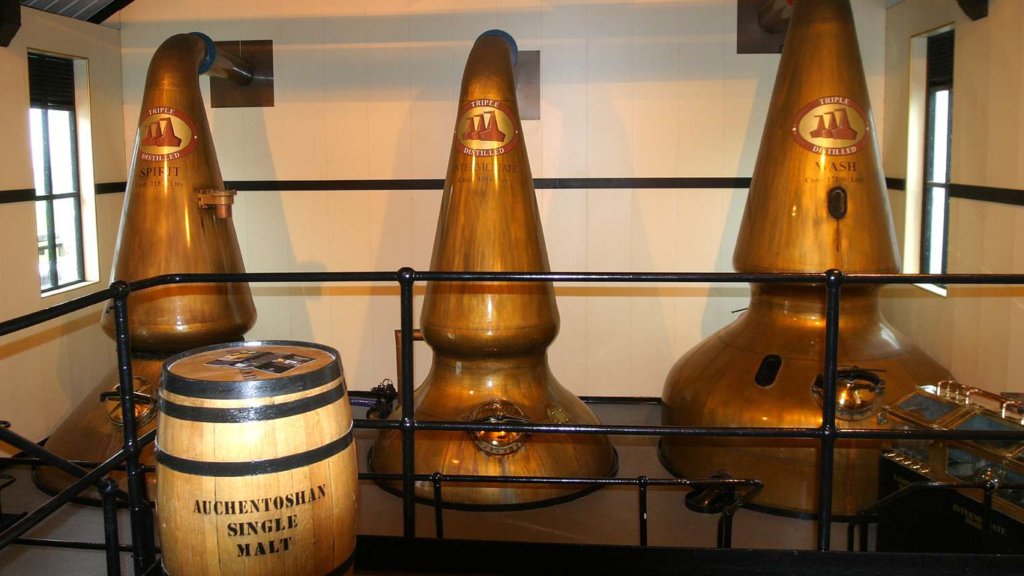 In double distillation, as the liquid in the still (the wash, which is comprised of water, about 8% alcohol and congeners) boils, the alcohol and flavourful congeners will separate from the water, vaporise and travel up the still into the condenser where they are collected before being distilled once more in the spirit still. Each time this happens the vapour is essentially being redistilled, each time separating out more congeners and impurities becoming a lighter spirit – this process is called reflux.

So to create a smoother new make spirit, the distiller first needs to increase the amount of reflux in the still and the best way to do it, is to increase the number of distillations the spirit goes through. This is where triple distillation comes into the picture: Every time the spirit is distilled it becomes stronger in character, producing a spirit like Auchentoshan, between 80 and 82.6%abv. Hence, the unique impact on flavour: the stronger the spirit, the lighter its aromatic character will be.

According to Michael Jackson, the author of the famous Whisky Companion, he said of Auchentoshan, “This is a classic Lowland distillery, not only in its location, but also in its adherence to triple distillation. Light-bodied whiskies result; light in flavour, too, but by no means bland. If you fancy single malts, but do not care for intensity, Auchentoshan offers the perfect answer … subtlety.” 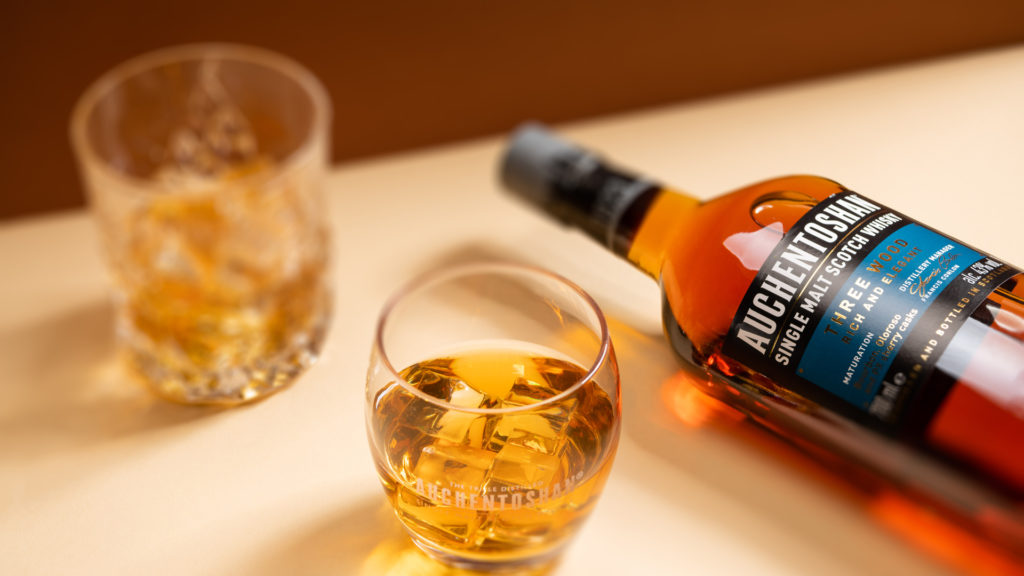 A legacy of tradition enjoyed through modernity

Throughout its long history, the distillery, Auchentoshan is one of only a few remaining Lowland Malt Whisky Distilleries, that has witnessed the development of Glasgow from its early industrial days, that saw its shipbuilding supremacy famed the world over, through to the modern and cosmopolitan Glasgow seen today.

Resting at the foot of the Old Kilpatrick Hills, overlooking the famous River Clyde, once renowned as the Scottish gateway to the world,  six careful owners who have handed down its unique production process through the generations.

Although it still retains all its traditional production methods including its unique Triple Distillation process, the distillery has been extensively refurbished since its acquisition by Morrison Bowmore Distillers Ltd in 1984. In the wake of owner Suntory’s merger with Beam to create Beam Suntory in 2014, the brand has seen a tonal shift. Auchentoshan has moved away from traditional stereotypes  by encouraging younger drinkers to share and enjoy an Auchentoshan cocktail with their friends. The bold new packaging reflects the brand’s refreshing urban positioning and carefree attitude towards whisky culture. 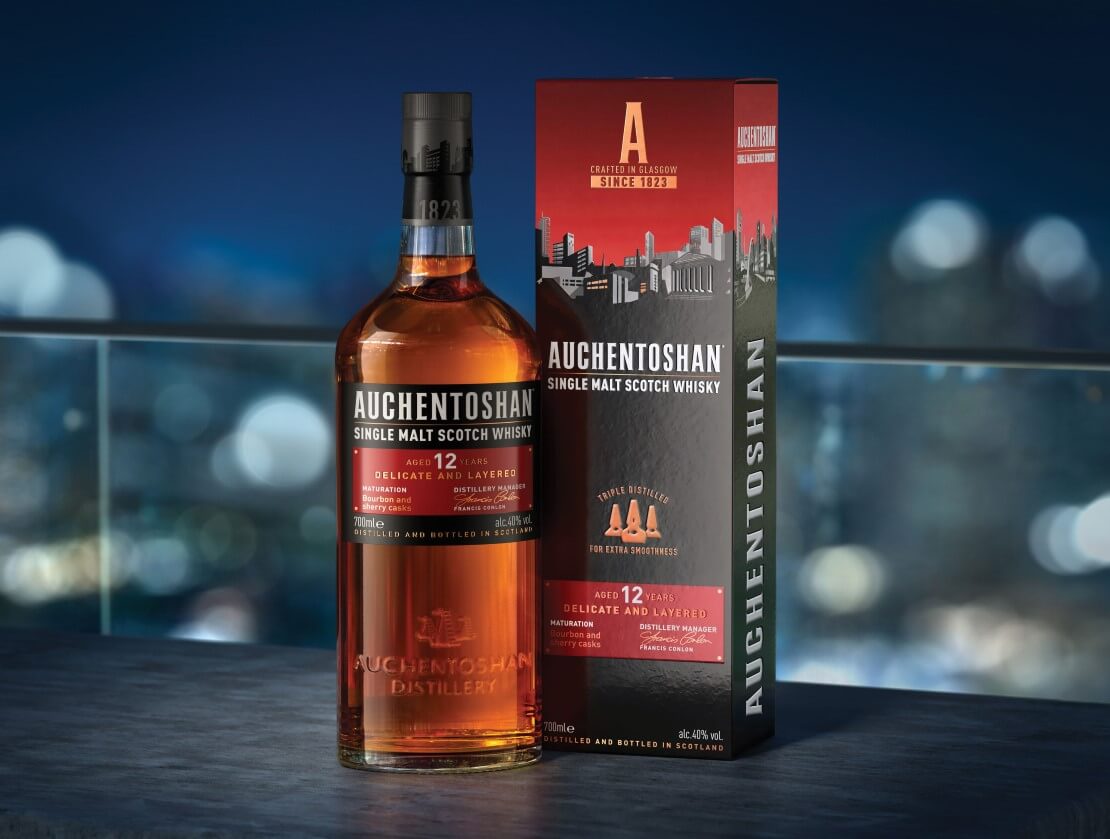