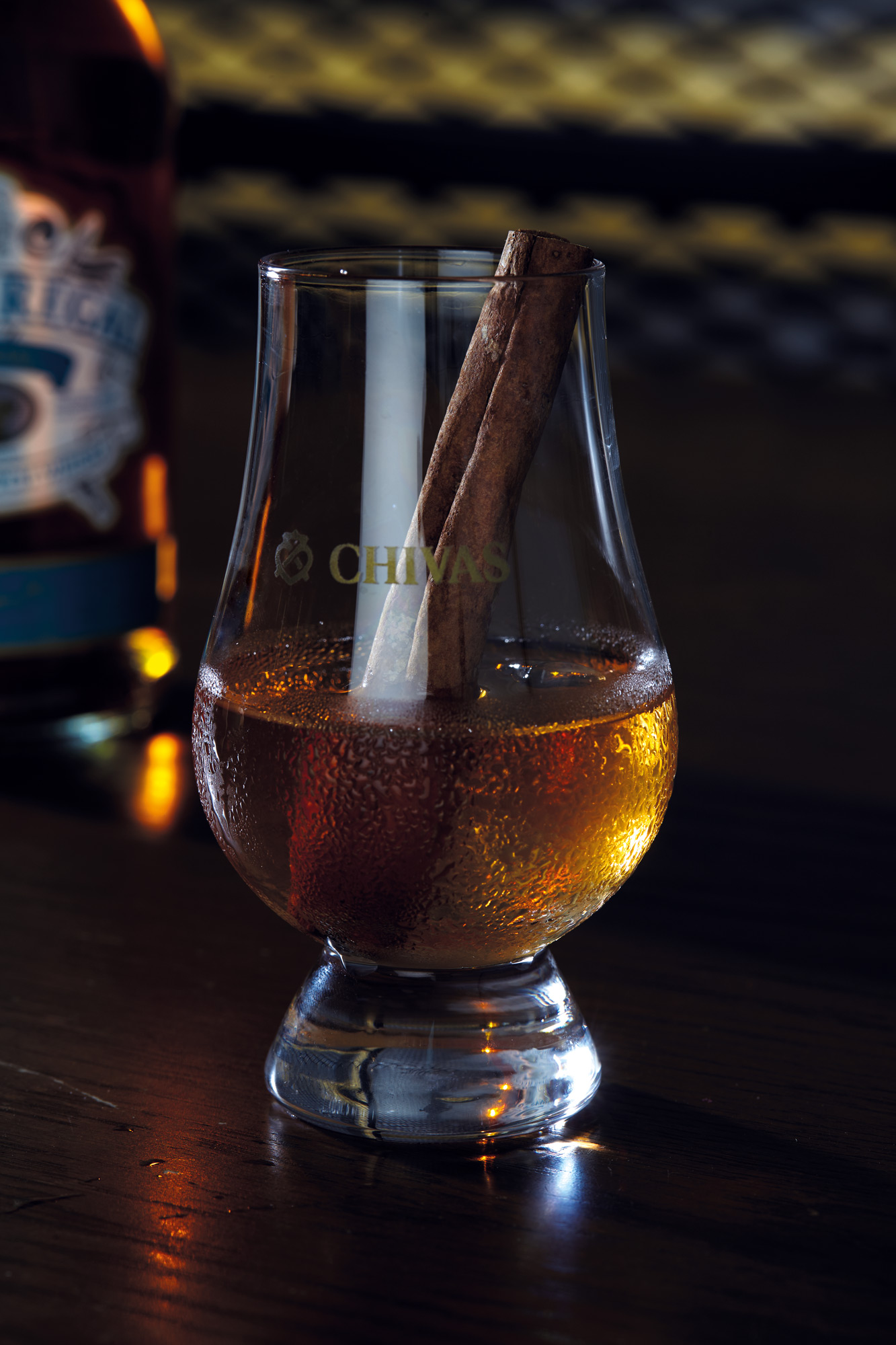 Porsche Goes From Four Wheels To Two With The Porsche EBike Sport And EBike Cross
GearRead More
A Tribute To Britain’s Prince Philip. The A To Z Of The Duke Of Edinburgh
AM SelectRead More
New Tudor Black Bay Fifty-Eight 925 is Edward Cullen, In a Good Way
StyleRead More
Yung Raja Is Rapping His Way To The Top Of Hip-Hop
CultureRead More
Want honest food & drink reviews or handy dining & nightlife guides? We have it all. Sign up to receive it.

Part 2 of this three-part series on easy whisky-based DIY cocktails is here. 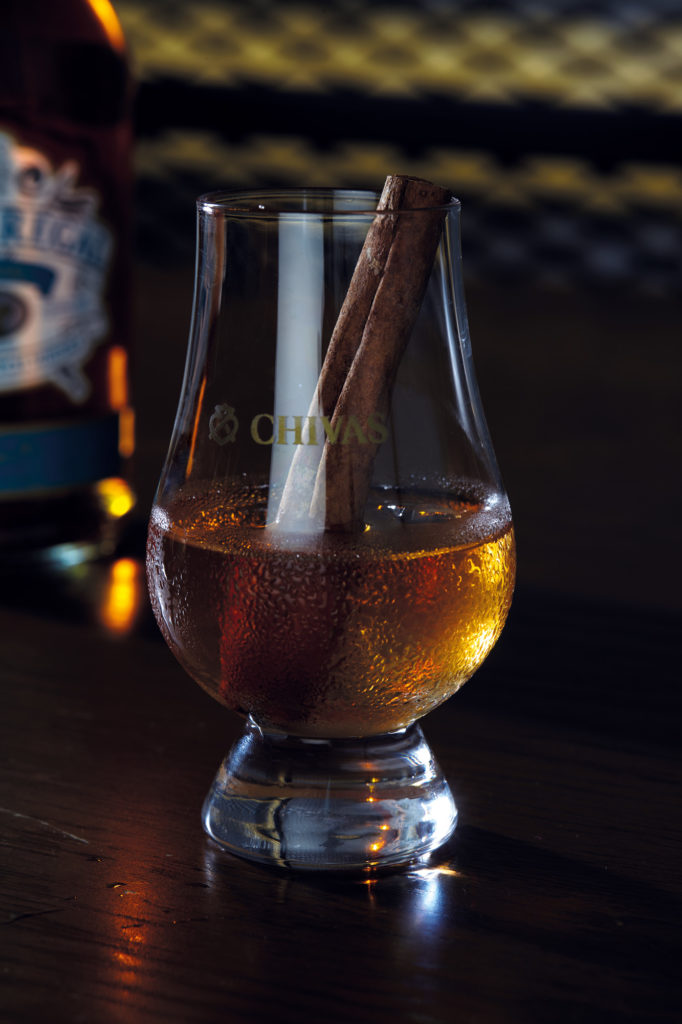 This is the most tedious cocktail to prepare in this guide by a long shot – but it’s also the most rewarding. The process basically infuses an entire bottle of Chivas Regal Mizunara with herbs and spices to create an entirely different concoction that can then be enjoyed on its own, whether on the rocks or as an ingredient in other cocktails

The Burned Butter Chivas Mizunara is strong, and has complex flavours, so it should be slowly enjoyed over a longer period of time. It’s precious too, given the amount of work needed. Save this one for the special occasions and the long evenings with close friends.

HOW TO MAKE IT

1. Melt the butter over a pan, then add in the spices and stir continuously over high heat.
2. Once the liquid darkens and dark specs begin to form in the butter, remove it from the heat and transfer into a freezer-safe container. Let it cool down.
3. Pour the entire bottle of Chivas Regal Mizunara into the same container slowly. Stir continuously while it’s being added.

5. Remove the fats that have settled at the top of the mixture and discard. Strain what remains through muslin cloth, before pouring it back into the whisky’s original bottle for storage.

1. The infused whisky can be enjoyed on its own over a single ice cube, or used in the Old Fashioned recipe detailed above.
2. Leftover whisky can be kept in the refrigerator for up to three months. These six cocktails should prove that cocktail mixing isn’t as difficult as it may seem, and that a perfectly enjoyable drink needn’t take too much time or effort. Here are some frequently asked questions – complete with answers, of course – to serve as the finishing notes (pun fully intended).

The short answer is yes. A cocktail’s tastes and flavours don’t just come from the drink itself, but every other ingredient or element that’s presented with it, from the salt on the rim of the glass to the cinnamon stick sitting in it. Just hold an orange peel up and take a quick whiff – that’s the note your bartender wants on your nose as you’re taking a sip of your cocktail garnished with it. Finishing a cocktail properly with the garnish specified in its recipe is thus essential for completing its flavour profile. In the same vein of things, a cocktail should be served immediately after it’s prepared, while all its flavours are at their strongest.

It’s also worth noting that in bar culture, a cocktail “belongs” to the bartender until it’s been garnished. Before that, the drink you’ve ordered isn’t “yours”; the final act of garnishing a drink signals that it’s ready to be served.

How quickly should a cocktail be finished?

The longer a cocktail sits, the flatter it gets as carbonation escapes. It also becomes increasingly diluted as the ice melts. This doesn’t mean that it’s any less drinkable though – just as how there’re a million ways to mix a cocktail depending on the bartender’s preferences, there are an equal number of ways to drink it depending on your whim and fancy. As mentioned, however, a cocktail should be served “fresh” – immediately after its preparation.

How many types of cocktails can be served in an evening?

Although cocktails have different (or even contrasting) flavour profiles, serving different ones over the course of an evening isn’t a problem if they aren’t drunk simultaneously or in quick succession. Parry suggests keeping to a maximum of two or three different cocktails in one afternoon or evening, lest the myriad flavours end up overwhelming your guests.

One whisky to make them all?

If it isn’t obvious by now, some whiskies lend themselves better to cocktail mixing thanks to their more versatile flavour profiles. The sweeter, better-rounded Chivas Regal 12 is thus the most versatile among the three used in the preceding pages, followed by the Chivas Regal 18, which has stronger flavours that must be brought out with certain cocktails. The Chivas Regal Mizunara, with its particular blend of sweet, spicy, and nutty notes, makes fantastic cocktails – but is limited to very specific ones. If you’re limited to just picking one, then our recommendation is to go with the Chivas Regal 12, since it’s suitable for four of the six whisky cocktails listed here. You could, in a pinch, use it in the River Isla too. We’d advise against substituting the eponymous whisky in the Burned Butter Chivas Mizunara though.