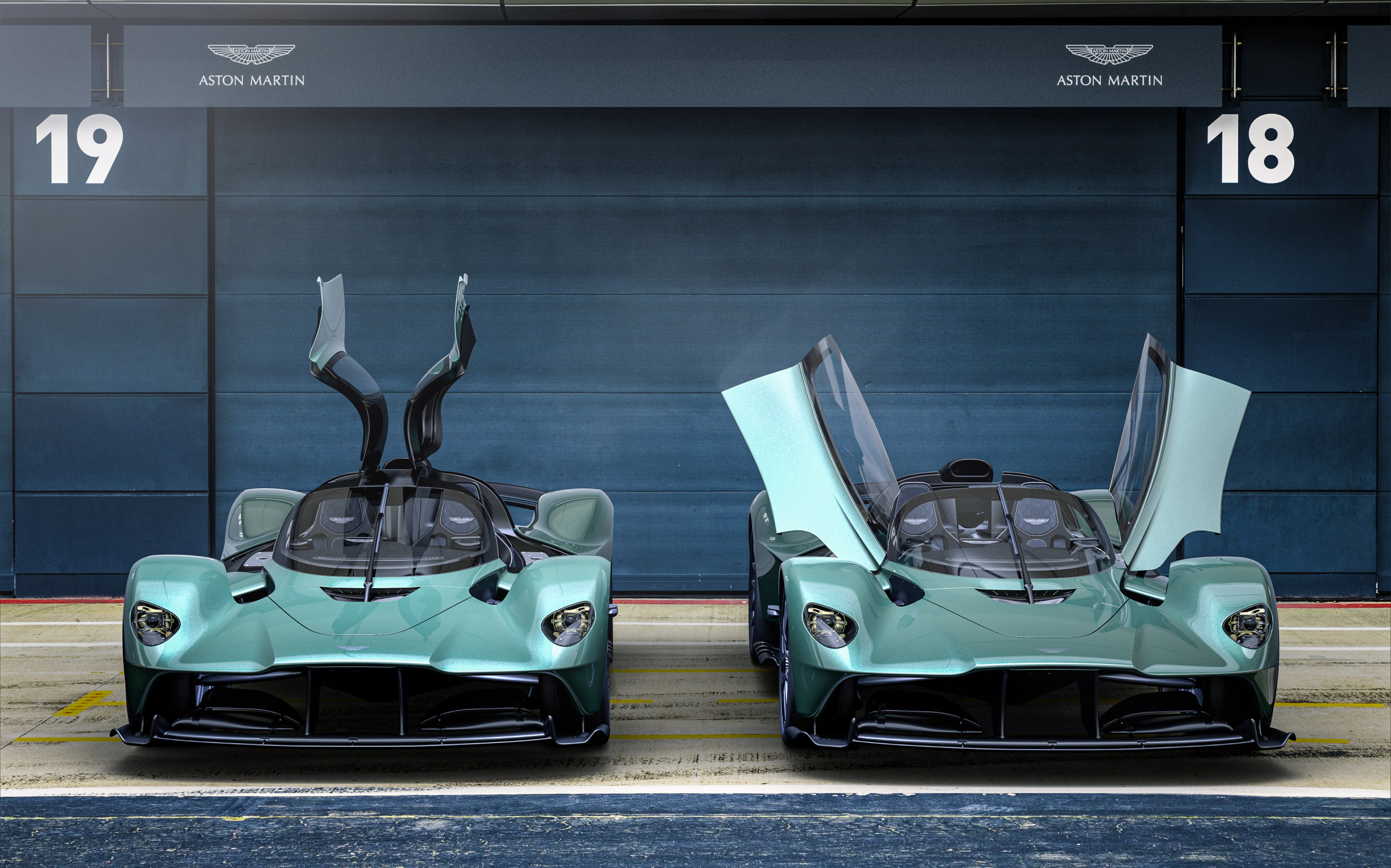 Armed with F1 inspired aerodynamics and performance, the new Aston Martin Valkyrie Spider is pure exhilaration on four wheels. Plus, with a removable roof panel, it also may well be the closest thing to driving a Formula One car on the open road.

The new Valkyrie Spider is a thrilling next step in the progression of the Aston Martin Valkyrie blood line. It stands as the fastest, most extreme open top Aston Martin to date. The cutting-edge model is born from the combined talents of Aston Martin and Red Bull Advanced Technologies (RBAT). 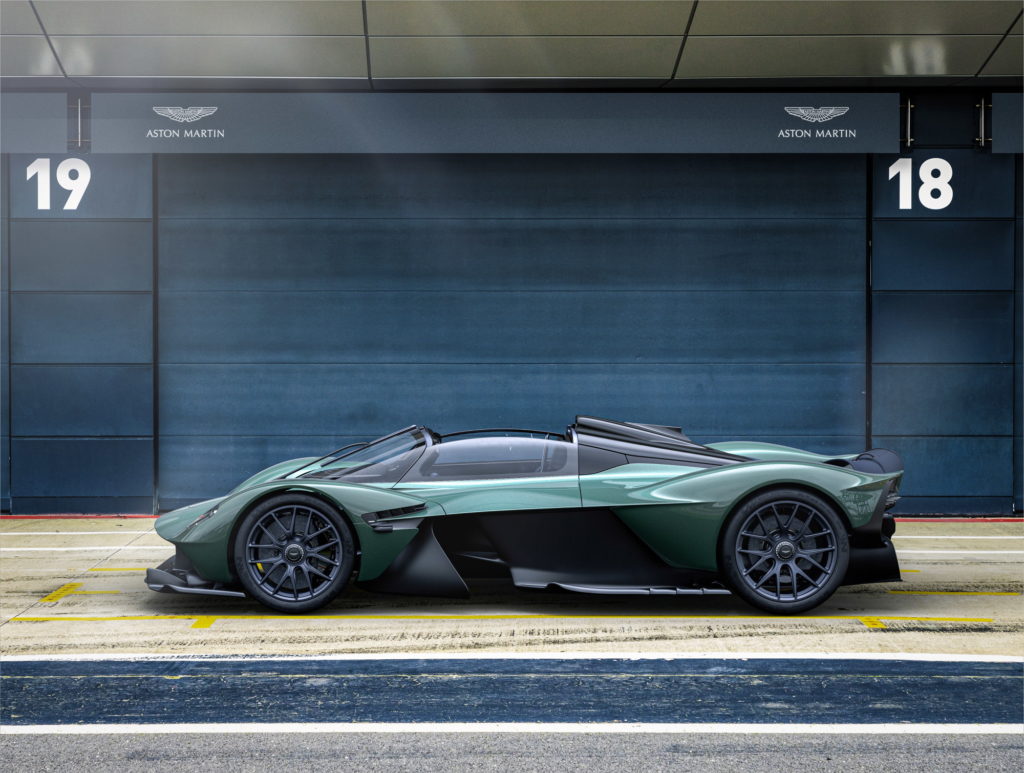 While the Aston Martin Valkyrie’s unique 1155PS hybrid V12 powertrain remains unchanged, the Valkyrie Spider has received revisions to its carbon fibre structure, plus precise recalibration of both the active aerodynamic and active chassis systems.  This affords the hypercar extraordinary levels of downforce – >1400kg at 240km/h in track mode – while keeping the upper body surfaces free from additional aerodynamic devices that would spoil the purity of the open-top styling.

All of this was to maintain optimal Valkyrie performance when driven in a roof-off condition. The pursuit of open-top luxury comes with the challenge of ensuring the core experience remains true to Aston Martin and Adrian Newey’s exacting performance objectives for the original Aston Martin Valkyrie programme. By following the same exacting Valkyrie ethos, and with just a marginal weight difference to the Coupe, Valkyrie Spider remains a quintessential package of efficient and lightweight solutions. Capable of achieving 330km/h+ with the roof removed (350km/h+ with roof on), it stands as the fastest and most extreme open-top, road-legal Aston Martin ever built. 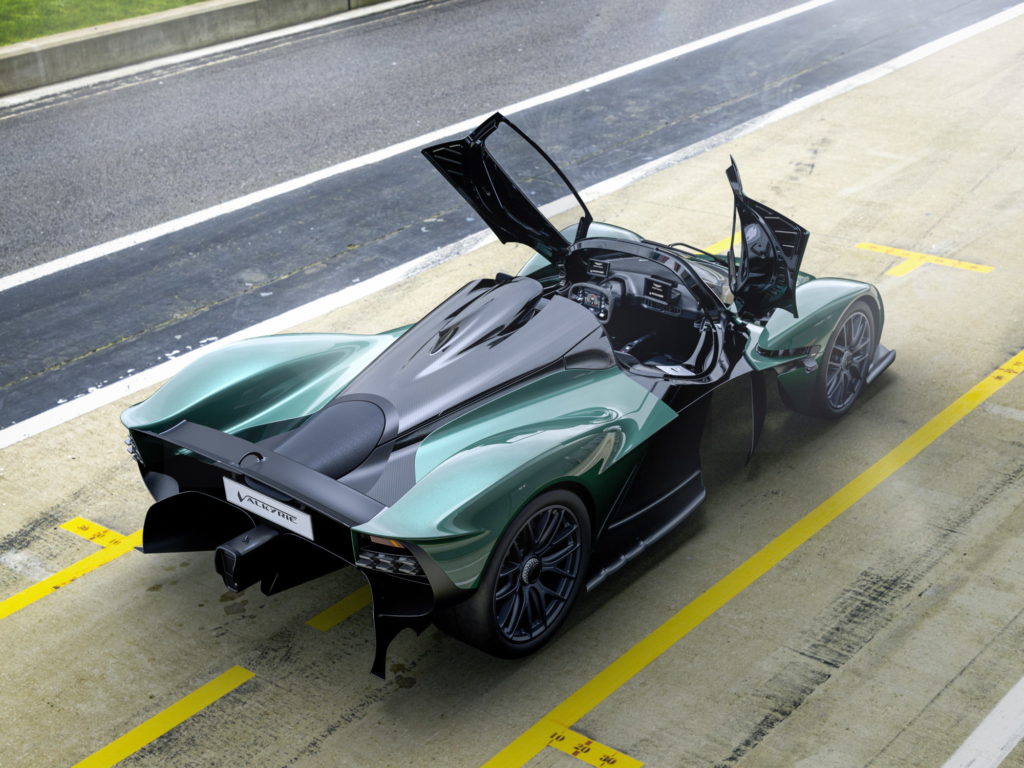 Delivering LMP1 levels of performance, Valkyrie Spider is simulated to set impressive lap times, not normally achievable in a road-going car. The same driver focused cabin sits at the heart of Valkyrie Spider.

F1 inspired low hip-to-heel height and near-central seat positioning, along with a 6-point safety harness to keep the occupants safely in the car. A centre rear-view camera system along with front and rear parking sensors will aid the driver at both high and low speeds, with displays sitting just above the Instrument Panel.

Valkyrie Spider features a bespoke, removable lightweight roof comprising of a carbon fibre central panel. It latches onto the tub at the rear and to the windscreen surround at the front, along with a pair of polycarbonate roof windows, hinged on either side. 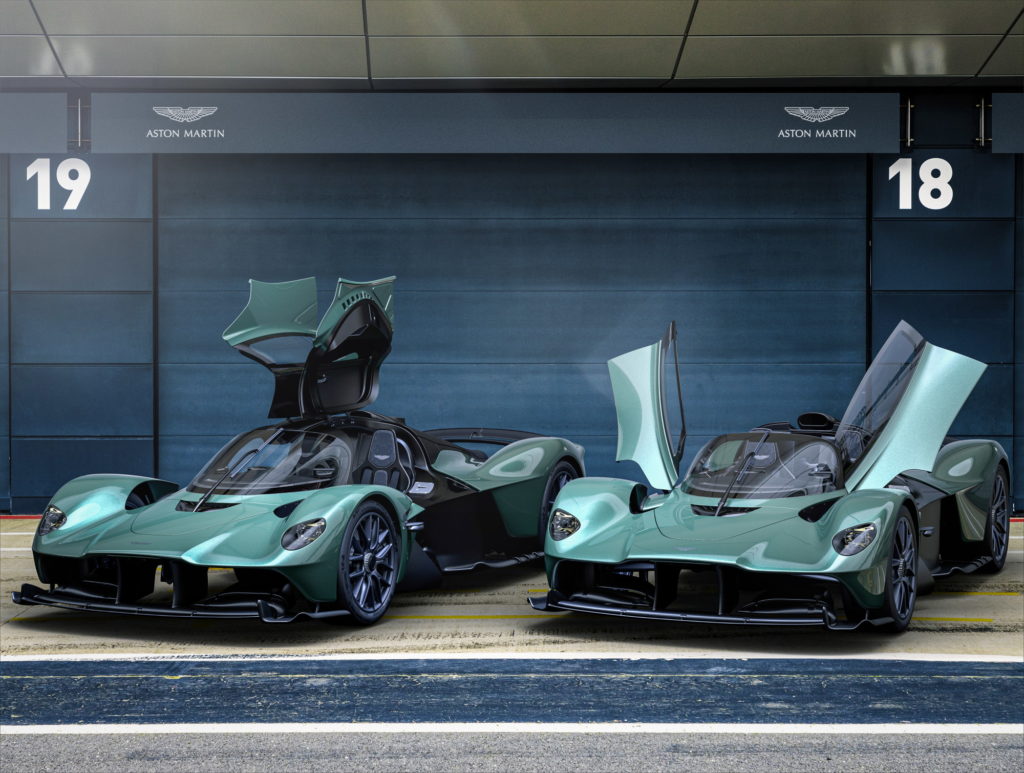 On opening the doors, the roof can simply be lifted off and stowed away. Modifications to the carbon fibre tub have been made to support the removable roof panels and the luxury open-top layout, as well as new doors. The now front-hinged dihedral doors, which are unique to Valkyrie Spider, have been redesigned to tilt forwards.

It looks great and drives like a performance machine should. Unfortunately following unprecedented demand, all 85 examples of the Valkyrie Spider are now oversubscribed. Allocations will begin shortly, available in both left and right-hand drive derivatives, with first deliveries scheduled for second half of 2022. Seeing one in person, would no doubt make for a very cool Instagram post.