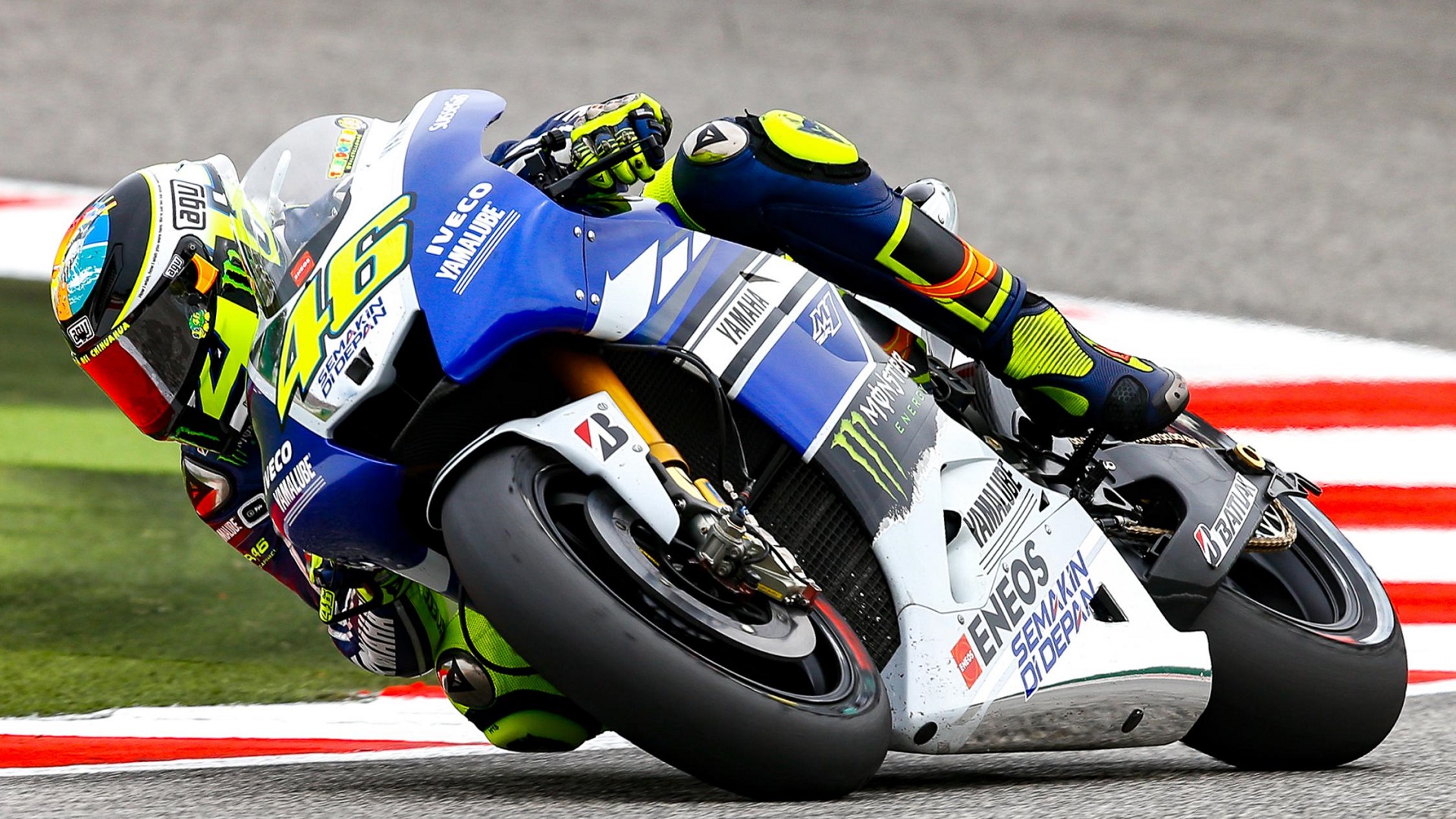 The Grand Prix bikes of Valentino Rossi are as phenomenal as the Italian champion himself. After all, many consider him as one of the greatest motorcycle racers of all time.

Rossi has won nine Grand Prix World Championship titles to date, including seven in the MotoGP/500cc class — the highest class in Grand Prix racing. He is the only biker in history to have won in the 125cc, 250cc, 500cc and MotoGP categories.

Rossi, who is famously known by his nickname, The Doctor, has raced for four motorcycle manufacturers since his debut in the 125cc category in 1996. These names include Aprilia, Honda, Ducati and Yamaha. Having spent the maximum years with Yamaha, he has also won most of his MotoGP titles for the Japanese motorcycle maker.

The Doctor, who has raced his entire career as No. 46, is competing in the 2021 season of the MotoGP class. This is the 26th season for the 42-year-old.

On 5 August, 2021, Rossi announced he will retire at the end of this season. He said, “…it’s difficult, it’s a very sad moment because it’s difficult to say it and know that next year I will not race with a motorcycle, I’ve done that for I think more or less 30 years! Next year, my life will change.”

The Italian legend will always be remembered as one of the best bike racers in the world. And, like his legacy, the Grand Prix bikes of Valentino Rossi will always be known for their association with the icon. We look at all six of the bikes that Rossi rode to become the legend that he is today. 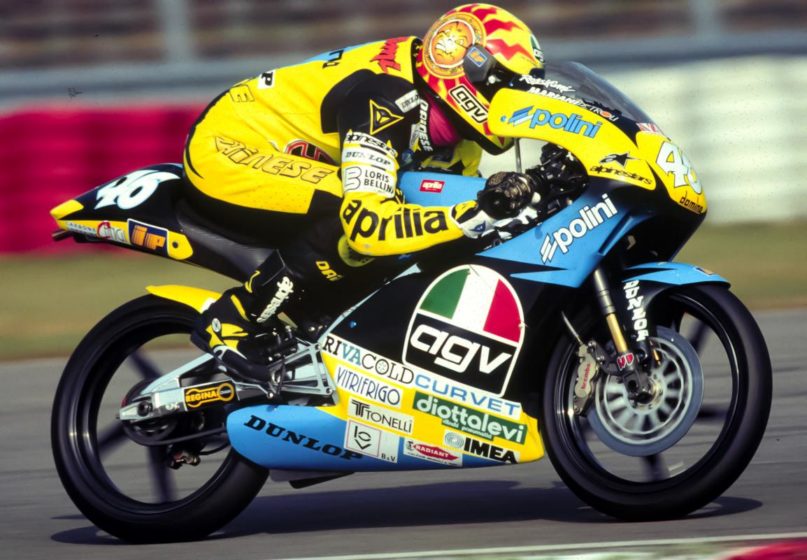 Rossi began his Grand Prix career with Aprilia RS 125 R in 1996. In the 1997 season, he rode the bike to 11 victories and 13 podium finishes out of 15 races in the 125cc class; thus winning the first of his remarkable nine Grand Prix World Championships.

Aprilia was a dominant name in the 125cc class across the seasons of 1992 to 2011 — the last season before the category was replaced by Moto 3. The Italian motorcycle maker, which is now part of Piaggio, had developed the 125cc racing bike in 1988 but could perfect it only ahead of the 1992 season. 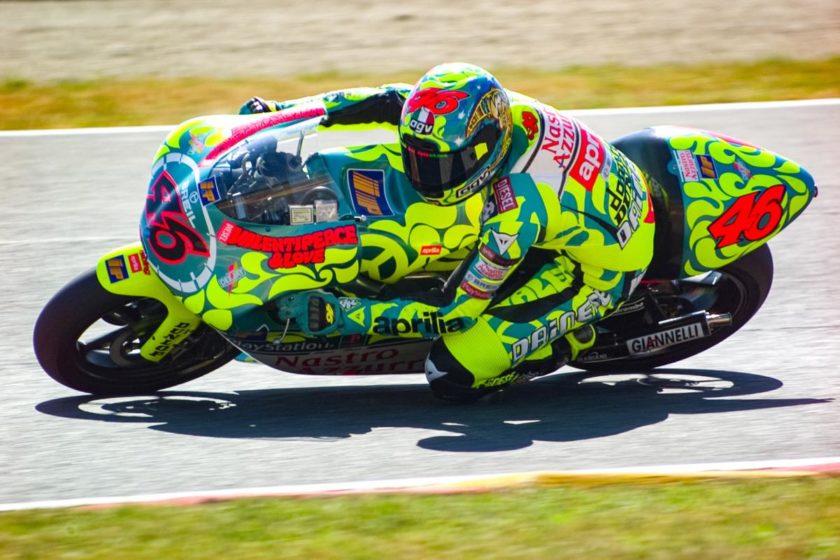 Aprilia had entered the 250cc class in 1985 but its true success began in 1992 when its bike underwent major modifications. Known as AF1 until then, the bike was given a new name — RS250V. The bike ensured Aprilia’s dominance in the category till the end of the class itself with the 2009 season.

Rossi, the winner of the 1997 125cc Grand Prix championship, ascended to the 250cc category in the 1998 season. He ended up taking second place.

In the 1999 season, The Doctor raced the Aprilia RSW250. A 2008 variant of the same bike had a 90-degree V-Twin two-stroke engine producing around 110HP. Rossi won the season — his first 250cc title and second Grand Prix World Championship.

After his win, Rossi left Aprilia for Honda — the Japanese motorcycle maker with whom the Italian would go on to rewrite history. But the bike, too, has its glory of being ridden by legends such as Max Biaggi, Marco Melandri and Jorge Lorenzo before and after Rossi. 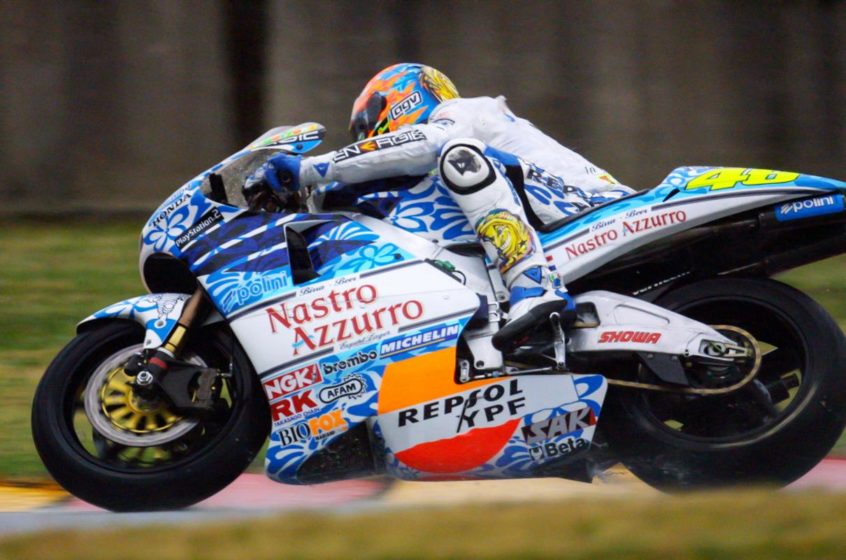 Honda NSR500 is the bike with which Rossi began his stellar record of victories in the premier class of the Grand Prix motorcycle racing.

When Rossi won the 500cc title at the end of the 2001 season, it was his first in the category. He also became the last rider to win the title in the 500cc two-stroke class as it was renamed MotoGP from the 2002 season, and the 990cc four-stroke bikes were introduced. Rossi also rode the bike to Honda’s 500th World GP victory at the Japanese Grand Prix in the 2001 season.

The Honda NSR500 made its debut in the 1984 season and was an instant hit. It remained a dominant force in the top flight of motorcycle racing till the end of the 500cc era and is still considered the most successful premier-class machine of all time.

The bike won more than 130 Grand Prix races — including all 15 in the 1997 season — and a combined 21 riders and constructors world championships, of which six were straight season wins from 1994 to 1999.

The NSR500 and its 250cc version created a unique record for Honda, becoming the champion of both the 500cc and its next lower division (the then T250cc) of the Grand Prix motorcycle racing the same year when Freddie Spencer won both titles in the 1985 season — a feat not repeated by any other manufacturer or rider since.

Though the machine remained largely unmodified for 19 years, a crucial change was made in the positioning of its fuel tank. In 1984, the tank of the Honda NSR500 was located below the engine to reduce the centre of gravity. However, it didn’t work as expected and the positioning was switched to the conventional style in 1985.

The Honda NSR500 was equipped with a liquid-cooled 2-stroke V-4 Case Reed Valve engine. It had a 6-speed transmission. 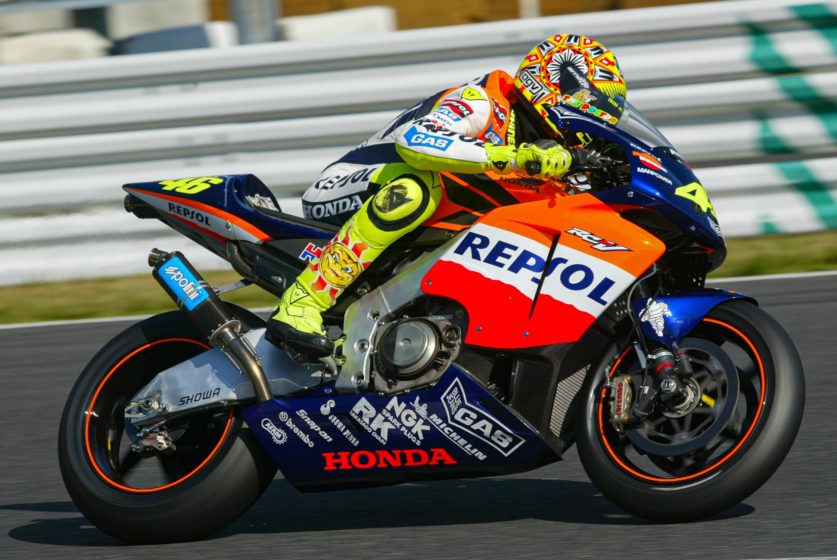 The bike is hailed as the first champion of the new MotoGP era. Rossi raced a Honda RC211V in the 2002 and 2003 seasons, winning both. 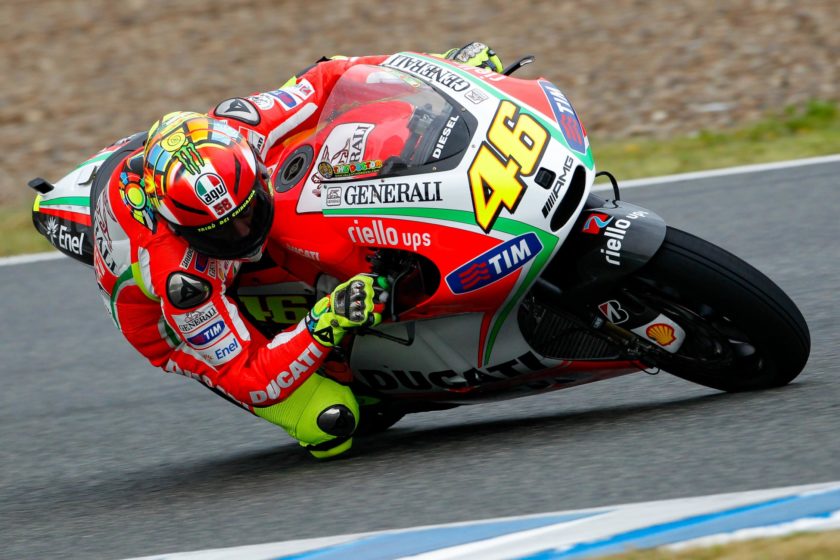 Rossi joined Ducati ahead of the 2011 season for a two-year deal. It was an exciting move in motorsports as Rossi was about to race for an Italian automaker after years.

However, the two seasons were terribly frustrating for The Doctor. He could not win a single race and bowed out of Ducati to join Yamaha for the 2013 season. (He would eventually have his first win since 2010 at the Dutch Grand Prix in 2013.)

Following an announcement of his departure from the team, Rossi took to Twitter and posted a series of tweets written in Italian on 14 August, 2012. He expressed “shame” and said “sorry” for his performance with Ducati.

A translation of a part of the tweets read, “It has been a real shame that I have not been able to be competitive with the Ducati, it would have given me great satisfaction, as well as to all the guys who have worked with me and who will be working right to the end. And it would have been great fun for all of our fans. I am sorry.”

The Ducati that races on the MotoGP circuit today is a 1000cc liquid-cooled, 90° V4, four-stroke engine bike that produces 250HP. 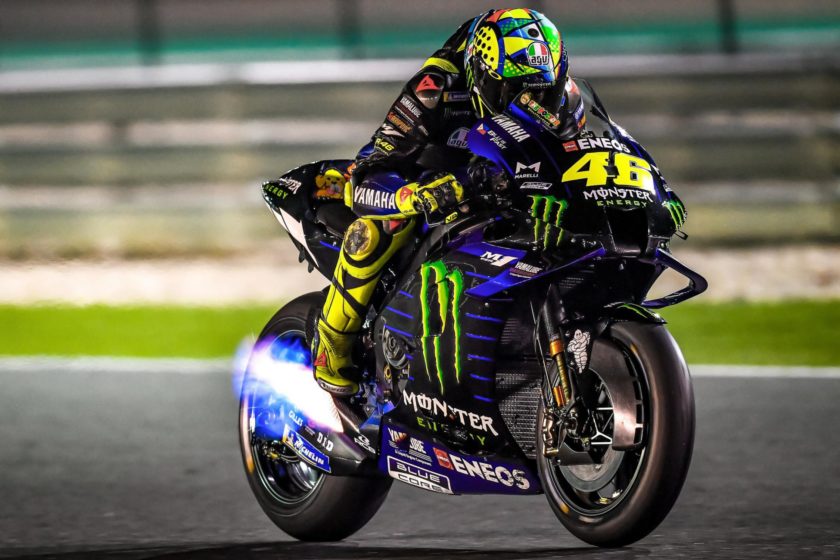 Currently, Rossi rides the Yamaha YZR-M1. The bike is a monster of a machine. Its recent specifications include a 1000cc liquid-cooled in-line four-cylinder engine, which delivers 240HP. It has a six-speed transmission.

The first variant of the bike was launched in 2002 when the sport’s governing body, Fédération Internationale de Motocyclisme (FIM), introduced a series of changes to rules, including the renaming of 500cc class to MotoGP and allowing four-stroke bikes of up to 990cc to race in the category.

After leaving Honda, Rossi joined Yamaha in the 2004 season.

According to Yamaha, he tested multiple engines before he selected one that he simply called “sweet”. He won his debut race for Yamaha at Welkom, South Africa, and went on to win the MotoGP season championship.

The biker expressed his love for Yamaha YZR-M1 when it was announced in 2010 that he would race for Ducati starting with the 2011 season.

“At the time she was a poor middle-grid position MotoGP bike, derided by most of the riders and the MotoGP workers. Now, after having helped her to grow and improve, you can see her smiling in her garage, courted and admired, treated as the ‘top of the class’,” The Guardian quoted Rossi as saying about the bike.

After a brief spell with Ducati, Rossi returned to Yamaha for the 2013 season and has since been racing with them. He is set to retire at the end of the 2021 season next year.