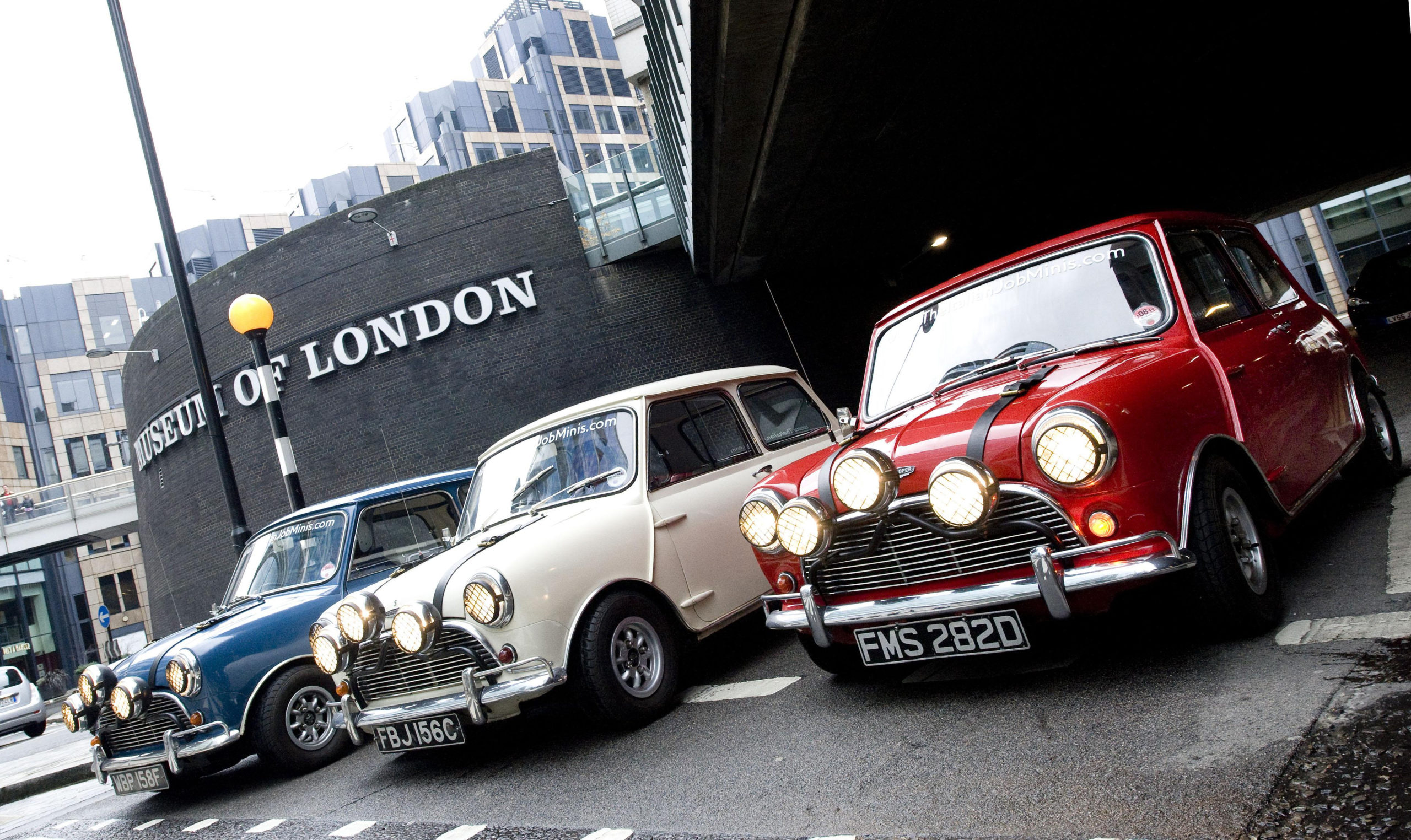 This month, we foresake the driving seat for the front row in a multiplex to reel through some classic films in which automobiles play a leading role.

In 1886, the German inventor Karl Benz patented his first motor car, an event that’s generally regarded as marking the birth of the automobile industry. Nine years later, in Paris, the brothers Louis and August Lumière held a public screening of 10 short films, an occasion that’s widely accepted as the beginning of the commercial cinema.

Fast forward another 10 years, to 1905, when the Nickelodeon Theater in Pittsburgh was showing a daily programme entirely composed of films. By that time, the Oldsmobile company had already begun manufacturing motorcars on the world’s first production line, an innovation further refined in 1913 when Henry Ford introduced the moving production line at his factory, a system that remains widespread in motor manufacturing to this day.

The automobile and the cinema not only grew up in tandem, but both were also to become defining aspects of the 20th century. Just as the car transformed society, broadening physical horizons and liberating people by enabling them to travel where, when and how they wanted, the explosion of the moving image so redefined art and communication that the cinema – and, of course, its progeny, television – can plausibly be regarded as the art form of the last 100 years or so.

Given that they grew up alongside each other, it was almost inevitable that a deep mutual love affair would develop between motors and movies. Whereas the automatic washing machine was another transformative invention of the last 80 years, it’s hard to recall any films in which a Bendix, Hoover or similar domestic appliance played a key role. Cars, on the other hand, have figured prominently in so many movies that they might almost be considered among the main protagonists – indeed, in the case of the 1968 comedy The Love Bug (’63 VW Beetle), the 1977 horror pic The Car (a modified 1971 Lincoln Continental Mark III) or the more recent Fast and Furious and Cars franchises (far too many models to count), the automobiles are the stars.

So what exactly constitutes a car movie? The obvious ones, of course, are the films in which autos play a key role, and from those I’d suggest that the 1985-90 Back to the Future trilogy – which isn’t really about automobiles at all – features as a central character one of the most interesting machines ever captured on celluloid. It is, of course, the infamous DMC DeLorean, a two-seat coupe with gull-wing doors of which some 9,000 were built in the early ’80s. (The infamy derives from the fact that the company went spectacularly bust, after which its founder, an American engineer of the same name, was arrested and charged with cocaine smuggling. He was eventually acquitted, but by that time DeLorean’s reputation was in ruins.)

Although interesting in appearance – the body styling was by the great Italian designer Giorgetto Giugiaro – the DeLorean in real life was underpowered and a mediocre performer: the former Top Gear script editor Richard Porter went so far as to include the “dismal” coupe in his 2004 anthology Crap Cars. However, the combination of novelty and notoriety helped give it a new and rather dazzling lease of life by appearing in all three Back to the Future films where, instead of travelling stylishly at speed on the highway, it transports its occupants Christopher Lloyd and Michael J. Fox backwards and forwards through time.

With the long-awaited premiere of No Time to Die, the 25th James Bond film from the Eon Productions company, images of 007’s Aston Martin DB5 have been almost as prevalent as those of its star, Daniel Craig. Indeed, in the public imagination the Aston has become inextricably linked with Bond since it first appeared in 1964’s Goldfinger – with the plate BMT 216A, the car has even outlived its original human co-stars Sean Connery, Honor Blackman and Gert Frobe.

Although the DB5 was the first of many Astons to appear in Bond movies – 007’s latest outing also features a DBS Superleggera and a pre-production Valhalla – one can’t help wondering what the character’s creator, Ian Fleming, would have thought of it. Fleming, who was somewhat ahead of his time when it came to branding, was absolutely clear about the products his character would use. Thus, the literary 007 drove not an Aston but a 1931 4.5-litre Bentley with a Villiers supercharger (though he did once borrow a DB3 from the MI6 car pool), followed in later novels by a Bentley Continental, just as he drank Smirnoff, Gordon’s, Taittinger and Veuve Cliquot, smoked Morland cigarettes and wore a Rolex (and definitely not an Omega) on his wrist. (Aside from a brief mention of Miller High Life, of all brews, in Diamonds Are Forever, Bond’s preferred brand of beer isn’t mentioned in any of the novels; I somehow doubt it would have been Heineken.)

Astons excepted, among the more interesting cars to have appeared in the cinematic 007 oeuvre are the Lotus Esprit, a lightweight British mid-engine coupe of the mid-’70s that, in The Spy Who Loved Me (1977), dives into the ocean and transforms into a submarine, and a gorgeous prototype BMW Z8 convertible driven by then-Bond Pierce Brosnan in The World Is Not Enough (1999), as part of a three-movie deal with the German manufacturer.

Bond aside, car chases have become an indispensable component of the action-movie genre and though many are lame and predictable, the best are capable of wrenching both metal and guts. Director John Frankenheimer’s Ronin (1998), starring Robert De Niro and Jean Reno, is among the finest, featuring no fewer than three, whose realism can partly be attributed to the fact that genuine racing drivers were employed to drive the cars. In a lengthy sequence on the streets of Paris, De Niro commandeers a Peugeot 406 to chase Natascha McElhone and Jonathan Pryce’s BMW 5-series down footpaths, and through tunnels and oncoming traffic, culminating in the Beemer’s demise off the end of an unfinished flyover. Later in the film, a chase in the hills and streets of Nice involves three cars: a Mercedes 450 SEL, a Citroën XM and an Audi S8, the latter one of the great German muscle sedans of the late ’90s.

Interestingly for fans of the Mercedes 450 SEL, another over-engined luxo-barge from Germany, a 6.9-litre V8 version is the unseen star of the short 1976 film C’était un Rendez-Vous by the French director Claude Lelouch (probably best known for his 1966 movie Un Homme et une Femme), which depicts a car-bumper’s view of a high-speed, early morning dash on a 10.5km route through the French capital, the destination being Montmartre and a date with a young woman. It’s said that the car-buff Lelouch did the driving himself, at speeds of up to 200km/h, then dubbed the engine sound and gearchanges of his own V12 Ferrari for increased dramatic effect.

Indeed, Paris has been the setting for several classic high-speed chases, including the sequence in The Bourne Identity (2002) in which Matt Damon drives a Mini through the city while pursued by police cars and motorcycles, most of which come to the inevitable sticky end. Arguably even better is the chase through Moscow in the 2004 follow-up, The Bourne Supremacy, this time with Damon’s Bourne character at the wheel of a Russian GAZ taxi – an unlikely vehicle for such a scenario if ever there was one – and the villain, played by New Zealand actor Karl Urban, driving a Mercedes G-wagon. No need to guess who comes off best, even if it is a close-run thing.

And talking of Minis – the proper Mini, I mean, not the current bloated pastiche – it’s arguable that the three Cooper Ss filled with loot that escape through the sewer tunnels of Turin (though the sequence was actually filmed somewhere in the British Midlands), were the real stars of the 1969 heist caper The Italian Job, rather than Michael Caine, Noël Coward, Benny Hill and Rossano Brazzi. Among other memorable scenes in the movie is the Mafia bulldozing of a Lamborghini Miura into an Alpine gorge, an act of apparent wanton destruction viewed with horror by auto buffs everywhere. In reality, the car had been seriously damaged in a previous accident and was deemed irreparable; other classic automobiles also supposedly wasted in the film (but weren’t) included a pair of E-Type Jaguars and an Aston Martin DB4, which was also seen being pushed over a cliff.

I could go on, because a history of cars in cinema is almost a filmed timeline of the automotive industry itself. There were rididulous cars, such as Herbie, the racing VW Beetle in The Love Bug, and the appalling AMC Pacer, one of the worst automobiles ever to have come out of the United States, in which Wayne Campbell (Mike Myers) and Garth Algar (Dana Carvey) memorably headbang to Queen’s “Bohemian Rhapsody” in Wayne’s World (1992), not to forget the flying vintage car created for the fantastical 1968 musical Chitty Chitty Bang Bang. Little-known factoids are that the latter auto was named after a real machine raced by one Count Louis Zborowski in the 1920s, and the film was based on a children’s book by James Bond’s creator, Fleming.

There were racing cars, too, including replicas of 1960s Ford GT 40s and Shelby Cobras, as well as Fezzas galore, in the critically acclaimed Ford v Ferrari (2019), starring Damon and Christian Bale, while almost half a century earlier the Hollywood star Steve McQueen, whom in reality wasn’t a bad racing driver, attempted to capture the action and atmosphere of the 24-hour race in the 1971 movie Le Mans. Unsure as to whether it was a drama or a documentary, the film succeeds as neither, though the sequences of Porsche 917s racing Ferrari 512s are admittedly superb

And there were also cars to swoon over, such as the exquisite, boat-tailed red Alfa Romeo Spider driven by Dustin Hoffman in The Graduate (1967), and the equally beautiful Ferrari 250 GT California Spyder that featured – and was destroyed – in the 1986 teen comedy Ferris Bueller’s Day Off. Again, it wasn’t a real car that was demolished in the movie, but a replica.

For me, though, if there’s one film that typifies the “car movie”, it must be The Yellow Rolls-Royce, a 1964 romantic drama with a script by the celebrated English playwright Terence Rattigan and an ensemble cast that includes Rex Harrison, Ingrid Bergman, George C Scott, Shirley MacLaine, Omar Sharif, Jeanne Moreau and Alain Delon. Set in the 1930s and the early years of World War II, the narrative follows the lives of three very different owners of the car – a genuine 1931 Rolls-Royce Phantom II Sedanca de Ville, which still appears in concours events to this day – in locations as diverse as England, Italy, Yugoslavia and the United States. According to The New York Times, the film was “a pretty slick vehicle, that is pleasing to the eye and occasionally amusing … One is reminded of the now-classic Rolls-Royce advertising slogan, ‘The loudest noise comes from the clock.’”

Which is exactly how we want our cars to be these days, isn’t it?