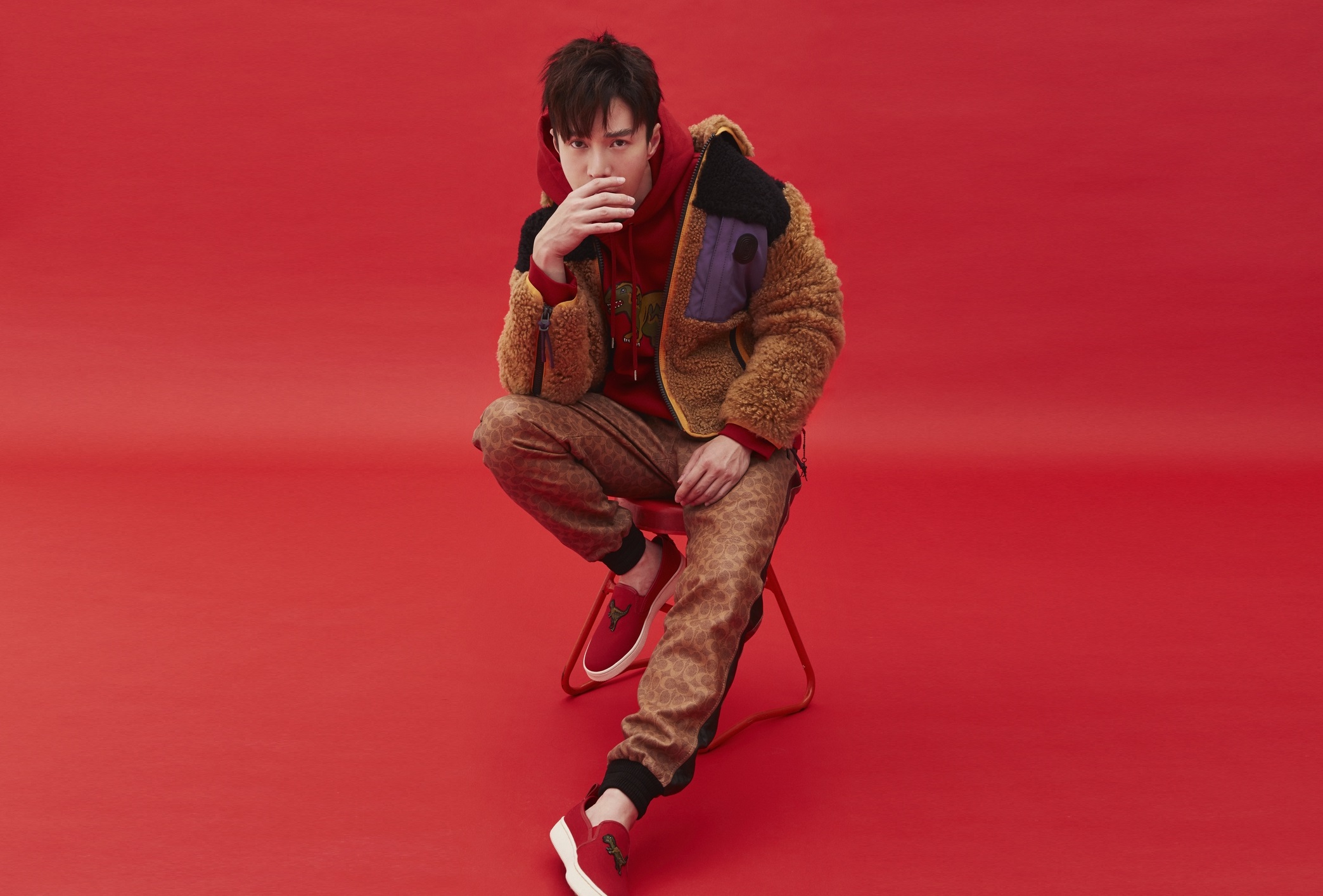 WITH his professional portrayal of an amiable palace guard in hit Chinese period drama Story of Yanxi Palace, Lawrence Wong bagged two international awards in the US: Asia’s Most Promising award at the 2018 Asian-American Television and Film Festival Golden Oak Award ceremony, followed by the Best Supporting Actor award at the 14th Chinese American TV Festival.

Come July, Wong will be making a comeback to the local scene with his first lead role in Channel 8’s “My One In A Million”.

In our tongue-in-cheek interview with the Malaysia-born actor, Wong teases a new Chinese film that he will be starring in, his undying love for bak chor mee and his simple, relatable fashion sense.

AM: Firstly, congratulations on the international and regional awards you’ve won. How does it feel being on an international stage and putting our small island on the world map?

Wong: Thank you. I don’t really dwell on it so I don’t feel anything special. But there have been quite a number of people who have asked me this question – so I started to think about it. Then, yeah, if you really think about it and put things into perspective, I am pretty proud of what I have achieved.

I mean, I started in this industry… right from the bottom. I wasn’t with the TV stations. I didn’t have a huge backing from any company. No one groomed me. I was literally the “calefare”. And after so many years, I finally got to this stage… it’s been a while since people know about Singapore after the whole Stefanie Sun era. I’d say I am pretty proud of things.

But again, if you don’t ask me, I wouldn’t even think about it.

After a long hiatus, you will finally be marking your return to local screens. What does this mean to you personally?

Plain and simple, I just hope to do a good job for the role. People already know me for what I can do and what I cannot do, it’s, again, not something that I think about.

Do you see your acting skills mature over the years too?

I think I am definitely more aware of my craft and it’s something that I’d love to improve on. Being good at your job is very important. It’s everything actually. It’s the one thing that will determine if you will last long in the industry.

Throughout the years, I think my craft has improved and (I’ve) matured. I feel more for it as well. I am better at seeing things beyond the surface level, and that helps with my craft.

Meanwhile, you will be starring in another Chinese movie.

It is a very different act for me because I will be playing the role of a poor villager. They had qualms about casting me initially because I look too modern and…. rich. (laughs) They just found it hard for me to have the villager look.

The villager that I am playing (will) also be an opera singer – so I have to learn how to sing.  It’s pretty interesting. The show is actually about Chang-e (the Chinese goddess of the moon).

You are a natural when it comes to acting.

How about memorising lines?

(It’s) quite easy for me. But after I went overseas, I realised the lines were harder to memorise somehow, because of the way they speak. Over here, everything is more localised and more colloquial; often I don’t really have to remember (lines) word for word. But over there, it has to be word for word.

I actually did a Thai show before in Thailand, and I shot (over) one  year, so every month I had to go Bangkok for four days – one day for one episode. And I didn’t even know Thai but I had to act/speak in Thai.

Plus, my script was ‘special‘. They had to write han yu pin yin (phonetics) for me. So my script only got to me the night before, and I only had one night to quickly remember it all, so that I could ‘vomit’ it out on set (the next day). So I guess memorising has never been a problem for me.

Your favourite genre to act in is…

I’d love to try all genres, honestly. If you have been doing modern drama for awhile, you (get) this urge to do a period drama. And if I do period drama after period drama, I’d crave to do modern shows next.

I’d love to do some police-and-thief show, or star in an action movie like Marvel’s. Those would be really cool.

If weren’t an actor, what do you see yourself doing?

Maybe… a vet? I like animals and if I could do something for them, that would be great.

I mean, I like fashion, I like beautiful things and clothes, but I am not crazy for them like some fashion influencers who really follow the scene, read up and do their research. I really am not.

People also look up to you for your fashion style now.

It’s crazy because – I mean, I like fashion, I like beautiful things and clothes, but I am not crazy for them like some fashion influencers who really follow the scene, read up and do their research.

I really am not.

So I think it’s kind of by chance or luck that people see me as (a fashion icon). But I guess it’s also because I know my body type and body shape really well. Sometimes you dress to enhance your (strengths) and hide your flaws.

And who do you look up to?

Well, I think Kim Jones is very classy – he still pushes boundaries but never overdoes it. He is not tacky. He always has a tinge of elegance and classiness about him — that’s what I like.

Tell me more about your personal style.

I’d describe my fashion style as something relatable to people on the streets, but at the same time, pushing boundaries.

In Singapore, it’s T-shirt and jeans. I mean, you simply cannot do much purely because of the weather. In China, you can do so much more. You can wear really nice sweaters with nice deconstructed shapes, you can wear oversize jumpers and vests — so many more combinations!

Maybe Spring or Autumn, when it’s not too cold but not too hot as well. I just love sweaters and pullovers because they are comfortable and easy to put on, especially in cold weather. They are functional, and there are so many designs nowadays with different shapes and materials. These days I put more emphasis on the cutting and material of the garment, as opposed to previously.

I also always experiment (with clothing) out of my comfort zone, whether it’s at magazine shoots or events. Stylists always give me things that are very outrageous (laugh) but I am always open to try them.

But if you ask me about my everyday wear, I tend towards the safer side of things.

Speaking about China, what Singaporean food do you miss the most there?

Bak chor mee (minced pork noodles). My one and only favourite. In China, you still can find chicken rice easily. But you can never find bak chor mee. Anywhere else you go, you might still be able to find Singaporean cuisine, but it’s hard to find bak chor mee.

You talked about the possibility of opening a food stall?

Now? I am too tired. I’d rather just kiao kah (shake leg) at home.

But what would you sell?
Bak chor mee? (laughs) I heard the profit margin for bak chor mee is very high. After all, it’s just minced meat and noodles. Or maybe I should sell roti prata.

You are also looking at releasing a music single this year?

I am trying to. (laughs). Trying to find the time to record it. I always try to release a song a year if I can, and every year, I will have different ideas.

This time, I also hope to have something fresh. Previously, my songs were a bit more alternative and not too mainstream. But this year, I was telling my music producer that maybe we should do some sweet love song that is more mainstream.

My music is also a way for me to chart my growth and reflect the messages I want to bring across. Let’s face it: music can’t earn you much money nowadays. If you’re heading for the international market like Taylor Swift, fine.

But for me, (making music) is a blessing; knowing I don’t have to do or produce things that are supposed to be for the market or to be profitable – it’s just doing what I like to do.

If I feel strongly for a certain message, I’d be like, “Hey, let’s make something out of this!” My music is really a reflection of who I am and what I like.

Any goals for yourself?

I don’t like to think so much. But I guess I do have certain goals in mind — like doing better shows, (and) hoping to work with better teams and more experienced actors.

I just want to do to my best whatever I have on hand, and then head towards that direction.

Louis 200: Louis Vuitton Celebrates Its Bicentennial Through A Series Of Creative Initiatives