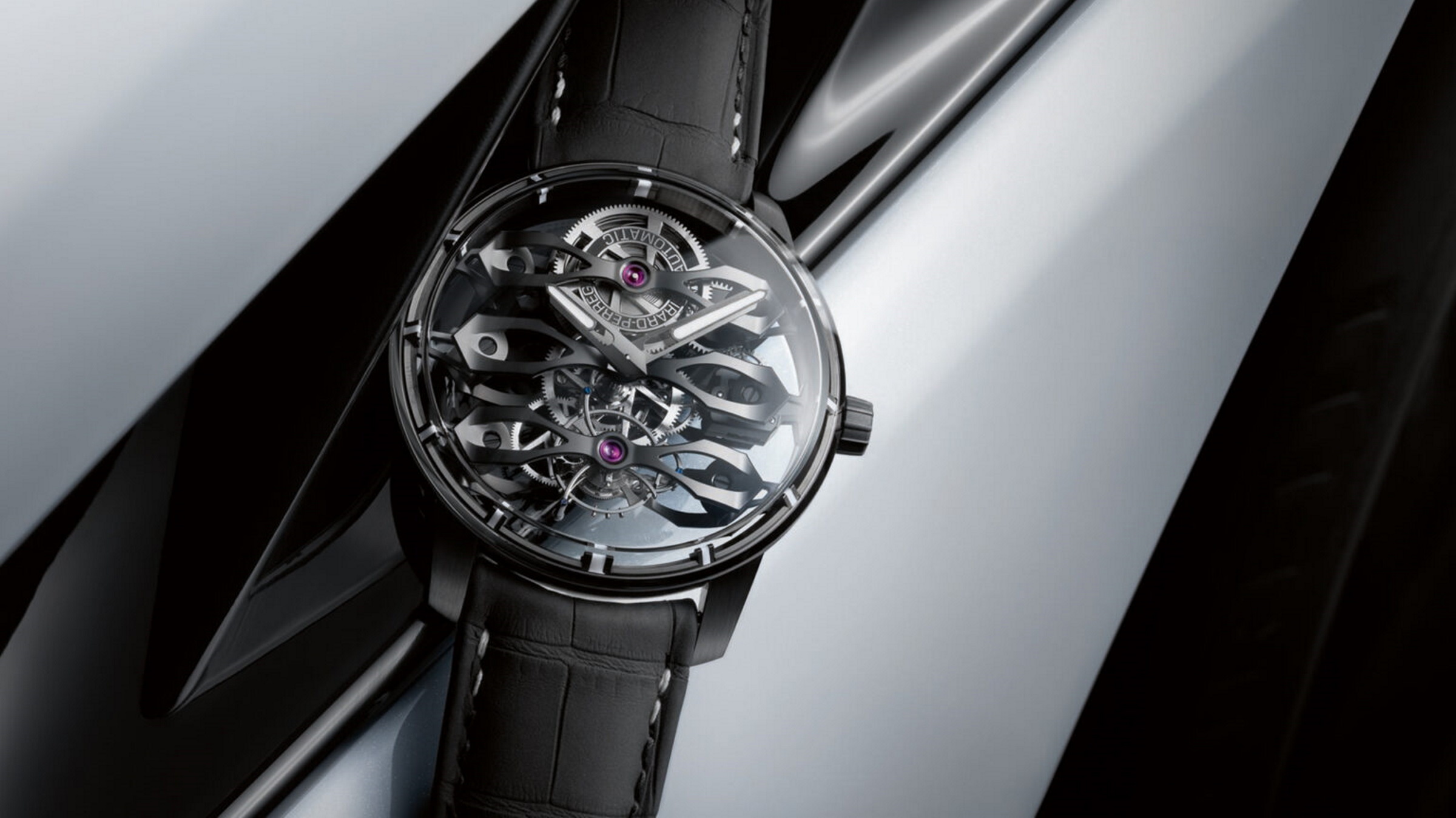 When the world of cars crosses paths with the world of horology, the results can be impressive. Case in point, the Tourbillon with Three Flying Bridges – Aston Martin Edition, which is a result of a collaboration between Girard-Perregaux and Aston Martin.

In February both brands announced a partnership that would combine the watchmaking expertise of Girard-Perregaux with Aston Martin’s unique knowledge of luxury and performance. Now that collaboration has given birth to Tourbillon with Three Flying Bridges – Aston Martin Edition.

It goes without saying that Girard-Perregaux and Aston Martin share a passion for refined craftsmanship. This includes a deep understanding of design, materials, and technology. Those elements come to the fore of the new timepiece, which celebrates the iconic Three Bridges pocket watch from the 19th century.

The Three Flying Bridges – Aston Martin Edition reimagines that vintage timepiece in a contemporary way. It features a 44mm case made from Grade 5 titanium, suffused with black DLC (Diamond-Like Carbon), bestowing the watch with a stealthy appearance.

A sapphire crystal ‘box’ is positioned front of house, as well as to the rear, coaxing light to illuminate the case interior, thereby augmenting readability. The movement eschews a main plate, sitting between both panes of sapphire crystal and seemingly floating in mid-air.

The Three bridges – an iconic signature of Girard-Perregaux – span the dial, formed of titanium with black PVD (Physical Vapour Deposition) treatment and polished angles. This unique design endows the timepiece with an airy appearance. It also delivers breath-taking views of movement components ordinarily hidden from view.

While Girard-Perregaux has a long history of making the invisible visible, in this instance it has ventured off-piste. The Tourbillon with Three Flying Bridges – Aston Martin Edition boasts a movement that appears to levitate within the case. This is achieved by paring back the movement, causing the main plate to seemingly disappear, creating the illusion of the movement flying within the case. It was this particular characteristic that led to the term ‘Flying Bridges’.

The cage of the tourbillon, positioned in the lower portion of the dial, is ‘lyre-shaped’, a characteristic found on all the watchmaker’s tourbillons dating back to the 19th century. A blued hand affixed to the cage imparts the running seconds. The tourbillon cage, measuring a mere 10mm in diameter, is composed of 79 components which collectively weigh only 0.25 grams. This remarkably low figure helps mitigate energy consumption.

Both Girard-Perregaux and Aston Martin have ensured the timepiece retains elements from both brands. The strap epitomises this collaboration, presented in black calf leather and featuring Rubber Alloy, an innovative rubber insert injected with white gold. The design of the strap is intended to evoke thoughts of racing cars of the past.

Limited to 18 pieces, the Tourbillon with Three Flying Bridges – Aston Martin Edition, is available worldwide at all authorised Girard-Perregaux retailers.

A Look At Rolex And Its Spirit Of Endurance In Motorsport

These New Edifice Watches Are Perfect For Scuderia AlphaTauri Fans