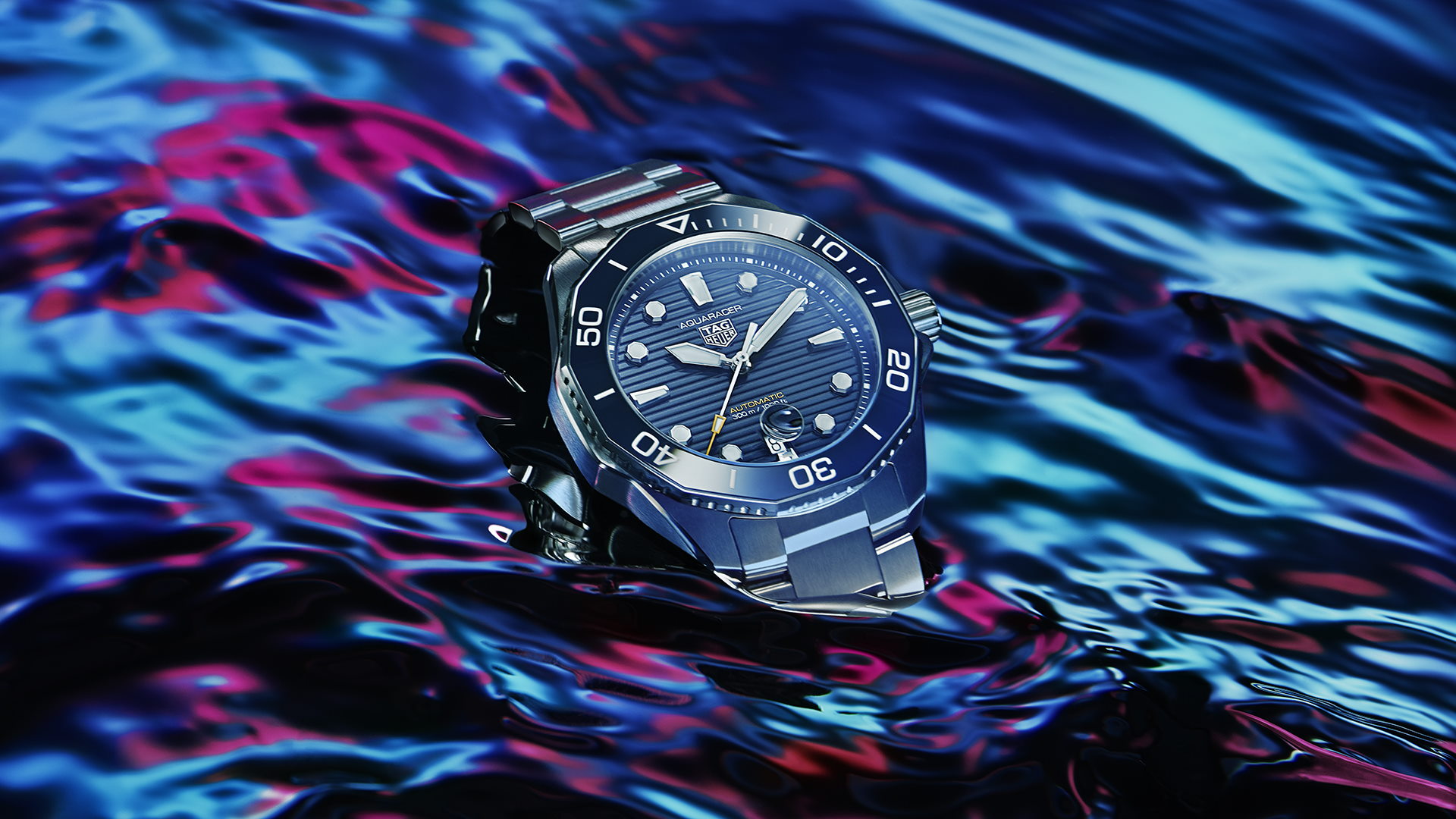 TAG Heuer Makes A Splash With The Return Of The Aquaracer

At Watches & Wonders 2021, TAG Heuer revealed the Aquaracer Professional 300, marking a significant step forward for the model. The journey of the Aquaracer began in 1978, and it immediately charted a legacy as a reliable diver’s watch.

The Heuer Ref. 844 offered a memorable dial design with a red 24-hour scale. It featured prominent lume-filled hour markers and a rotating divers’ bezel with a crystal-clear minutes scale for safely timing dives. It set the standard for reliable diver’s watches and was adopted by professional and recreational divers all over the world.

Forty years on, TAG Heuer has unveiled a new model that continues that legacy. Like models before it, the Aquaracer Professional 300 stands as a high-performance, stylish, luxury tool watch. However, the brand has also gone beyond the edge to produce the new model. By providing it with a bright new look and new materials the Aquaracer now has a new lease of life.

Built For A New Generation Of Explorers

TAG Heuer designers worked with six signature features of the Aquaracer, updating and upgrading them. To start, the team turned to the most visually arresting and immediately recognisable element of the watch – its 12-sided unidirectional rotating bezel. The basic form was evolved by integrating a scratch-resistant ceramic insert across the collection. The fluting of each of the 12 facets affords a better grip for the bezel.

They also went under the skin, re-engineering the bezel’s internal tooth profile so that the rotating mechanism becomes smoother, quieter, and easier to set. The result is a highly ergonomic device that delivers tangible improvements to the watch’s functionality.

All references in the new collection are powered by TAG Heuer’s Calibre 5, an ultra-reliable Swiss-made, automatic mechanical movement that drives hour, minute and seconds hands and a date, which is now positioned at 6 o’clock, in keeping with the design codes of the new generation of TAG Heuer watches. Every model has a solid case back and provides water-resistance to 300 metres (30 bar).

The sapphire crystal of the new model is also upgraded, integrating a magnifier over the date at 6 o’clock into the underside of the crystal so that the surface is smooth to the touch. This simple but effective forward step also makes the date easier to read from wider angles.

The bezel’s silhouette was then used to inform further elements of the Aquaracer Professional 300’s design, so that it now has eight octagonal hour markers and a 12-sided crown. Further improvements were then made to the overall look and legibility of the watch.

The new model has a wider, more sword-shaped hour hand (reminiscent of the last of the TAG Heuer 2000 Series, introduced in 2004) and a narrower minutes hand to create a clearer distinction between the two hands in low-light conditions.

Combined, these small details become significant, because they deliver greater legibility, even in extreme conditions where visibility is greatly reduced.

Recognising the new diver’s watch needed to be adaptable to multiple environments, designers looked for a thinner and lighter overall form. As such, the case, bezel, and metal bracelet have all been slimmed down.

This was done with zero compromise on the watch’s core performance features. The new watch’s lugs are now shorter, while the case edge has been chamfered and polished, which refines the overall design. As a result, on the wrist, the watch now has a more sophisticated and ergonomic profile.

Each model is attached to an integrated metal bracelet design, equipped with a highly sophisticated fine adjustment system that can extend or reduce the bracelet length by up to 1.5 cm. This enables wearers to resize the bracelet so the watch can be worn over a wetsuit or adjust the bracelet size to cater for changes in climate or temperature, without taking the watch off.

To complete the Aquaracer Professional 300’s look and feel, the designers returned to the famous scaphander diving suit that first appeared on the Aquaracer case back in 2004. The familiar, authoritative motif continues to underline the value of the watch to its users as well as its underwater credentials.

At launch, there will be seven references of the new Aquaracer Professional 300 available in two sizes in the core collection. Four references will have a 43mm case diameter, and three will feature a case measuring 36mm. Each has a uni-directional rotating divers’ bezel with a ceramic insert and an engraved minutes scale.

Material choices include stainless steel with the choice of black, blue, or silver dials. There will also be a 43mm piece in high-tech matte Grade 2 titanium with a green dial. The stainless-steel models have either a black or blue ceramic bezel insert with a white triangle at 12 o’clock filled with blue Super-LumiNova. The titanium model will offer a green ceramic bezel insert with a yellow triangle at 12 o’clock. Every indication on its minutes scale is filled with blue Super-LumiNova to maximise low-light visibility.

To give the watches the bold sophistication established as a core principle during the concept phase, all seven references have been given stylish engraved dials. The 43mm models carry over one of the signature design cues from the outgoing Aquaracer, namely the dial’s engraved horizontal lines.

The dials on the smaller 36mm models are engraved with a wave pattern, which was introduced in 2019. The blue 36mm model also has eight diamond hour markers and polished central bracelet links.

Dive Back In Time

In creating this watch, TAG Heuer’s designers mixed a high-tech Grade 5 titanium case with several visual elements from the archive piece. The flat black dial carries the Ref. 844’s red 24-hour scale, which was originally intended as a quick conversion chart for on-the-field professionals reporting the time against the 24-hour clock.

The watch also has vintage lume and a black perforated rubber strap based on an original design created to allow water to swiftly pass between the watch and the wearer’s wrist. In keeping with the watch’s repeating-facet design code, those perforations are octagonal.

Only 844 examples of the Aquaracer Professional 300 Tribute to Ref. 844 will be made.