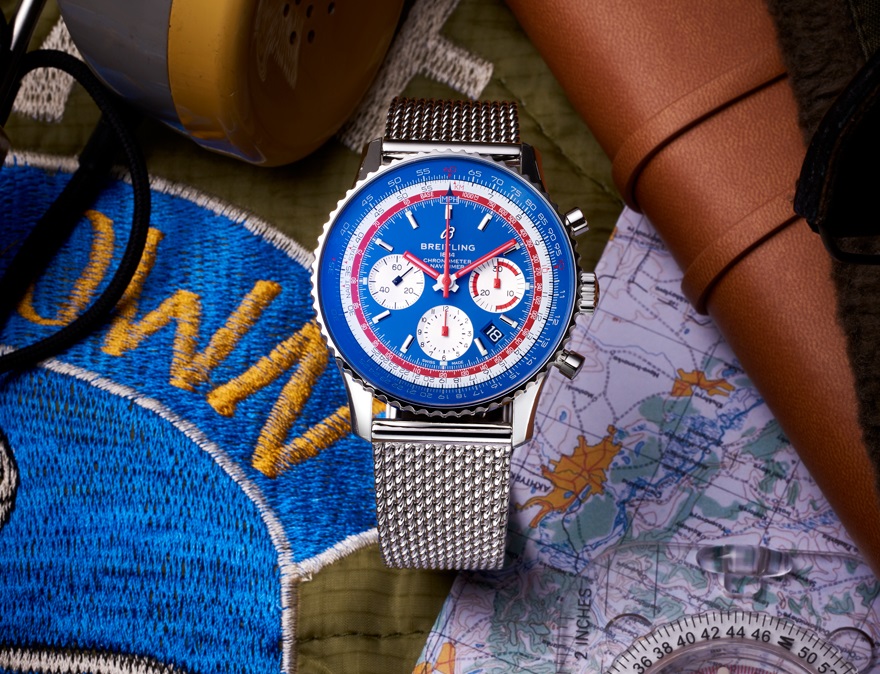 This Navitimer is Breitling’s tribute to Pan Am

First introduced in 1952, the Navitimer is one of Breitling’s most recognisable icons and practically synonymous with the brand itself. The original Navitimer drew its inspiration from the Chronomat that was then already in production, but was designed specifically for pilots. Its name, a portmanteau of “navigation” and “timer”, points to its intended usage as a timing instrument in the cockpit.

The Navitimer of Yore

To that end, the watch was equipped with two critical features: the chronograph and the circular slide rule. The former is easy enough to understand – various flight operations must be timed to the second, and a wrist-worn chronograph meets this need perfectly. The latter, on the other hand, is essentially a mechanical calculator. By turning the bidirectional rotating bezel to align the flange’s markings with those printed on the outer dial, calculations can be quickly made, even those involving multiplication and division. Since digital calculators didn’t appear until a decade or so after the Navitimer’s introduction (and computerised systems even later), one can imagine just how useful the Navitimer was.

The modern aircraft’s instrument panel and flight systems are all computerised today, which has rendered the Navitimer obsolete. The watch, however, retains its legendary status as an instrument that pilots relied on in an earlier period of human flight – an authentic tool watch that ushered in and served through the golden age of aviation. Coupled with its distinctive design, it’s no wonder that the Navitimer remains a beloved icon.

The Navitimer 1 B01 Chronograph 43 Pan Am Edition

Breitling produces several versions of the Navitimer. The Navitimer 1 B01 Chronograph 43 Pan Am Edition ($12,500) featured here pays tribute to the eponymous airline, and is part of a trio in the brand’s capsule collection that also honours Swissair and Trans World Airlines. The watch is largely similar to the “stock” 43-millimetre version of the Navitimer, but comes dressed in Pan Am’s signature blue, with red accents for visibility. It also has a different set of hands that bear a design harking back to chronographs from the past. Everything else is familiar, from the busy yet legible dial to the pump style chronograph pushers, and even the beaded bezel.

Breitling has opted to equip this watch with its in-house B01 calibre, which is visually represented by the contrasting sub-dials. This self-winding movement is column wheel actuated for better tactility, and uses a vertical clutch that gives the chronograph seconds hand confident starts and stops. The movement is also COSC-certified, and has a 70-hour power reserve.