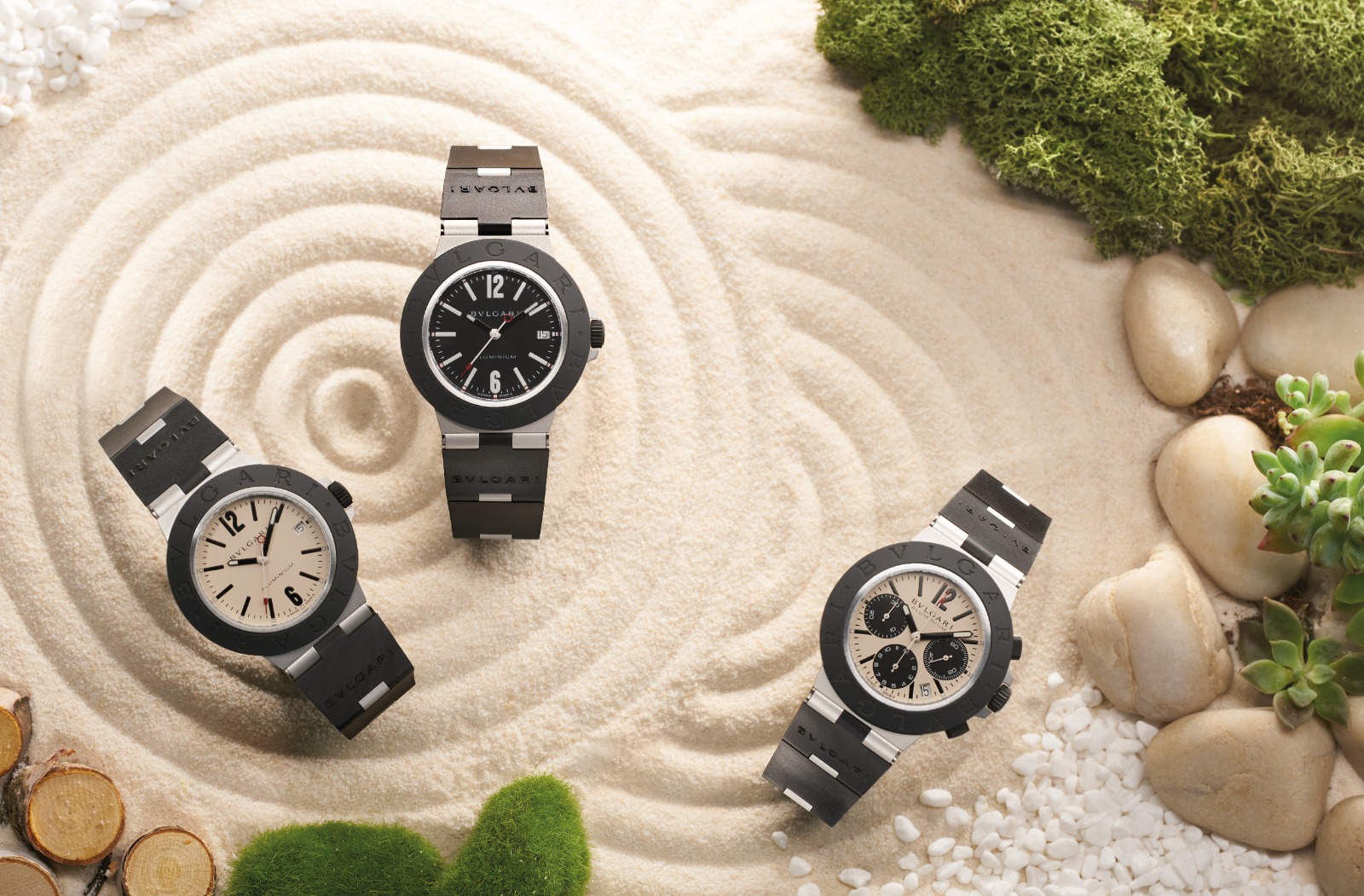 When Bulgari introduced its first timepiece with an aluminium construction in 1998, the luxury watch industry had a very different landscape. Watch designs back then were still fairly conservative, and the fad to develop increasingly crazier super-complications was not due to arrive for nearly another decade.

It took confidence – and boldness – to release a timepiece in such a material. Bulgari was, after all, relying solely on the strength of its designs by doing so; a luxury watch in something as common as aluminium didn’t just lack the inherent value that something else in gold or platinum had, but also demanded a change in mindset to be appreciated. This complete departure was a strong statement from a house that was better known for its usage of precious stones and metals, whether in watchmaking or high jewellery.

With the benefit of hindsight, Bulgari’s decision to do so was a prescient one. The current ubiquity of “alternative” materials ranging from composites to tantalum can be attributed to the experimentations that have taken place over the past few decades.

Bulgari was, of course, one of the pioneers that demonstrated the viability of these avant-garde materials and designs. Far from quitting while it was ahead, however, the house continues to push the boundaries of watch design today with timepieces such as the Octo Finissimo series, which presents different guises depending on its material.

As for aluminium? It remains a staple, with the new Bulgari Aluminium line marking the latest iterations of its usage in the brand’s watches.

The new Bulgari Aluminium line consists of just three references across two models – for now at least. Two of them are time-and-date watches executed in different colourways, while the third is a chronograph that is offered with a handsome “panda” dial. Aesthetically, these timepieces have retained the signature design elements of their predecessors, and thus trace a clear lineage back to them. A closer look will, however, reveal several visual and technical tweaks that haven’t just updated them for a modern audience, but also created stronger value propositions for seasoned collectors and first-time watch buyers alike.

A few key features of the original watch have been preserved, and the most important one is arguably the bezel, which has been emblazoned with Bulgari’s logo not unlike the classic Bulgari Bulgari timepieces. Together with the dial’s baton indices – with Roman numeral hour markers at 12 and six o’clock – the overall look is one of confidence that also harks back to the classical architecture of Rome, where the brand is based. This is further enhanced by the stark black-and-white colour scheme that’s also been maintained. It permeates the entire timepiece, almost as if colour would detract from the design-centric approach to the conception of the watch. Surprisingly, the overall design ends up being unisex; despite its penchant for sharp lines, bold surfaces, and an overall technical look, the timepiece skews towards neither masculinity nor femininity, and grounds itself with a casual urban sensibility instead.

Design vocabulary aside, both models of the Bulgari Aluminium have obviously been rendered in aluminium. What’s changed this time is the exact alloy used – Bulgari has opted for a tougher variant for greater durability, and sandblasted every aluminium surface to create a matte finish that’s especially contemporary. This has been complemented with rubber, which is used for the bezel and strap. Although it also bears a matte finish, rubber offers a contrasting colour and texture to aluminium, which yet again demonstrates Bulgari’s mastery over materials and designs. Interestingly, DLC-coated titanium has been used for the case back and crown. The choice of titanium makes sense given these components’ demand for robustness, and explains the watches’ 100-metre water resistance rating.

At 40 millimetres across, the new sizing of the timepieces gives them a certain elegance. The lugs have been reshaped to better accommodate this case diameter, and the cases remain fairly thin. Taken together with the aluminium-and-rubber construction and wide bezel, the watches actually wear smaller – and lighter – than their initial impressions may suggest.

This has to some extent been helped by the new strap design, which features additional “links” in lieu of a continuous piece of rubber. With these articulating “joints”, a closer fit to the wrist can be achieved, thus allowing the watch to sit flush to the wrist for greater comfort.

Internally, the Bulgari Aluminium line has also received upgrades, with the quartz movements of the previous collections replaced with mechanical ones. The time-and-date Bulgari Aluminium uses the self-winding B77 calibre, which is derived from the workhorse ETA 2892. The Bulgari Aluminium Chronograph, on the other hand, has been fitted with the B130 chronograph movement that’s based on the ETA 2894. What’s of note here are the movements’ sizes vis-à-vis the cases they are fitted in – although both these movements are fairly small, they’re well-integrated into their respective watches, with displays that are sized (and spaced) appropriately. It’s a testament to Bulgari’s design sensibilities, as well as its attention to detail.

The Right Time And Place

In terms of price positioning, the new Bulgari Aluminium watches can be considered entry level offerings from the brand. Part of this can be attributed to their materials, of course. These timepieces, however, shouldn’t be assessed via their prices alone. Their overall vibe is one of quiet, self-assured poise, and their prices belie the quality of their designs and construction. These are elegant understatements that are, nonetheless, also versatile choices for both daily or weekend wear. As mentioned, it takes confidence for a luxury brand to produce timepieces with common materials like aluminium and rubber. Likewise, it takes confidence for a man or woman to wear it.